Adlib Puts its Hands in the Air for Creamfields 2016 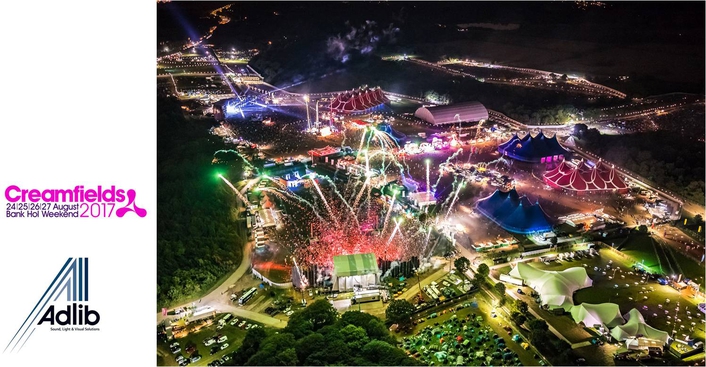 Liverpool based technical production specialist Adlib supplied lighting, sound and rigging to two main arenas –CF03, hosted by Armada, Cream and Smash The House; CF 05 AKA ‘The Curve’ due to the spherical shape of the tent and the production space … plus CF10, the VIP Hospitality area - at the 2016 Creamfields Festival.

The annual EDM extravaganza, one of the most popular in Europe and well known for its awesome line-ups, was staged at Daresbury Estate near Warrington, UK.
Working for creative production specialists LarMac LIVE – with production manager Ian Greenway assisted by Matt Smith and Molly Iredale -.and renewing their long and fruitful working relationship with Cream - an iconic ‘Liverpool Cool’ brand since the original club concept first germinated in 1992 - Adlib was very proud to catch the vibes again at this ground-breaking event which ups the production values each year. 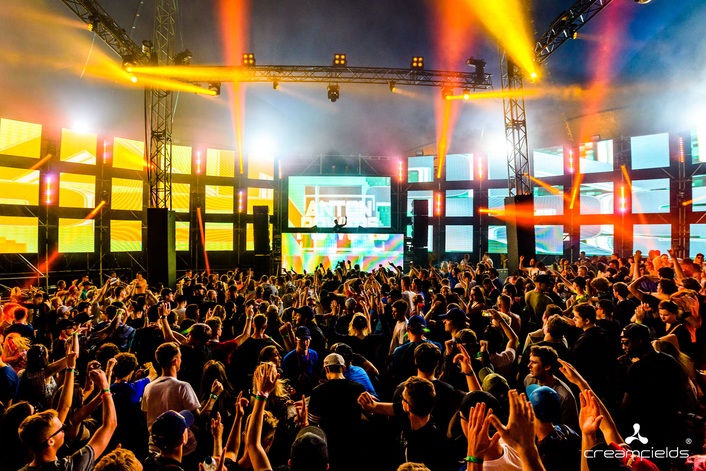 Leading Adlib’s team on site were project managers Kevin Byatt and Ian Tomlinson, with Ian also designing lighting for the three spaces alongside Ian Greenway from LarMac Live. They worked with a crew of 17 with everything on the sound side co-ordinated by Phil Stoker and additional sound design input in CF 03 from Hassane El Siahi.
As always, as much in-depth and detailed advanced planning as possible was a key to ensuring a smooth and efficient operation once everyone was on site. 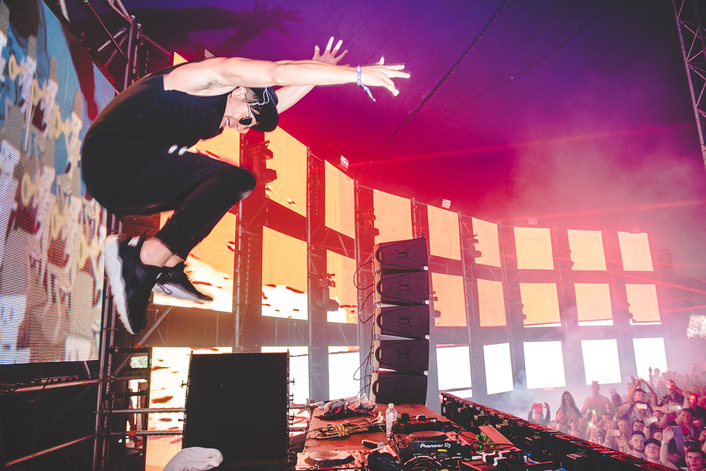 Lighting
A ground support system was installed around the stage at one end of CF 03, a large arena which featured incendiary performances by Armin van Buuren (ASOT), Above & Beyond, Dimitri Vegas & Like Mike among many others, and lighting was designed around the design requirements of the main artists.
As they were mostly working on practical festival-style riders explained Ian, this was achievable without having to undergo major overnight changeovers as has sometimes been the case in the past.

The lighting rig featured 150 moving lights – a combination of Martin MAC Viper Profiles / Washes and Auras and Clay Paky Mythos – to match the specifications, and these were distributed between the stage ground support and over the audience on two long trussing running the length of the room.
On top of that were the must-have quotas of strobes and blinders, which included 18 of Adlib’s new Chauvet STRIKE 4 warm white  LED blinders which were dotted around the front of the ground support.
Two LED battens provided discreet front light for the DJs, and all of this was run off a grandMA2 full size with a grandMA2 light for backup.

A second grandMA 2 light was set up at FOH running WYSYWIG which allowed guest LDs to squeeze in a little bit of additional programming time, which was much appreciated at peak times when the schedule was intensely busy with one guest LD after another arriving ahead of their artist’s set … and this facility allowed them a little bit of time to at least get their basic looks into the desk.
CF 03’s lighting crew chief was Charlie Rushton, Tom Webber was the main Adlib lighting operator and the techs were Jeff Bond, Peter Lea and Jordan Willis.
In CF 05, The Curve was created out of a Layher scaffolding system which provided rigging points for multiple LED video panels curving around the edge of the arena, creating a dynamic and different look, so Ian took a similar approach with the design.

Tucked away behind the main stage, the VIP hospitality area provided a chilled environment for artists and those with VIP access wanting some respite from the full on intensity of the event.
The VIP / Hospitality space was made up from three saddle span tents butted up together at the apex points, an interesting shape that needed a lateral solution for lighting and rigging, so Adlib rigged a circular truss flown from all three apexes, which was used as a common platform for fixtures that could throw light into all three tents.
Twelve Chauvet MXT1s were prominent on the circle, with 24 x Chauvet Slim PARs illuminating the tent canopies and 12 x ChromaCubes on drop-steels were also hung off the circle providing a bit of eye-catching sculptural content.
These were run via an Avolites Tiger Touch II desk and CF10 lighting crew Jon Priest who worked with technicians James Bailie and Ash Dawson

Audio
In CF 03 Adlib collaborated with Hassane Es Siahi – a regular Adlib engineer and live sound  producer for the legendary David Guetta for several years - who has added his magic to the mix.
An L-Acoustics K2 rig was specified, 24 elements in total, with two left and right main arrays flown off the ground support wings plus some delays along the audience trusses which spanned the arena lengthways, providing a perfect solution.
L-Acoustics ARCS speakers were used for infills … with 24 x SB28s ground stacked across the front of the stage giving some serious sub-frequency presence.

The FOH console was a Soundcraft Vi3000, with another one for monitors together with L-Acoustics Kara & SB18s speakers for the DJ.
A package of Shure RF mics completed the audio in this busy and popular arena.
In CF 05 four ground stacks each of 6 x Coda AiRAY cabinets were utilized, their positioning dictated by the curve of the stage set and video wall, with two stacks each side of the DJ and two stacks further out on the wings of the video panels.
The system produced a nice, rich even coverage all around the arena which fueled some roof-raising performances from Paul van Dyk, Sander van Doorn and Laidback Luke among many others over the weekend.

Twelve Coda TiRAYs were used as infills alongside 24 x Coda SCPF subs.
The DJ monitors were L-Acoustics dV-DOSC speakers with 2 x dV-SUBS underneath per side … so no chance of any lack of bottom end!
The consoles onstage and at FOH were both Midas PRO2s. The audio techs in here were Steve Norman and Ean Rooney.
Coda was again the Adlib system of choice in the Hospitality Area, with 8 x Coda AiRay making up the main arrays, augmented with 6 x TiRAYs for out-fills.
A separate smaller exclusive VVIP area was fed an audio feed from the main room via a K-Array Kobra 202 system that provided a background music ambience.
Concluding another highly successful, interesting and fun Creamfields, Adlib Account handler Ian Tomlinson says, “We enjoy a great working relationship with Ian Greenway from LarMac Live and all of the team at Cream. As we’ve all worked together so much over the years, the ideas and knowing what works and what doesn’t is a really smooth process. Everyone is so ambitious & passionate about wanting to better the previous year making it a very exciting environment in which to work.”