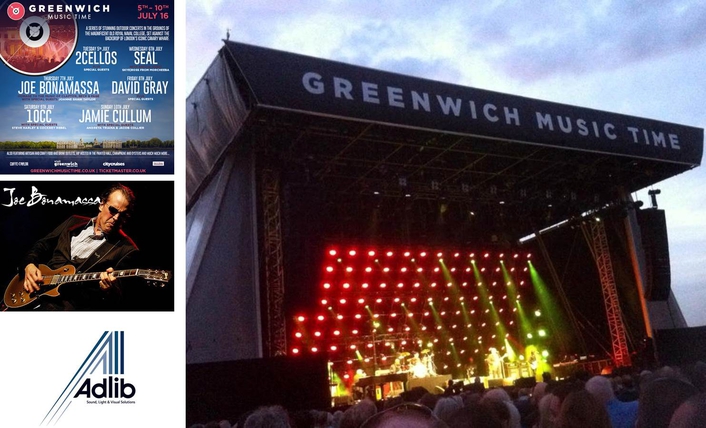 Adlib again delivered lighting, sound, rigging and crew for the recent UK and European tour by amazing blues rock guitarist Joe Bonamassa and his band, which culminated with a headline show - recorded for DVD - at the ‘Greenwich Music Time’ festival staged in the grounds of London's historic Old Royal Naval College.

Adlib’s Lighting Manager Dave Eldridge co-ordinated the lighting requirements for Bonamassa’s regular LD Justin Duguid for the UK section of the tour, while Adlib Director Dave Jones looked after all things audio for both the UK where a full sound rig was supplied and Europe where the tour continued with a control package. Eric Roa is the tour’s incredible Production Manager and Charlie Rushton was the main Adlib Lighting Tech out on the road, with Mark Johnson as the main Adlib PA Tech.

The musical thread for this tour was “British Blues Explosion” with the music of Eric Clapton, Jeff Beck, Jimmy Page plus a selection of Bonamassa’s own hits including ‘Sloe Gin’. The band line up featured four renowned artists, all famous in their own right.

Charlie has been working with Bonamassa’s production in the UK since 2012 – they usually do a spring tour every year and a summer or fall project alternating years.

On this one, they started with four 48 ft. Prolyte S30 pre-rigged trusses for lighting.

The front truss was rigged with 10 x Vari*Lite VL3500 Washes and nine 4-lite Moles pointing into the audience, and the upstage three were all identical and loaded with 8 x Clay Paky Mythos and 14 outrigged scaff bars, each clamped with three Martin MAC Aura LED washes – making 126 Auras in total.

The idea was to create a slanting back wall of lights that introduced a lot of depth to the picture, accentuated further by having the three trusses staggered at different heights which looked highly effective!

The idea originated from producer/director Kevin Shirley, who was inspired by a dramatic old concert photo with a wall of PAR cans at the back. He shared this photo with Justin who then came up with a contemporary solution using the Auras to achieve a similar look.

Horizontal scaff bars running the length of these three trusses were attached at the back with Reutlinger adjustable steels. The vertically orientated Aura bars were then clamped to the front rail of the truss and the outrigged bars at the back, which allowed the back bar to be tweaked in height to allow for variations in venue spaces. 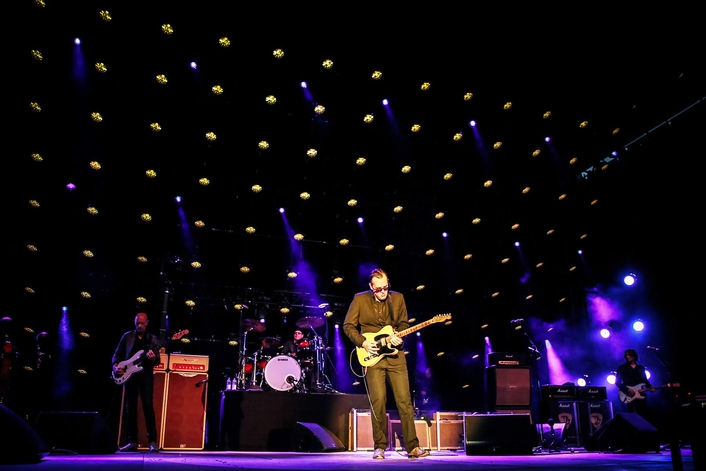 It was a bit of a brain-teaser in pre-production, working out the optimum angles and spacing to get the effect Justin wanted, and the clamps on the Aura bars had to be offset so when they were all rigged on the truss it would be correctly balanced with the centre of gravity under the bar so it remained straight.

“At last I realised why we learned trigonometry at school,” declared Charlie who enjoyed dealing with the additional mathematics!

At the ends of the trusses – both upstage and downstage - were custom frames each rigged with six V*L500s for side lighting. These frames were independently flown on four quarter tonne motors. The lights had a triangular configuration with three at the bottom rail, two in the middle and one at the top.

There were another eight 4-lite (square) Moles on the deck along the back of stage that shone through and silhouetted the band dramatically in the smoke.

MDG’s theONE hazer was provided for atmosphere and Justin programed and operated the show on an MA grandMA2 full size console with onPC as a backup.

The venues were a mixed batch – for the first one at Dublin’s Vicar Street, only the console and MDG’s theONE hazer went in, and just before that, there was a special intimate performance for hardcore fans at Liverpool’s famous Cavern club where they utilised the house rig. The first full production gig at Hoghton Tower near Preston had to be moved inside to Preston Town Hall due to weather conditions... but everyone took all this in their stride.

Charlie was joined by Adlib crewmembers Jeff Bond and Jordan Willis. “It was a brilliant tour in all respects, great atmosphere between everyone, all the shows were sold out and the music was excellent”. 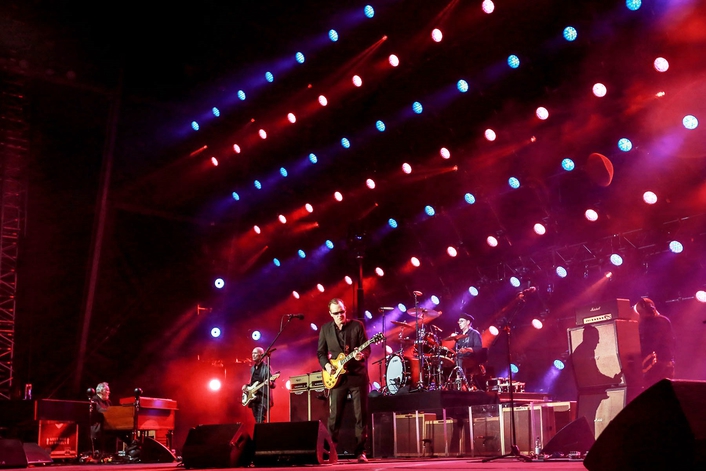 A full PA system in the UK comprised – in its largest format – of arrays of 8 x L-Acoustics K2 underneath four K1 a side, a design developed by John and fine-tuned exactly to Bonamassa’s demanding requirements.

Side hangs of K2 were added if needed for venues like Preston Town Hall which is very wide, and the out-hangs were essential.

The design didn’t require any subs, which is a bit of a departure, but the combination of Bonamassa’s playing and Scott’s mixing really optimises the low end frequencies of the K1 and K2 … to the point that they don’t need any additional sub reinforcement and all the potential sonic distractions these can bring.

“They have honed this technique and it works brilliantly,” declares Mark.

They carried L-Acoustics ARCS speakers for in and out fill as needed and KARA for lip fills.

Adlib supplied a DiGiCo SD10 for Scott at FOH – he keeps his mix straightforward with no plug ins.

Matt specified a Midas H3000 for monitors - Adlib keeps a couple in good working order for analogue requests like this. Both Matt and Joe Bonamassa love the console for its richness and warmth.

Joe has a few of pairs of d&b M2 wedges for monitors, which he loves for their tonality. Usually the front pair are for his vocal and a hint of guitar, then there’s a pair behind with the general band feed, plus a pair on the downstage edges of stage, firing across for a bit of fill.

Adlib supplied a standard mics package and the band also brought their own.

“They are an absolute pleasure to work with” says Mark, “All consummate professionals who know exactly what they want and how to ask for it”.

Challenges for audio also included the Cavern Club showcase where they had less than a quarter of the standard stage space they usually take up. The control package only went in to this show.

The Greenwich gig provided the perfect setting for the DVD record - a fantastic backdrop with beautiful buildings and amazingly – and rare for the UK - proper summer weather.

For Europe Mark accompanied the control package for which the set-up was extremely well organised and geared for 30 minute changeovers in the case of their festival headliners which interspersed with own show headliners.

Adlib Director and account handler Dave Jones stated, “We’ve been lucky enough to work with Eric and his brilliant team for many years now, it is honestly a pleasure. The live shows have grown over the years and Joe Bonamassa has proven to be one of the best guitarists & performers out there on the live scene.”