Francis came to the table with a scheme to match the energy and ebullience of the band’s live shows.

Brixton was the biggest venue on the tour, the showcase gig and a huge deal for the rising star band, so the lighting was based on this space, but the rig also had to be adaptable and scale-able to fit all the other venues which included a round of academies … and still look amazing!

Says Colour Sound’s H (Haydn Cruickshank), “Francis is very talented, he has an excellent eye for aesthetics and a fantastic feel for music. All his designs are fresh and interesting, and it was a great pleasure to be the supplier on the different legs of this one”.

Slaves toured through most of the latter part of 2015 in support of their acclaimed debut album, “Are You Satisfied?”

Francis explained that the band like the stage to be open and clear of clutter so they can maximise the space and zoom around, so this was at the essence of the design, with lighting flown above, and floor kit positioned in an arc upstage of their performance area and well out of the way!

The other proviso was that they wanted it to look chaotic and random in keeping with their vibe.

Francis decided to light the set using whites and colour temperature variations with only a few colours occasionally introduced, so the positioning of fixtures – for all the apparent craziness of the design – was super-important. “The lighting had to look exciting and different right through the set, even though it was primarily in one colour,” he stated.

However, he didn’t have to worry as the design produced a massive amount of dynamics and many contrasts, sometimes being as much about the blackness as the light!

A series of 3 and 4 metre trusses were installed in the roof at jaunty angles on 20 points, some sub-hung below each other, all in a consistently anarchic style!

The 10 angled trusses were each populated with four ProLights Diamond 7 LED beam fixtures – Colour Sound has a quantity of these great value products which Francis loves and has used on PSB and also Snarky Puppy. They created great four-finger ACL-style and other rock ‘n’ roll punctuations.

The rest of the fixtures were scattered around, by his own admission, it was “a bit of a pain” to rig everything, but the Colour Sound crew of rigger John Lahiffe and Stu Barr took everything in their stride. Francis was also assisted on the tour by LX tech Tom Taylor.

There were 20 x Martin Atomics for the strobe-tastic moments and 24 x Showtec active 2-lite blinders dotted around, all adding to the improvisational nature of the show, which Francis ran completely ‘live’.

The BMFLs were chosen because he wanted a big, bright, bold spot light to cut through the full-on wall of effects, strobing and blinders, and to spot the band in stark whites at various points. 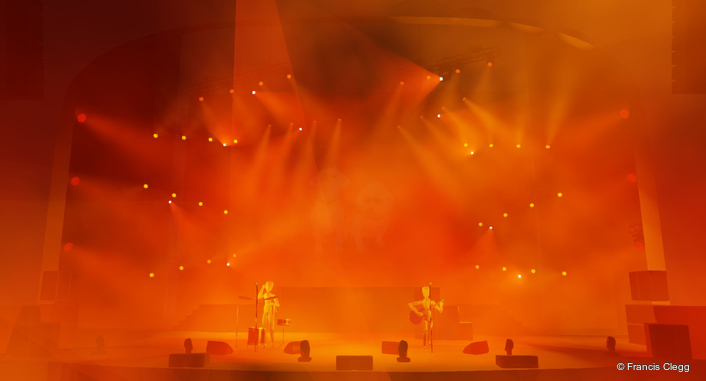 There was no front truss, but Colour Sound supplied two Robert Juliat Super Corrigan follow spots for picking up the two band members – a task that kept the operators on their toes!

The set started with minimal lighting and a 50ft wide mid-stage cloth on an electric kabuki in for the first few songs, which then dropped to reveal the majority of the rig behind.

Francis ran all the lighting on an Avolites Sapphire Touch with a Quartz running as backup supplied by MIRRAD.

“It was brilliant – as always – working with Colour Sound,” comments Francis, “the people are great, the workflow is very efficient and everything runs smoothly … with lots of smiles!”