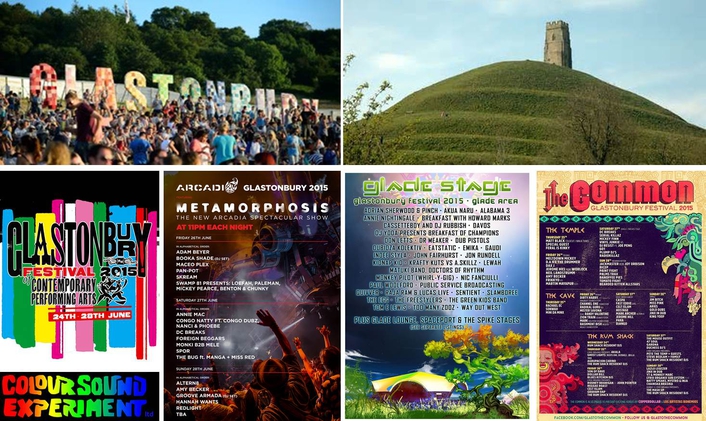 .
West London based lighting and video rental specialist Colour Sound Experiment supplied  lighting and visuals equipment to some of the coolest, most creative elements of another hugely dynamic 2015 Glastonbury Festival of Contemporary Perfuming Arts …  including Arcadia, Block 9, The Common and The Glade.

The crew of 25 was chiefed by Andy Melleney, and in addition to these key areas of the site, the company also supplied the touring lighting rig for Friday night’s Other Stage headliners Rudimental (LD Jonny Gaskell)… and kitted out over 20 major bars around the vast site with practical and effects lighting. 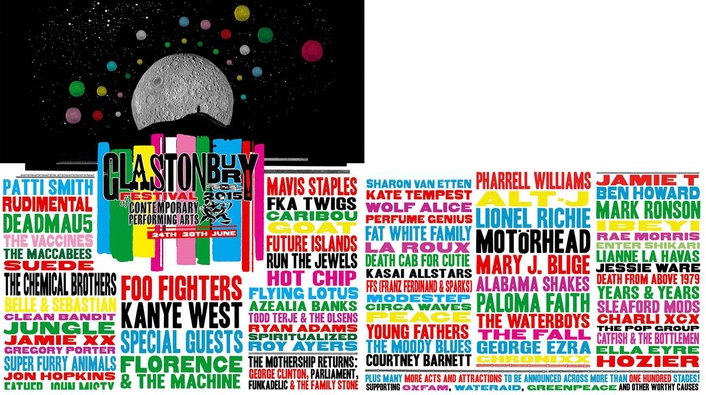 Colour Sound’s Hayden Cruickshank commented, “Being involved in some of the edgier more off-beat and imaginative elements of the Festival is always exciting. The event continues to be loved and appreciated worldwide for offering the most diverse and interesting performance experiences for so many people … and we are very proud to be part of it!”

Arcadia Spectacular
Arcadia’s awesome new immersive spectacular “Metamorphosis” saw the return of the giant spider to the lay-lines of Worthy Farm in Pilton, Somerset, complete with three new mini spiders, the Lords of Lightening and a jaw-dropping 30 minute show uniting the cultures and spirit of rave and theatre with some serious technological wizardry! 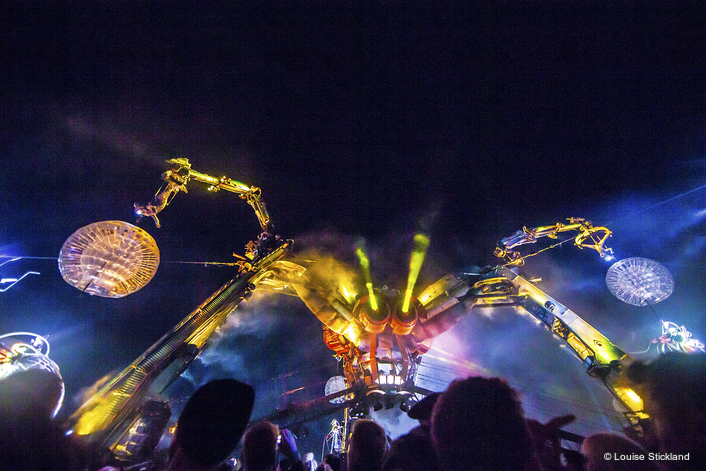 All of this was played out in mega style and energy to a thumping soundtrack, aerial stunts and breath-taking visual audacity.

Lighting has been evolved by the Arcadia team and Colour Sound worked closely with their Technical Production Manager Tim Smith and supplied technician Stuart Barr to co-ordinate all the kit with the Arcadia crew who rigged it.

Four Robe Pointes were attached to the spider’s three legs with another 10 units deployed on its belly, underneath the DJ booth. 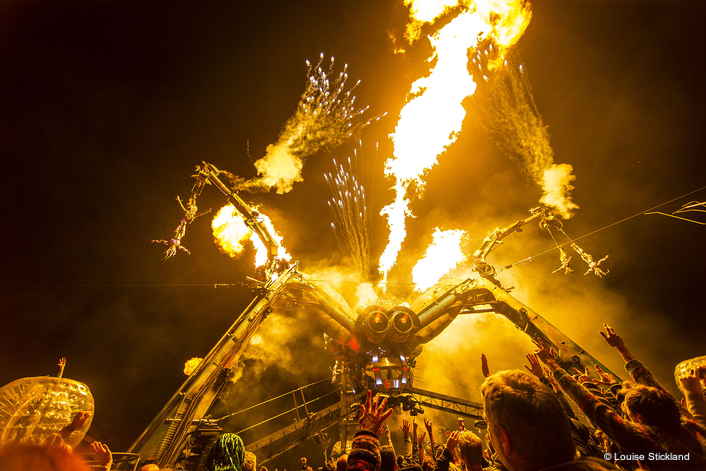 Over 70 Dragon LED PARs were used to light various scenic elements of this incredible structure, with Clay Paky Alpha Beam 1500s making the piercing – and somewhat scary – eyes, of which there are 3 sets for the full 360 effect!

Block 9
Lighting designer Alan King of Rockin’ Horse ensured that all three main scenic sculptures constituting the Block 9 ‘hood received careful and considered lighting and visual treatments as this vibrant area came to life as another nucleus of Glasto ‘after dark’ action. This was overseen for Colour Sound by Toby Lovegrove. 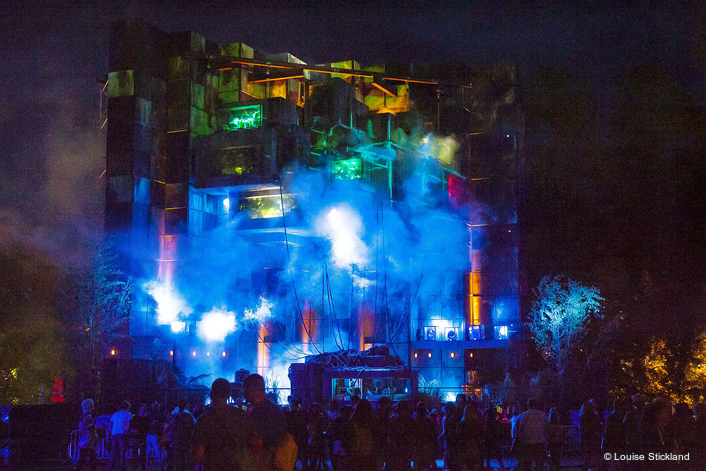 The derelict post-apocalyptic industrial Genosis power plant – a 50 ft. high sculpture crafted with incredible detail was lit with 17 x Robe Pointes, 16 x LEDWash 600s and 9 x Atomic strobes which were secreted in the pods and on the floor, hidden by foliage. The pod windows were illuminated by around 30 Chauvet Colorband Pix LED battens.

Alan was the main lighting operator for Genosys, utilising a ChamSys MQ300. Lasers were supplied by ER and the projection mapping onto the building was co-ordinated by Green Hippo. 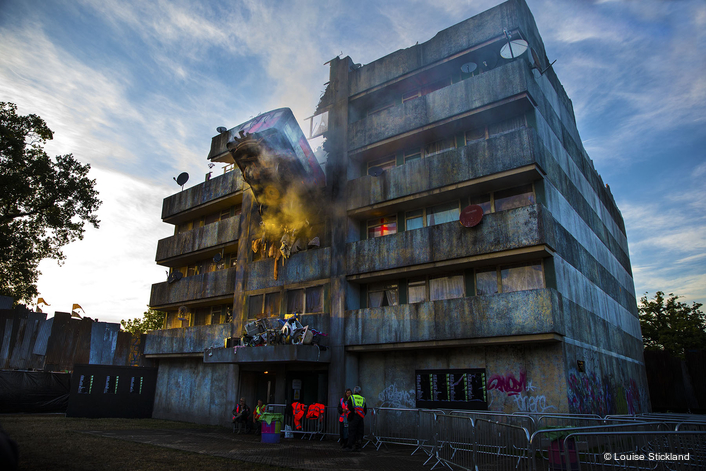 Adding atmosphere and excitement to the stage and dancefloor inside were i-Pix BB7s on the floor worked into a fabulous visual scheme with a grid of Laser Rays from ER traversing the ceiling.

Opposite, the stage and dancefloor in the eclectic NYC Downlow building had a lighting rig comprising Robe Scan 575s, Diamond LED beams and LED PARs woven into an onstage structure of LED battens from Light Initiative. The exterior was lit with more LED PARs and MBIs.

The Glade,
tucked away beneath its regular clump of elegant poplar trees provided an intimate haven for the very best electro beats, as Colour Sound continued its long term working relationship with the organisers via lighting designer Jasper Johns of Fruit Salad Lights. 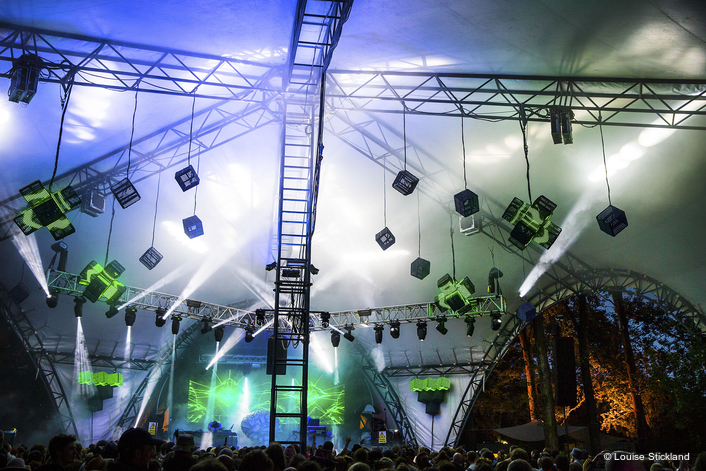 A network of trusses was flown from the Glade’s stylish tensile roof superstructure, loaded with 24 x Robe Pointes which were right at the heart of the action – a multi-purpose fixture that is perfect for this semi-tented environment. They were joined by 8 Atomic strobes, SGM XC5 LED strobes and a 6 x 4 metre surface of 6 mm HD LED screen made up from Colour Sound’s new proprietary BT6 product.

Jasper created designed and ran the video control from the FOH nerve centre and also created some of the content. A set of eye-catching LED cubes from Vortex Events were flown and controlled separately. Completing the visual picture.

The Common
Encapsulating the true spirit of Glasto, this was a completely new area for Colour Sound this year, brought in by lighting designer Alan King of Rockin’ Horse to provide kit for four fully-scheduled performance areas - The Temple, The Cave, the ACAB bar and the Rum Shack. 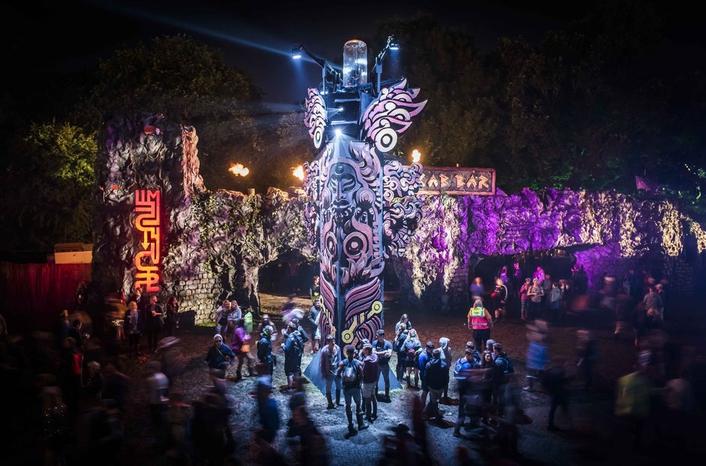 Colour Sound is busy supplying lighting and visuals to over 50 festivals this summer, but Glastonbury continues to provide a unique, memorable and very special experience for everyone involved.