Steve Angello – innovative international DJ and music producer – doesn’t believe in doing anything by halves, and so asked his lighting designer Jon Trincas to create something spectacular, full-on and completely unique for his pumping headline set in the Size Matters arena Creamfields 2015, the UK’s premier EDM festival.

The fabulous looking PATT 2013 luminaire – a cool fusion of retro styling and contemporary technology – designed by leading UK lighting designer Tim Routledge ... is now being manufactured in the Czech Republic by Robe.

At Creamfields, the 48 units were rigged on twelve 25ft high upright pre-rigged truss towers, each of which was loaded with four PATT 2013s together with an array of moving lights and blinders. 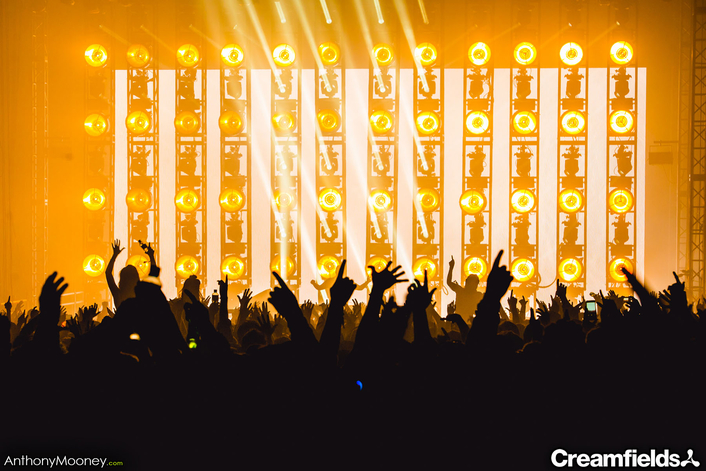 This is one of the largest collections of PATT 2013s used in a single show to date. They formed a grid that Jon was able to map through his grandMA2 lighting console allowing him to produce a selection of mad, quirky and trippy effects!

PATT 2013 contains a 750W tungsten softlight housed in a striking spun aluminium body accentuating its curves, complete with a bright, reliable 750W HPL lamp which really rocks! It produces an excellent output and looks amazing, so it can also be utilised as a practical / scenic lighting element for any show.

It was the first time that Jon has used the units on one of his own designs, although he’s seen them in action on a few others. He chose them for their sublime scenic appearance as much as for the light output and what he could achieve in terms of effects. 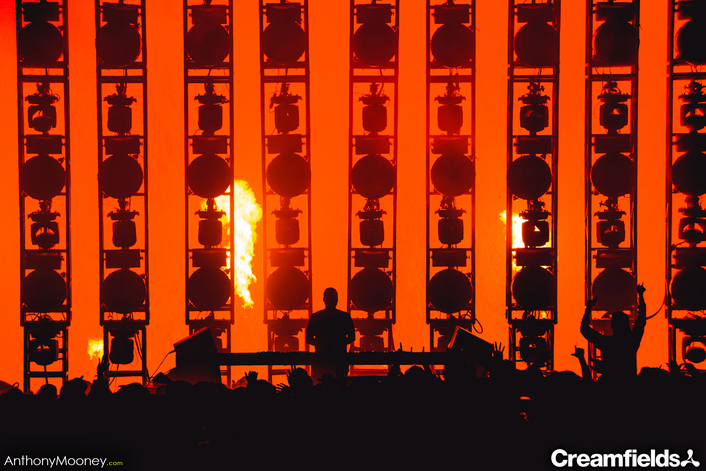 It was the first time that Jon has used the units on one of his own designs, although he’s seen them in action on a few others. He chose them for their sublime scenic appearance as much as for the light output and what he could achieve in terms of effects.

“Steve really likes to see big classic rock ‘n’ roll looks and he loves tungsten … so I reckoned he’d appreciate these fixtures,” explained Jon.  Sure enough when they discussed the show visuals and Jon showed him what the PATT 2013s were capable of, they were ON for an appearance!

With PATT 2013s so prominent on the rig, the wall of lights took on a more theatrical and less heavy metal edge which worked perfectly with the vibe of Angello’s incendiary set.

Jon was extremely impressed with their performance and states, “I’ll definitely be using them again”.

The wall of lights was covered by a kabuki drape during the day which dropped as Angello took to the stage. Upstage there was a 40 ft wide by 18 ft high LED wall which silhouetted the industrial looking framework of the trussing metalwork highly effectively introducing another layer of depth to the whole visual production.

All the lighting equipment for Steve Angello’s set was supplied by Basingstoke based production company, Zeal Live. On-site, the technical production for Size Matters was co-ordinated by Mike Oates.

Angello’s performance was one of the highlights of a weekend extravaganza with another sizzling line-up of some the best EDM performers on the planet who made their way to Daresbury near Runcorn, UK, for the annual pilgrimage.