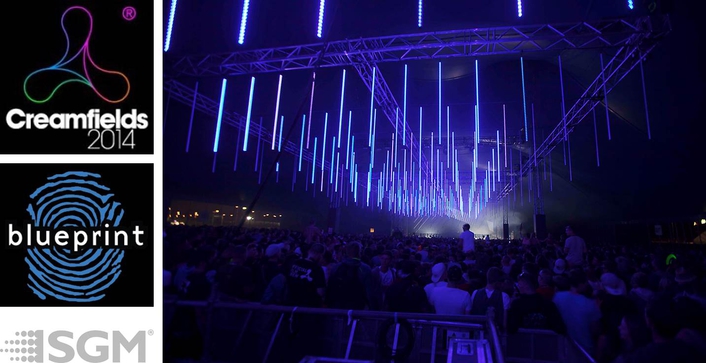 Massive overhead mappable display by Blueprint Events for Steve Angello
Taking its inspiration from the 2013 Pukkelpop Festival in Belgium, which saw the first deployment of Blueprint Events’ SGM LT-200 3D mappable LED pixel tubes, Chris Morgan’s company has now delivered what he believes to be the largest SGM tube matrix ever seen in the UK — at the high profile Creamfields 2014 in the north of England, over August Bank Holiday weekend.

Reports Chris Morgan, “The Events Company UK were looking for something a little different to make Steve Angello’s set really stand out and designed these moving grids, populating them with 3D mapped tubes.” 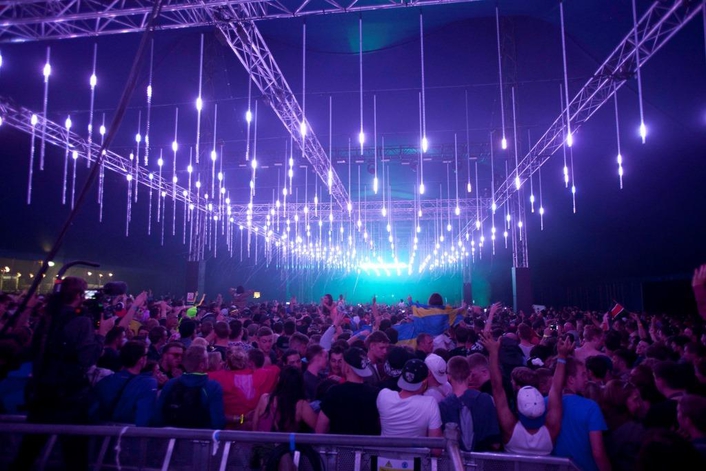 Events Company UK selected Madrix as the optimum control platform for the tubes due to the flexibility in creating content and the unique ability to map the tubes in 3D.

Blueprint’s Toby Shipway programmed and operated the tubes, requiring 140 DMX universes to create effects that were mapped individually on the three grids, before combining the maps to fill the room in a single continuous grid.

These grids themselves were raised up to the roof so that the LT-200s went unnoticed during the preceding acts, before being dramatically lowered for the main set.

Via the Kinesys motion control, the three grids could then be raised and lowered over the heads of the audience independently during the show to the amazement of all.

The entire show was conceived and implemented in around two weeks, with the Kinesys control and rigging designed and programmed by The Events Company UK’s Mike Smith.

The installation itself was carried out through the night so that the LT-200 pixel tubes were only in situ for the Saturday night and gone by the next day.

Looking back at the event, Chris Morgan said, “Although it was a tight deadline the planning by The Events Company UK made implementation a breeze. Having such a large stock of SGM products is essential in order to put these designs into practice, and allow for any last minute developments.”