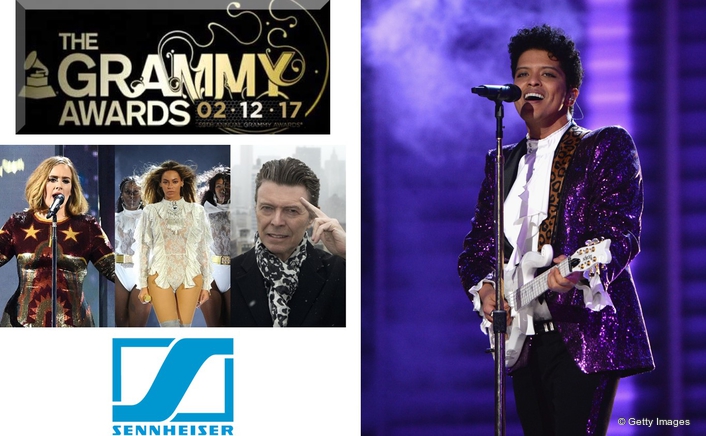 The music industry’s biggest names gathered at the Staples Center in Los Angeles on February 13th for the 59th Annual Grammy Awards. The evening was punctuated by command performances by Bruno Mars, Adele, Beyoncé, and Ed Sheeran, each relying on Sennheiser’s flagship wireless technology: the Digital 9000 system. Others, including Lady Gaga, the Weeknd, and Katy Perry, also turned to Sennheiser wireless equipment for their performances, which were viewed by nearly 25 million television viewers around the world.

Adele opened the show with a performance of her blockbuster hit ‘Hello' on a Sennheiser Digital 9000 system featuring the SKM 9000 transmitter and MD 9235 microphone capsule combination to transmit a powerful vocal performance. Later in the evening, she won multiple Grammy awards for Best Pop Solo Performance, Song of the Year, and Record of the Year for the song — as well as a well-deserved Album of the Year and Best Pop Vocal Album for 25. After collecting the awards, she returned to the stage later for a tribute to the late British pop star George Michael, performing a moving rendition of his song 'Fastlove' accompanied by a montage of images and videos from Michael’s life.

Sennheiser’s Digital 9000 system was also employed by Beyoncé, who performed her songs ‘Love Drought’ and ‘Sandcastle’ through a Sennheiser SKM 9000 and MD 5235 transmitter/capsule combination. Backed by an elaborate dance choreography and arresting visual effects, the Digital 9000 system captured every nuance of what was a flawless performance. Beyoncé would go on to win the Grammy award for Best Urban Contemporary Album for Lemonade. Meantime, Ed Sheeran also sang through the Digital 9000, relying on the same capsule and transmitter combination for his performance of ‘Shape of You’ — which featured him looping his own voice to craft the song’s backing vocals.

Bruno Mars was also among the artists who entrusted his performances to Sennheiser’s Digital 9000 system, taking things a step further by utilizing its fully uncompressed HD audio mode. Mars took the stage twice during the evening: first for a moving tribute to Prince, who passed away in April, during which he sported one of Prince’s signature looks with a ruffled collar and sparkling purple jacket. Joining frequent Prince collaborators The Time, Bruno Mars delivered a memorable rendition of the Prince classic ‘Let’s Go Crazy’ while demonstrating his virtuoso electric guitar technique. He would later return to perform his single ‘That’s What I Like’ from 2016’s 24k Magic album. 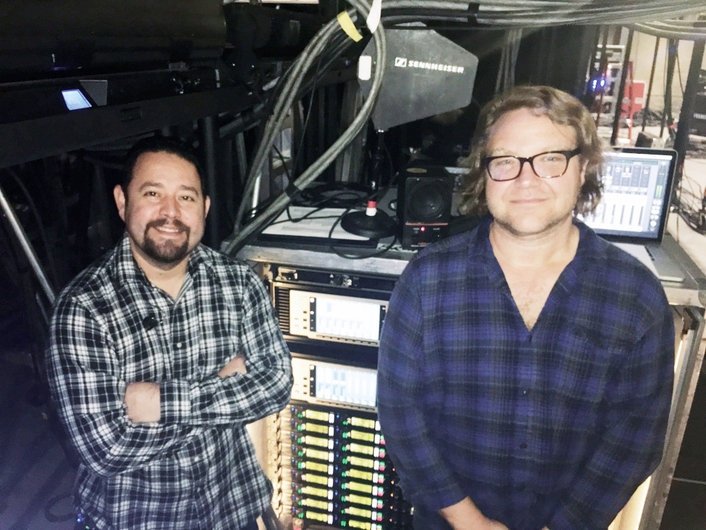 Mars’s front-of-house mixer Chris Rabold and monitor engineer Ramon Morales have been ecstatic with the sound quality and reliability of the Digital 9000. Currently, the pair is in rehearsals for Bruno Mars' upcoming 24K Magic Tour, where the Digital 9000 will serve as the tour’s primary wireless system, making the decision to use it in a broadcast environment for the first time an easy one. “In a situation like the Grammy Awards, you have a very limited amount of time to dial in your settings,” Rabold said. “What’s great about Sennheiser and the Digital 9000 is that your sound is essentially there as soon as you turn the system on.” For Morales, consistency is paramount. “The biggest concern with any wireless technology is always reliability, and Sennheiser has always given us that,” he said. “The Digital 9000 is even more robust than our previous Sennheiser system, and it sounds even better, too.”

Rabold and Morales cite the dynamic nature of Mars’s vocals as their biggest challenge in capturing his performances. “He can vary anywhere from a whisper to a yell, sometimes singing far from the mic, sometimes right on it, and other times cupping it,” Rabold said. “The Digital 9000 helped the team capture every bit of the performance cleanly, whatever the input level.”

Part of the success in preserving these details is due to the power of the SKM 9000 transmitter paired with the MD 9235 capsule. Rabold and Morales chose this combination for Mars’s vocals based on both its performance and pedigree. “We have experimented with many capsules over the years on his voice, but always kept coming back to the MD 5235, which has been his staple for many years,” Rabold explained. “Now the MD 9235 captures everything we love about the sound of the MD 5235 while taking the detail even further, all while maintaining that familiar smoothness that we love.”

“One thing I love about the Digital 9000 is that regardless of how much level you push into those mics, there are no wireless artifacts in the signal,” Rabold said. “Compared to other wireless systems, which often have a certain crunch to them when pushed hard, the Digital 9000 maintains an extremely natural sound at any level. The result is a much smoother top end, which in turn makes the low-mids in the vocal sound thicker.” Switching to the Digital 9000’s HD mode meant no audio data reduction, according to Morales. “Using the HD mode really made a difference,” he said. “It just opens up the microphones in a way that makes it really easy to place them in the in-ear mixes.”

Mars’s lead vocals were not the only audio transmitted by the Digital 9000 during his Grammy performances. All four background vocal mics and the mics for his three horn players were running via the system, which utilized two EM 9046 receivers for a total of 16 channels of transmission. “We used the SKM 9000 transmitters with prototype MD 9245 capsules for our backing vocalists because they feature a slightly tighter pickup pattern,” Rabold explained. SK 9000 bodypack transmitters cleanly delivered the rest of the signals to the receivers.

The Sennheiser EM 3732-II receiver and SKM 5200 transmitter plus MD 5235 capsule combination also made many appearances over the course of the show. First by Lady Gaga, who joined Metallica onstage for a performance of Moth Into Flame; the handheld transmitter / capsule combination was also used by The Weeknd and Katy Perry for their respective performances. A special highlight was when the new Sennheiser AMBEO VR microphone was used on-stage during a star-studded tribute to The Bee Gees featuring Demi Lovato, Tori Kelly, and Andra Day to capture an immersive audio snapshot of the event.

“Each year The Grammy Awards presents an exciting opportunity to see some of the world’s top musical talent gathered together in one place,” said Byron Gaither, Artist Relations, Sennheiser. “It is heartening to see that so many artists and their teams place their faith in Sennheiser technology year after year. We are especially pleased that four of our artists utilized our cutting-edge Digital 9000 wireless system to deliver moving and memorable performances."