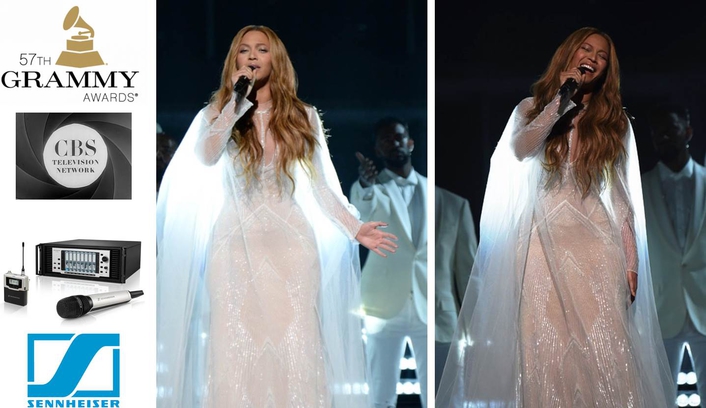 Sam Smith Picks Up Wins in Multiple Categories, Ed Sheeran Does Some ‘Thinking Out Loud’ and Madonna Reclaims The ‘Queen of Pop’
At the 57th Annual GRAMMY Awards held at Los Angeles’ Staples Center earlier this week, audio manufacturer Sennheiser once again delivered ultra-reliable and extraordinarily detailed wireless audio to a host of world-class recording artists including Ed Sheeran, Sam Smith, Beyoncé, Madonna, Tony Bennett, Annie Lennox, Miranda Lambert and many others. Sennheiser user Sam Smith scooped up four GRAMMY Awards, including Record of the Year, Song of the Year, Best New Artist and Best Pop Vocal Album; Ed Sheeran performed a guitar-centric, stripped down version of his blockbuster ‘Thinking Out Loud’, singing through a Sennheiser SKM 2000/MD 9235 combination, and Beyoncé delivered the performance of a lifetime through the Sennheiser Digital 9000 wireless system.

During a ceremony that featured no less than 23 live performances, Beyoncé’s powerful rendition of Thomas A. Dorsey’s ‘Take My Hand, Precious Lord’ — a traditional gospel hymn also sung by Mahalia Jackson at Dr. Martin Luther King Jr.’s funeral in 1968 — was the emotional pinnacle of the evening. Dressed in an angelic white gown and standing reverently amidst a choir of 12 men and a swooning church organ, Beyoncé’s vocal navigated effortlessly through the quiet valleys and explosive passages of the timeless hymn. 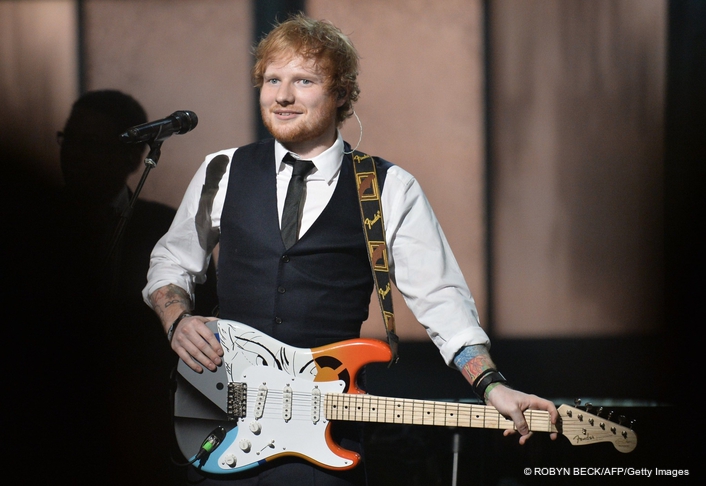 ‘Sacred Music’ and the Sennheiser Digital 9000
The Sennheiser Digital 9000 was successful in capturing every nuance of Beyoncé’s extraordinary range and vocal expression. “For this particular performance, she wanted to go for an old school vibe of singing in a church,” observes Stephen Curtin, Beyoncé’s FOH Engineer. “I had 100 percent confidence in the Digital 9000, since we just used it on Beyoncé and Jay Z’s stadium tour, where it was rock solid. People may not be aware of this, but Beyoncé’s GRAMMY performance was right in front of the P.A. system with SPLs reaching approximately 100 dB. We ran the vocals on top of all this without any issues at all. Having that kind of control is an entirely new experience in itself.” 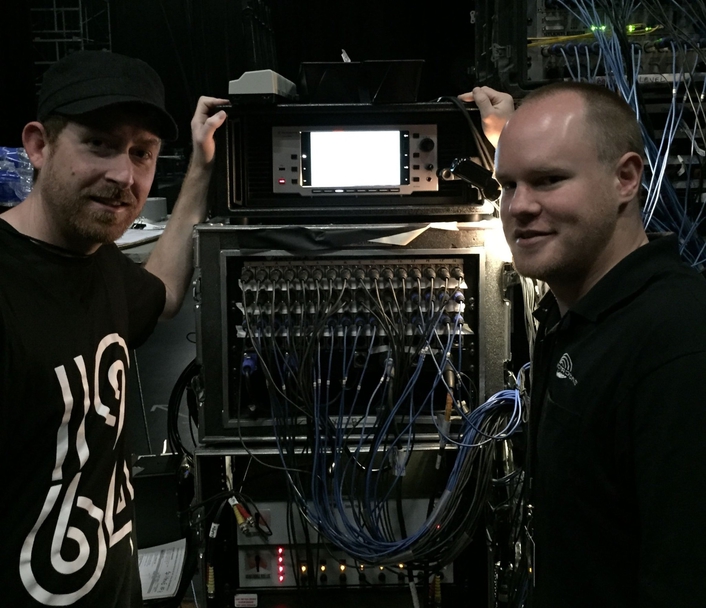 At monitors, James Berry was pleased with the performance of the SKM 9000 transmitter and MD 9235 capsule combination: “The audio was pure and clean, and represented her vocal better than any other microphone out there. With the Digital 9000, you get out exactly what you put in — and this translates to in-ear monitors, the FOH mix and the broadcast world.” At FOH, Curtin appreciates the Digital 9000’s ultra-wide frequency spectrum and its ability to handle Beyoncés powerful, dynamic voice: “Distortion is just something we have never experienced with the SKM 9000, and with the digital HD transmission, you are not losing anything at all.”

Mixing Sam Smith: ‘Nothing Less than Perfection’
The audience was completely transfixed when Mary J. Blige joined Sam Smith on stage for an emotionally charged performance of his instant classic ‘Stay With Me’. Smith crooned through a Sennheiser SKM 2000 handheld transmitter coupled with an MMK 965 capsule, while Blige provided capable accompaniment singing through her Sennheiser SKM 5200 transmitter / Neumann KK 105 S capsule combination.

Simon Thomas, FOH Engineer for Sam Smith, has not been fazed by Smith’s spectacular rise to fame, or his success at the GRAMMYs. “I always had this feeling that Sam would go all the way, ever since I mixed his first American show in July of 2013,” he says. Thomas was extremely careful when selecting the right capsule for Smith’s voice, which has extraordinary range and power. “I chose the Sennheiser 965 capsule for its extremely smooth response. Also I needed a microphone that was going to be very sensitive in the quiet moments, yet could also take a good old spanking when we pushed it.” 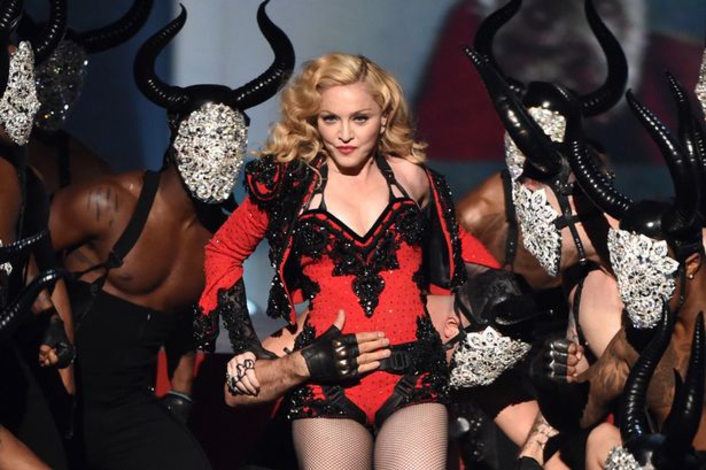 Madonna at the 57th Grammy Awards

In terms of reliability and RF performance, Thomas expects nothing less than perfection: “I have no tolerance for RF interference, since my attention has to be on mixing the show,” he says. “To be honest, I have been using Sennheiser transmitters and receivers for over a year and a half now and I can’t remember ever having a single RF issue.”

Over the course of the evening, hosts and presenters such as Smokey Robinson, Miley Cyrus, LL Cool J and others used Sennheiser SKM 5200 handheld transmitters both on and off stage, coupled with with Neumann KK 105 S capsules.

Sennheiser: Supporting the Home Team
In addition to having its products represented in the vast majority of GRAMMY performances, Sennheiser was also on the ground to support the event’s enclave of FOH engineers, monitor engineers, broadcast professionals and RF technicians. “We wanted to use the Digital 9000 for the Grammys, but the sound vendor that we normally source it from had it out on another project,” recalls Stephen Curtin. “We called up Sennheiser and asked if they could send a unit out, and before we knew it we had one on the ground with a complete microphone package. To be able to get a wireless system of that caliber so quickly was a great example of the support we received.” 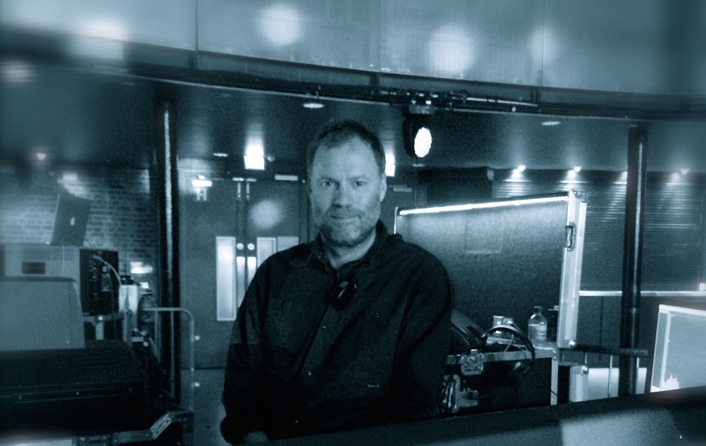 The Sennheiser Group based in Wedemark near Hanover, Germany, was founded in 1945 and has gone on to become a leading manufacturer of microphones, headphones and wireless transmission systems. Sales in 2013 totaled 590.4 million euros. Sennheiser employs more than 2,700 staff worldwide and operates plants in Germany, Ireland and the USA. The company has a worldwide network of subsidiaries in France, Great Britain, Belgium, the Netherlands, Switzerland and Liechtenstein, Germany, Denmark (Nordic), Russia, Hongkong, India, Singapore, Japan, China, Australia and New Zealand, Canada, Mexico, and the USA. It also has long-established trading partners in other countries. Georg Neumann GmbH, Berlin, a maker of studio microphones and monitor speakers, and Sennheiser Communications A/S, a joint venture making headsets for PCs, offices and call centers, are also part of the Sennheiser Group.