Robe Finds a voice in Ukraine 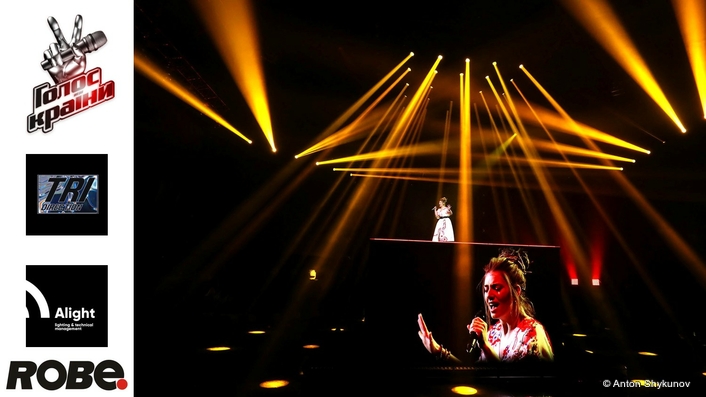 The coronavirus pandemic didn’t dampen anyone’s enthusiasm for the 2020 final of singing competition The Voice Ukraine, which was broadcast live from the Kyiv studios of TV channel 1+1, produced by Volodymyr Zavaduyk, directed by Tri.Direction and lit by Eugene Kostyra, also working closely with DoP Sergey Petrov. To create an original and spectacular lighting design for this socially distanced television event, Eugene utilised Robe MegaPointes and Spikies as a key part of his lighting rig which were supplied, along with all the other lighting equipment, by Ukraine’s largest rental & production company, Alight.

It was the tenth season for the popular show and Eugene has been involved with the lighting since the fifth series (as well as two series of the ‘Junior’ edition).

His usual action-packed schedule sees him working full-time as a designer and also designing, programming and operating shows for clients as a freelancer, where he is in demand for his flair, imagination and reputation for thinking laterally about the application of his creativity. 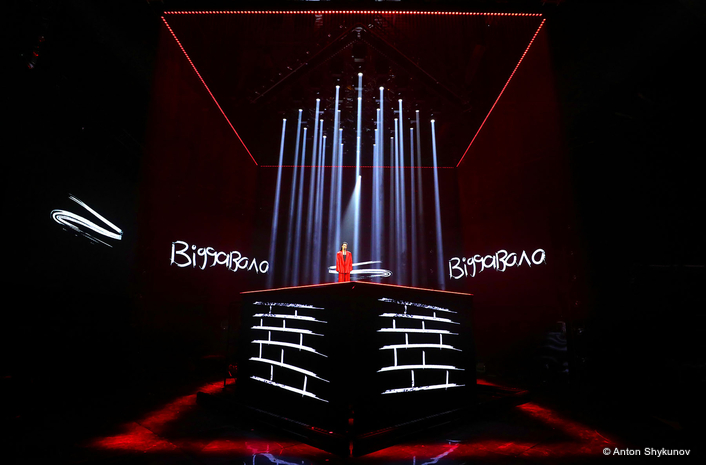 Tri.Direction – directors creative team of the show developed the set design which was based around clean lines and start geometry, with a large 3-metre-high central riser with LED screens around the base, complemented with more screens upstage in a curve around the back and sides of the studio space.

Eugene took this as inspiration and filled the areas with light following the same clean and well-defined precision, accentuating the cube shape and the relationship between the different screen areas. By varying the screen content, the whole mood of the set could be shifted dramatically for each participant. 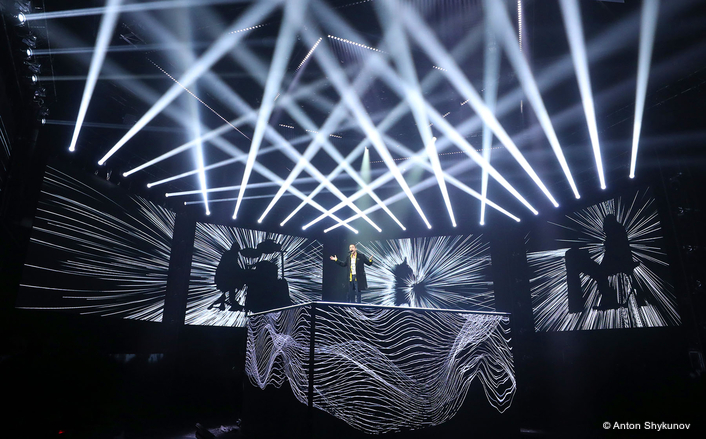 Originally the set had been designed for a classic Voice finale set up including a substantial live audience, however, as Ukraine – like most of the rest of the world – was in lockdown, they decided to go ahead without the audience. The set was reworked to take this into account and to enable the production contestants, technical crew and all other personnel working on the production to observe the social distancing rules.

Twenty competitors split into four teams each mentored by one of the four coaches. Some of the finalists were citizens of other countries who could not be there this year for quarantine reasons … so these appeared via live video translation.

Eugene used 42 x Robe Spikies rigged on vertical truss in between the rear LED screens for creating intense and highly accurate beam effects. He thinks these little fixtures are “perfect for this style and format of TV show, and I use them frequently in this context”.

He thinks the Spikie always work well when pointed into the camera and loves the speed of the fixture, together with the dimming and the Flower effect, which he describes as “beautiful”.

The 25 x MegaPointes on the plot were located on the overhead rig along with several 5x5 LED panel luminaires. 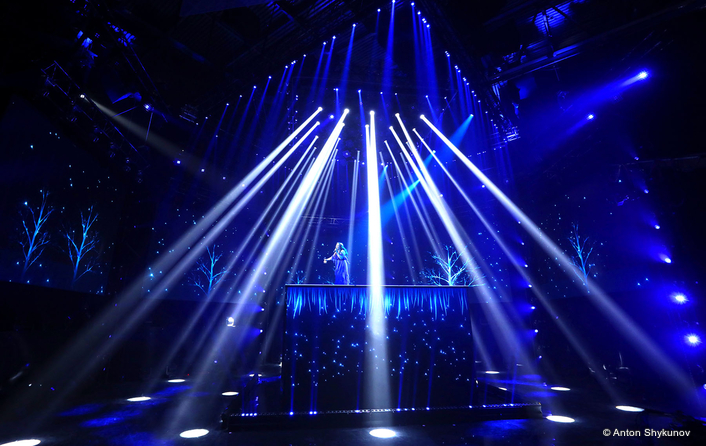 MegaPointes are another favourite of Eugene’s – he has spec’d them constantly on virtually every project since Alight first invested in 2017, “they look fantastic from all camera angles,” he stated.

“MegaPointes and Spikies bring diversity and many creative options to a show like The Voice which involves expressing styles and moods from so many different genres of music. I needed as many tools at my fingertips as possible to be able to match the vibe of each song and to instantly enhance the drama and ambience as demanded by the director.”

In addition to these Robes, various other fixtures were in the rig including other beam lights, moving and static LED battens.

Eugene programmed and ran all the lighting for the finale on a grandMA3 console.

Everyone was impressed with the results. “We created a unique and special show, and the lighting design was flexible and functional whilst also conveying an atmosphere of self-isolation.”

Being in the middle of a pandemic working in ‘live’ TV did require some adaptations in the prep and the execution of the show.

All the advancing, including working with the different competitor teams, was conducted via Zoom and other video conferencing platforms.

During rehearsals, everyone's temperatures were measured at the studio entrance and everyone wore protective PPE including masks and gloves.

There were restrictions on the number of people allowed on the studio floor at any one time, so the technical service crews worked in shifts whilst changing over and preparing each scene. 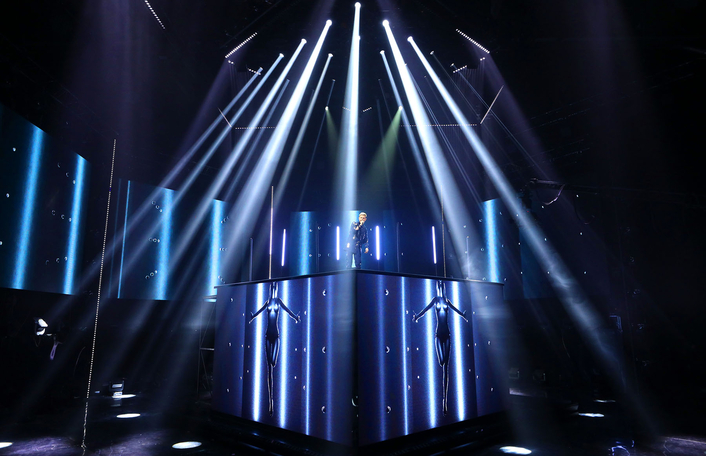 During the broadcast sections, there was no one on stage except the vocalist! Hosts Kateryna Osadcha and Yurii Horbunov appeared via holographic projection, and the training and coaching sessions shown on the screens were also all done online!

The main instrumentation / backing for each song was pre-recorded by that project's musicians / band before the broadcast, and the entire film crew and other technical staff were physically separated, connected with studio comms run over frequently sanitised two-way radio systems.

None of this visually affected how the finished product appeared on TV screens, all of which looked exciting and emotive for viewers.

Music is generally Eugene’s biggest inspiration when creating a lightshow, and this – together with the director’s vision – was a major driver on this show, where he was additionally tasked with influencing the drama of each performance with lighting.

As this specific Voice finale had new and unique parameters, these also encouraged him to “look in new directions with new vision” and a more out-of-the-box and bold approach.

Eugene has been a lighting professional for 10 years, and before that, he was involved in gigs, shows, and events as part-time jobs, working freelance for rental companies while completing his studies. During these early experiences, he first encountered Robe products, which were ColorSpot and ColorWash 575 fixtures. 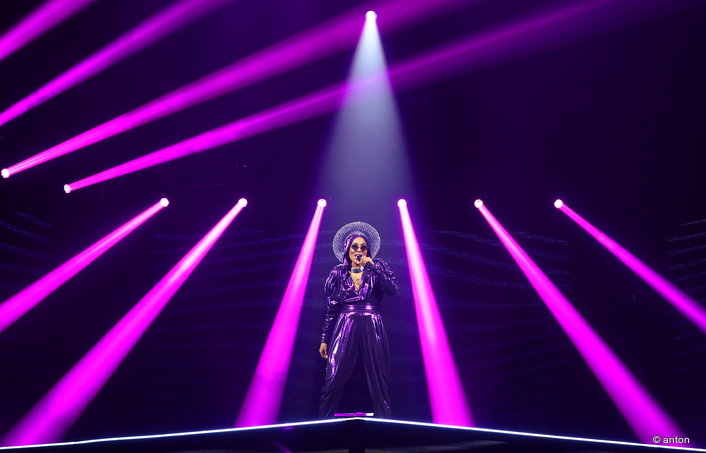