Italian superstar Vasco Rossi is currently engaged in his summer Live Kom 15 stadium tour which is completely sold out, and will see the legendary singer play to nearly 1 million fans, with another stunning lighting and show design by his long term LD, Giovanni Pinna.

This year Giovanni has incorporated 34 Robe BMFL Blades and 16 BMFL Spots into the design, which are the work-horse spot fixtures of the tour. He has also deployed 100 of Robe’s LEDBeam 100s which are dotted around the back wall of the main set. One of Italy’s leading designers, he has been using Robe products in his work for some years, but this is the first full-on project for which he has specified BMFL Spots. 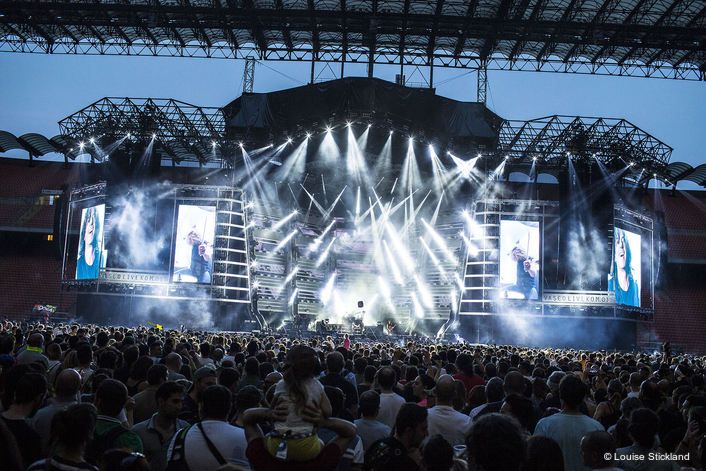 Giovanni worked closely with Claudio Santucci and Florian Boje from set design company Gioforma who produced the imposing industrial stage set constructed from aluminium and fabricated by Rome based rental company BOTW, who are also the tour’s lighting supplier. Giovanni ensured that the set was designed so that his lighting fixtures could be fitted into and around it.

As usual, the stage presentation contains a lot of video. The set has a 68 metre span widthways and is built around a Space Roof giving 22 metres of clearance from the stage to the roof. Behind the central set centrepiece is over 200 square metres of Pixled F-37 LED surface, and eight lighting pods in the ceiling – moved on a Cyberhoist system – are also bordered with the same LED surface. 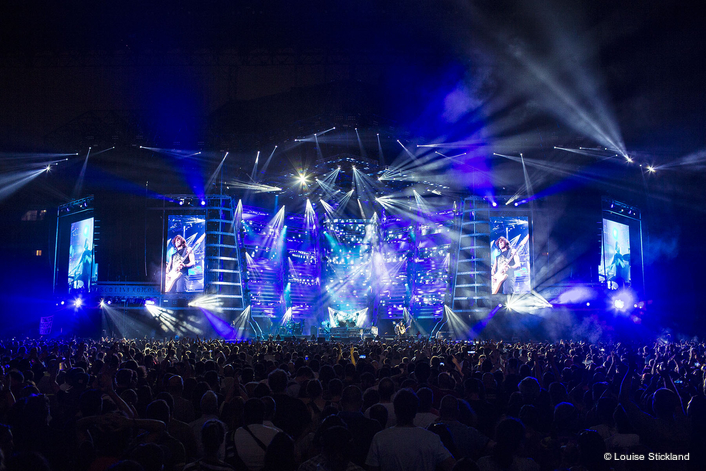 There are four large portrait IMAG video screens (two stage left and two stage right) in the stage wings made up of Compass 8 mm LED which are angled to offer good viewing to all watching the show from the sides of the stadiums, so they can also receive the full Vasco Rossi experience.

Having attended the very first ‘soft’ launch of the then new BMFL Spot last year at the 2014 Glasgow Commonwealth Games, Giovanni reveals that BMFL Spots were “Number one on my wish list for this tour”. He wanted them for their extreme power and brightness and incredible range of effects. 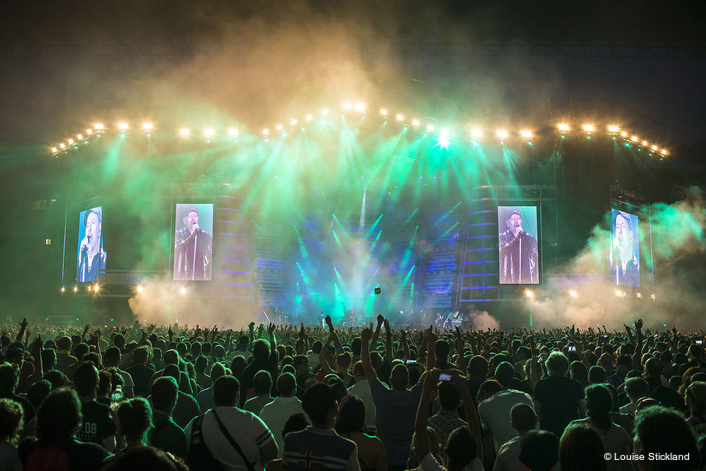 They were positioned all over the set. Eighteen were on the back wall of the centre section of the set. Sixteen were on the moving pods and another 16 were spaced out on the wings stage right and stage left – all nicely spread for maximum coverage and impact and lots of ‘power’ looks.

The BMFL Spots were used extensively throughout the show, contributing to all the major stage and band looks as well as for illuminating the audience.

“It’s the first time – and finally – that I have actually been able to light a stadium audience with lights from the rig and see the effects – even in darker colours and with gobos inserted!” he declares. Using BMFL Spots he’s been able to achieve this effect without having to spend budget on a load of additional fixtures just to light the crowds. 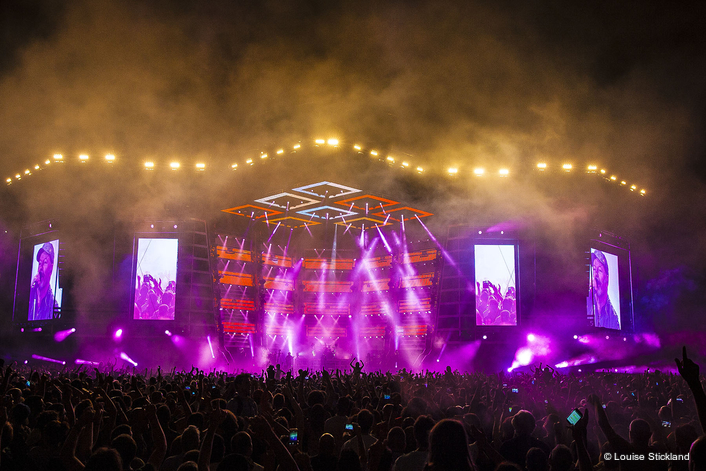 Rossi is a great communicator and well known for having an amazing rapport with his fans, so lighting the audience is a huge part of the show.

The first hour of the epic 2.5 hour performance is in daylight, so Giovanni is also appreciating the fact that – out of all the fixtures on the rig – the BMFLs are the ones that also stand out in the daylight.

“They make a huge different all round, but particularly during the daylight section of the set,” he commented. All the fixtures are run in white for this section.

The stage is only partially covered, so some of the BMFL units have been exposed to the weather in what’s been an unusually wet summer so far in Italy, but they have continued working. (Along with the other exposed fixtures, they are covered by custom weatherisation material from BOTW.)

The LEDBeam 100s – which Giovanni loves – are dotted all over the centre section of the set wall and their piercing little beams are used for eye-catching matrix effects from the third section of the show onwards. “I love these little fixtures,” says Giovanni, “They can be fitted almost anywhere and are fantastic beam effects”. 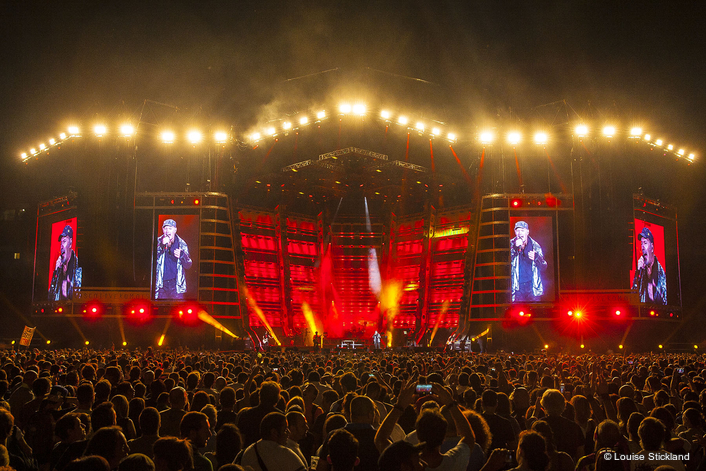 Giovanni operates all the Robe units and other lights from a grandMA console and a grandMA light is used by Marco Piva to run the media servers playing back the scenic video elements.

The performance is divided into four sections. The first gets everyone in the mood with a selection of stomping anthems from Rossi’s extensive back catalogue of 26 best-selling albums and numerous hits. The pace then slows down for an acoustic section, for which the pods descend from the ceiling, closing down the space … before entering the third section, a full rock-out with all-visuals-blazing and massive finale guaranteed to send the audiences away with burning retinas and a great dose of Rossimania! This is followed by more of the same for a 4-number encore.

The show has all the accoutrements of superlative stadium rock with the high-energy lighting design at the centre of the action, plus a great combination of scenic and IMAG video, a large laser system from ER and a serious battery of large CO2 effects and a great sound system supplied by Audio Rent.

These all provide the appropriate production values and excitement for Rossi – one of the last classic showman performers - to bring his magic right to the heart of his adoring fans.