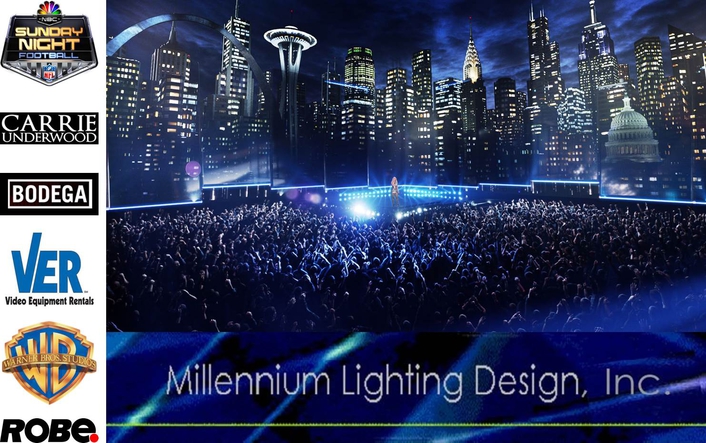 NBC's 2015 “Sunday Night Football” Open with Carrie Underwood features 34 x Robe BMFL Spots which were specified by Los Angeles based LD Benoit Richard from Millennium Lighting Design, Inc. who was charged with creating all the theatrical and effects lighting for the shoot.

The high energy 2015 SNF Open features another new and rousing rendition of “Waiting All Day for Sunday Night” sung by Underwood. The shoot location changed this year as the production team took over one of the large sound stages at Warner Brothers Studios in L.A.

The creative concept revolves around showing numerous behind-the-scenes situations including player interactions with Carrie … and even a cameo of Benoit weaving his magic at the lighting controls. The build-up leads to Carrie’s exciting performance in front of thousands of cheering fans.

After the great experience of using Robe fixtures last year, Benoit again wanted to use innovative lighting and visual technologies for the two day shoot, and chose BMFLs as part of this.

The basic idea for the lighting scheme was that the BMFLs and other principal theatrical lighting fixtures – would come together in a much larger virtual environment to produce a high-impact opening for each week's prime time national football game.

The main performance stage for the shoot was arranged in a diamond shape where 14 BMFLs were rigged in the air and 9 more were placed on the floor.

At the opposite corner of the sound stage a second set-up featured 13 vertical 6mm LED “pillars”, each measuring 11ft tall by 2ft wide. These converging video panels had another seven BMFLs rigged above. 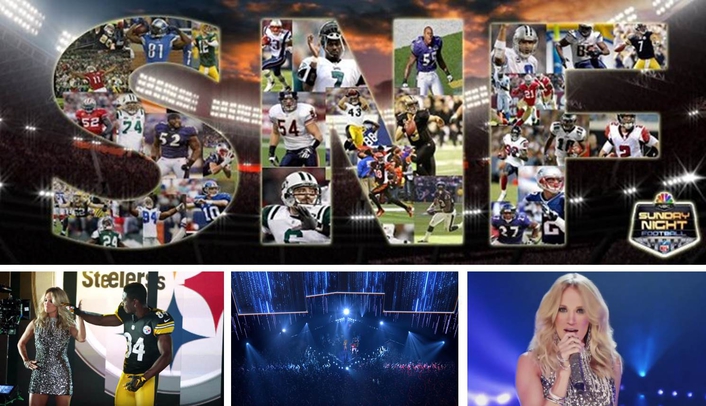 In the third corner, a green screen area was established to capture the various NFL players in action. The remaining areas were used for interviews and for some of the behind the scenes shots.

In addition to the aforementioned BMFLs, Benoit used four more units as key and back follow spots. The physical layout of the sets in the sound stage made this a practical as well as a good aesthetic choice.

“It was extremely easy to quickly balance the color temperature between the back and front lights, tweak the green levels, add diffusion, etc... And Carrie looked beautiful when lit from the BMFLs,” he commented.

Benoit had wanted something with real power, punch and presence, this was actually his first time using BMFLs … and he was extremely impressed.

“I love the giant aperture of this fixture and the big fat beam that comes out – it has a signature look that really rocks!” he declared, adding that he also enjoyed zooming right out and using those sinewy wide break-up looks that only a BMFL can produce.

“The name BMFL says it all,” elucidated Benoit, “It’s a unique fixture because it is very bright … and exceptionally multi-functional!”

In the immense virtual environment created for the 2015 SNF Open, the BMFLs contributed hugely to the vibrant rave party feel as intended.

Benoit programmed and operated the lighting fixtures and a Hippotizer Media Server from the Road Hog Full Boar 4 console. The theatrical rigging gaffer was Walton Rowell, working alongside a great crew from IATSE local 728.

NBC Sports’ Executive Producer was Fred Gaudelli and the Head of Production from Bodega Studios was Michael Flexner.

The intro was directed by NBC Sports’ Tripp Dixon; the Creative Director was Haley Geffen from Bodega Studios and the Director of photography Chuck Ozeas from IATSE Local 600. Production Designer was Evan Rohde and the Art Director Gill Gayle (both IATSE Local 800); Gaffer Chris Conway (IATSE Local 728) and Key Grip David Richardson (IATSE Local 80) were all integral to a great collaboration, and the whole project was co-ordinated by Producer Rayna Saslove for Bodega Studios.

All the theatrical lighting fixtures, LED Panels and the media server were supplied via Fred Waldman at VER’s Burbank facility, with Warner Brothers providing the film shoot lighting kit.