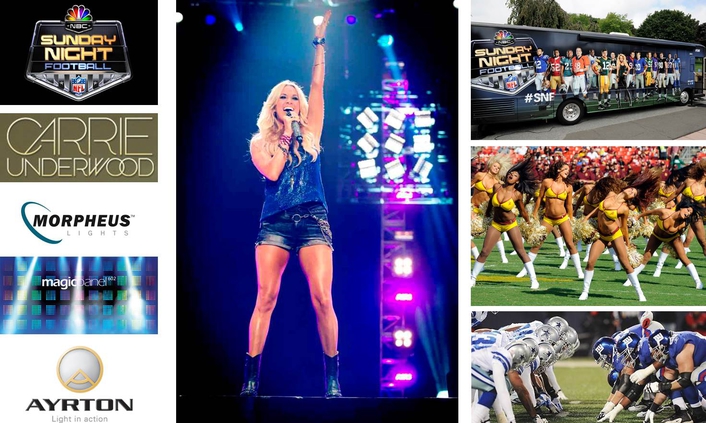 .
Lighting Designer, Benoit Richard, can lay claim to the first use of Ayrton’s new MagicPanel™602 fixtures in the USA with his lighting for Carrie Underwood as she performed ‘Waiting All Day for Sunday Night’, the opening theme song for NBC’s weekly coverage of NFL Sunday Night Football.

Richard used thirty-six MagicPanel™602 fixtures when the opening sequence for the National Football League’s weekly prime time show was filmed. Previous years have seen Pink and Faith Hill sing the opening night theme songs, but this year the torch was passed over to former American Idol winner, Carrie Underwood, who made her debut during the first week of the NFL season on September 8th, 2013.

Richard was determined to create something impressive to mark Underwood’s debut. “With a new Artist singing the theme song for this year's ‘Sunday Night Football’ Season, I envisioned that we needed to showcase a brand new lighting product that had never been shown on TV before,” he says. “Keith Bennett from Morpheus Lights had sent me promo videos from the German trade show just a few weeks before I got the job. Talk about good timing! I was very impressed with what I saw and we worked together with Ayrton to make sure our production would be the first in North America to use the MagicPanel units. We pulled it off!”

Underwood's live performance was shot at Raleigh Playa Vista Studios near Los Angeles International Airport at the end of June. Richard worked closely with Director of Photography, Chuck Ozeas, and Production Designer, Evan Rhode, to achieve a ‘live performance’ look in what was essentially ‘an incredible feat of visual effects’, according to Richard. All other elements in the video - the Stadium, most of the audience, all the video elements, pyro and lasers – were added in post-production.

Richard used the 36 MagicPanel™ fixtures in four 3 x 3 arrays which he housed in four moving ‘pods’ to resembled authentic Stadium Sports Lights. “The goal was to have a unique and new look where the viewers would wonder, ‘What are those lights behind Carrie?’” says Richard, “and I think we achieved that really well. The tricky part was to make sure that the MagicPanel units would not ‘upstage’ the Artist because these fixtures have a tremendous output.”

With only two days to set up and program the large concert lighting rig, time was a critical factor, but the MagicPanel™ fixtures’ programmability proved very valuable. “I decided to set up the fixtures in ‘extended mode’, which meant using 160 channels per MagicPanel and a total of twelve universes of DMX!” says Richard.  “To give me full flexibility I programmed several Group ‘matrixes’ with the Road Hog Full Boar's Effect Engine and, by using the ‘COPY’ feature on the console, I was able to create dynamic and fluid looks very quickly. 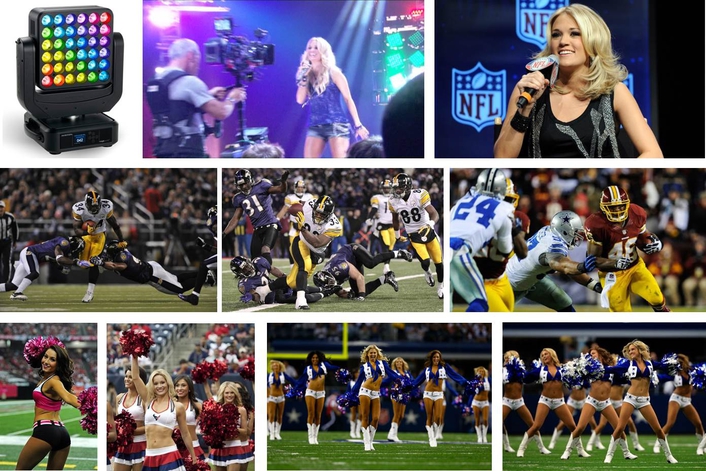 “My initial reaction to the MagicPanel was simply ‘Wow!’. That's all I could say for a while... It's the most exciting product that I have seen in the last 20 years. Is it a moving light? Is it a video screen? It’s both! The possibilities are endless and that's what makes this product unique. Our 36 MagicPanel units performed flawlessly during the build and on the shooting day, so it’s very solid manufacturing.

“I'm sure a band will be on tour very soon with a back wall or a ceiling full of MagicPanel fixtures. That would be very exciting to design and program!”

Ayrton’s MagicPanel™602 units were supplied by Morpheus Lights, Ayrton’s exclusive US distributor. “Morpheus did a great job,” says Richard. “Mark Fetto provided the equipment for my entire lighting design and he put together a great crew with Jay LeDane at the helm.”

Ayrton MagicPanel™602, which has just been awarded the LDI Award for Best Debuting Product in the Projection category, is a moving head LED beam projector equipped with thirty-six 15W Osram RGBW emitters in a 6 x 6 array.  Each emitter projects a tight, powerful 7.5° beam and can be controlled individually or used collectively to produce a coherent 12,000 lumen shaft of light.  Under individual control, the emitters can be pixel mapped or driven by video via Art-Net or Kling-Net. To supplement the graphic possibilities this control provides, MagicPanel™602 can be continuously rotated on both pan and tilt axes, which adds a dynamic dimensional effect to beams individually projected by mapped emitters.  MagicPanel is obviously also controllable via DMX-512 and is RDM compatible.