Robe BMFLs are a Key to Eurovision 2016 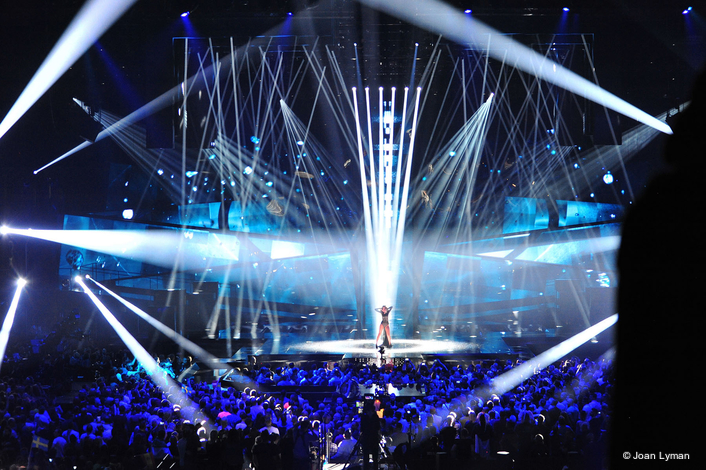 Nearly 100 Robe BMFLs – 88 x BMFL Blades and 6 x BMFL Spots – proved invaluable to Fredrik Jonsson’s lighting design for the 2016 Eurovision Song Contest which was staged in the Globe Arena, Stockholm with a capacity live audience of around 10,000 plus an estimated 180 million television viewers worldwide.

Nothing like a bit of pressure ... which Fredrik took in his stride, lighting his second ESC in three years, having also been LD for the 2013 edition in Malmo. He was also the lighting operator for the last ESC staged at the Globe Arena ... in 2000.

Significantly, the BMFLs were an essential tool for lighting the show properly. “I needed a high intensity spot with good colour rendering and a framing shutter system that enabled proper key-light from long throws,” explained Fredrik. “The BFML Blade fit that specification to the mark, hence their presence on the rig”.

Fredrik’s stunning production lighting design was crafted together with set designers Viktor Brattstrom and Frida Arvidsson and Mikki Kunttu who designed and ran all the playback video content as the initial 42 entrants batted it out to be among the 26 finalists.

The event once again took production, presentation and visual imagination to new heights of style, ambition and excellence under the Technical Direction of Ola Melzig.

When it came to key lighting, Fredrik knew that due to the height and dimensions of the Globe – the largest spherical venue in the world - he needed a fixture that was super-bright and also that could be precisely shuttered.

The bleacher seating areas around the arena are all very steep so he needed to go high with his key-light fixtures to preserve the site-lines.

With a massive amount of video elements integrated into the stage and set (900 square metres) he needed the brightest fixture possible … and Robe’s BMFL was the only fixture that can currently deliver brightness and power fully for both criteria in the quantities and accuracy required.

The BMFL Blades were positioned to give two levels of key-light - the first row of trussing was immediately in front of the stage and very steep. A bit further back (into the arena), the  second row of units was rigged further into the auditorium and also doubled as back and key-light for the extensive green room area.

These were throwing around 18 metres down into the Green Room, a major part of the live action as the tension mounted on the final night, with cameras constantly flipping between the 26 delegations nervously waiting in there and the performances onstage at the other end of the Globe.

The BMFL Blades were also positioned on three side ladders stage left and stage right which were on motors and moved up and down throughout the show – throwing approximately 16 metres to the stage. These were invaluable for getting side light onto stage for artists, dancers and the various props used in the different performances. The beams could be tightly shuttered to avoid spilling onto some of the upstage projection screens when they were in use for certain songs.

“The BMFLs were really worked hard throughout the entire event in a multi-purpose context,” says Fredrik.

The six BMFL Spots worked perfectly as rear follow spots with the handles added to the bodies, and all functions apart from pan / tilt were run via one of the lighting consoles.

“They are SO powerful” he says, “They can be a big punchy beam light one minute and a potent soft-light the next, and the CTO and colour system are also excellent.”

Fredrik was assisted by associate LD Emma Landare who also ran lighting for the opening sequence and interval acts which included a rousing performance by Justin Timberlake. They worked alongside four lighting operators Calle Brattberg, Danne Persson, Fredrik Stormby and Timo Kauristo. The BMFLs were supplied to the production by Danish lighting rental company Litecom.

Fredrik, from Eyebrow Designs, is a freelance LD based in Stockholm who works primarily on live TV productions and also in theatre, live music and other disciplines and he will definitely be using BMFLs again the next time he has the opportunity.