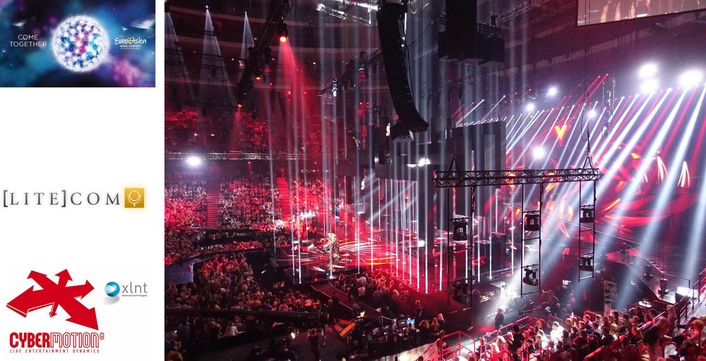 Technical director Ola Melzig, who is nothing short of a Eurovision expert with extensive experience managing the event since 2000, specified the CyberHoist II system from ESC 2016 official technical supplier [LITE]COM.

[LITE]COM, which invested in 32 units and four MotionCue3D control systems prior to the event, supplied a 88-hoist system, supported by Ampco Flashlight Rental.

"Once the set design was established back in September it was quite obvious that it required a significant automated element for both staging and lighting," explains Melzig. "CyberMotion was about to release the second generation of CyberHoist whilst looking for the ideal large-scale platform to debut it. I jumped at the chance as we were the first ever show to use the system back on Eurovision 2003 so it closed the circle nicely."

The hoists were required to automate the main elements of the show including the ten ARCS above the stage, six 'flowerpot' lighting trusses which moved from underneath the stage upwards, 12 back lighting pods which comprised TourPro AquaBeam and Clay Paky Sharpy fixtures, two LX-trusses, two pyro trusses, two trusses with Holo-Gauze projection screens plus two trusses for the 2 x 3 backlight followspots.

"The updated CyberHoist II system is really amazing," continues Melzig. "Its advanced cues allow you to program quickly and easily. But the most interesting thing was the way we implemented it to control each automated lighting object as well as the set pieces. The fact it was all on one system saved a lot of time and money which was fantastic."

The entire lighting rig comprised an immense 1,700 fixtures, however CyberHoist II has been specifically designed to manage and accommodate the rigours of automation design for such large-scale entertainment environments.

"CyberHoist II is ideal for this show as it's extremely safe, very reliable and fast to program," explains Swagemakers. "It allows us to efficiently make any adjustments the lighting designer requires. It is also a very safe system - with redundancy in almost every aspect of the system."

"CyberHoist II has been fundamentally designed to respond to the needs of motion control requirements in live production," Swagemakers continues. "It is object-based, meaning we can simply select an object, use the Object Control function to move it to a certain position and record it on the MotionCue3D desk. The speed of programming on this system has even surprised the lighting designer of Eurovision and his programmers.

"One other impressive feature is the option to use two precise settings for deceleration and acceleration - Smooth and Linear. In Smooth the motion is seamless with no hard stops in between or at the end of a movement. You can actually move a circle like a rolling coin - it looks completely flawless. The Linear setting is then ideal for fast movements."

The Eurovision Song Contest 2016 took place on Saturday 14 of May. Jamala with her song '1944' saw the Ukraine scoop the victory, with Australia and Russia in second and third place