On the road with Nashville in Concert 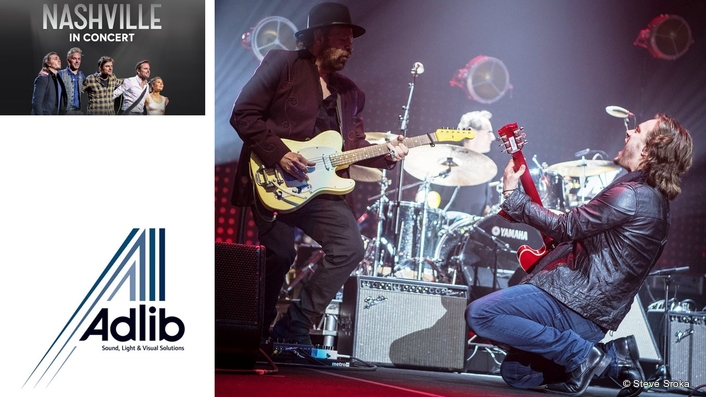 Jonathan Jackson during the live show

Adlib helped bring all the drama, excitement and glamour of the massively popular CMT TV series Nashville to the stage as ‘Nashville in Concert’ returned to the UK for a second run of sold out arena shows following the success of last year’s tour. The Liverpool based production specialist was asked to provide full production – lighting, audio and video - after making a great impression in 2017 on the production crew from Grand Ole Opry in Nashville, Tennessee.

Adlib this year provided the key disciplines of lighting and sound plus the IMAG video package. Having one production supplier simplified logistics & administration, and enabled Adlib to offer both excellent continuity of service and a cost efficient deal.

The format was as before, a fabulously tight house band supporting a selection of cast from the series including Jonathan Jackson, Chris Carmack, Clare Bowen, Charles Esten and Sam Palladio. They played a vibrant set of new and favourite songs from the latest series together with their own original material and, as always, a few surprises! 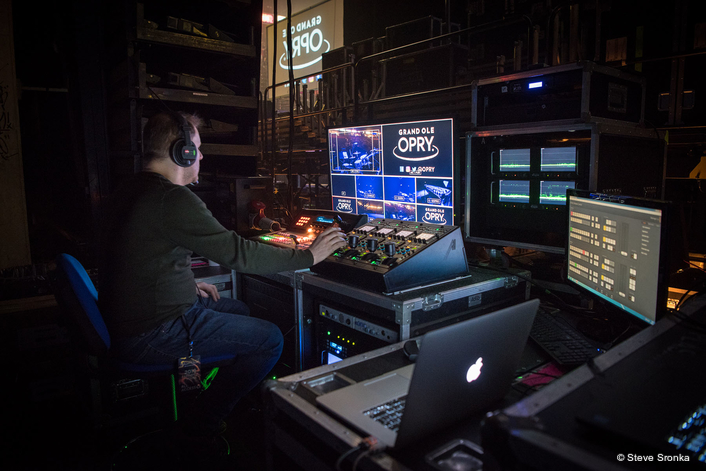 Adlib’s Dave Eldridge co-ordinated all the lighting and video elements. This year, Adlib was also asked to create a production lighting design after receiving a brief from the production team led by Betsega and Mike.

They wanted something that was fresh and different from last year, but that also related to the overall Nashville concept, so Dave and Adlib LD Tom Webber, who programed lights and operated the show on the road – used the striking “Nashville in Concert” backdrop as a starting point.

Dave and Tom were keen to combine a theatrical feel with a sense of spectacle as well as a touch of television.

The fixed backline in place each night offered a great opportunity to use the spare floor space in and around it for lighting fixtures, which added depth and dimension to the performance space.

The structural aesthetics were based on three straight trusses overhead and a classic combination of spot and wash moving lights, for which Martin MAC Viper Washes and Profiles were selected, with 18 and 21 respectively of each type on the flown rig.

On the floor were six more Viper Profiles on raised podiums to elevate them slightly above the backline for impact and to blast through for eye-catching silhouette effects. These were joined by eight MAC Quantum LED washes on the deck dotted in between the backline kit.

Eight Robe picklePATTs on stands were positioned behind the Viper Profiles on the podiums adding a dynamic aspect to the overall look which also tied in well with the backdrop, bringing a nice tungsten-style effect to the stage. A splash of retro in a contemporary setting as well as looking fantastic in the ‘back-of-camera’ shots. 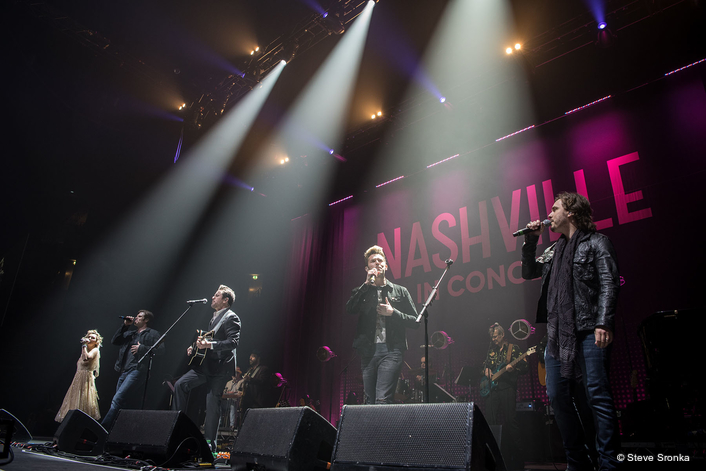 With such a diverse range of songs and atmospheres to be created, ranging from bouncy up-tempo pop numbers to soulful blues to delicate ballads, they “really needed a full and flexible range of attractive static looks plus all those huge hi-impact beamy effects that really animate the stage,” explained Dave.

The backdrop itself was up and down-lit with a total of 18 x Chauvet COLORado Batten 72s which gave it definition overlooking the whole stage.

Tom chose a GrandMA2 light console on which to programme and run lighting.

The IMAG video package comprised four Sony HXC-100 cameras, two positioned at FOH for the long and overall stage shots, and one hand-held onstage to capture the action close up. The fourth was a static non-operated camera onstage, deployed behind the piano and used for contrasting cutaways.

The camera feeds were sent to one of Adlib’s Blackmagic 2ME vision mixers being operated by Iain Christie. He cut the mix and sent it to the two 20 x 11 ft. 3 inch Stumpfl side screens, each of which received images from a pair of double stacked Panasonic PT-DZ21K 20,000 lumen machines.

The results were really eye-catching, and the styling of the show received lots of positive feedback.

Adlib’s crew chief Kevin Byatt tied all the production elements together, taking an overview of the lighting and video systems. Charlie Rushton, Ash Dawson, Mark Taylor & Rob Bickerstaff were all the Lighting / Video Technicians for the tour.

Dave Eldridge said, “It has been great to be involved in both the lighting and video elements as our team has had the opportunity to offer a cohesive result’’. 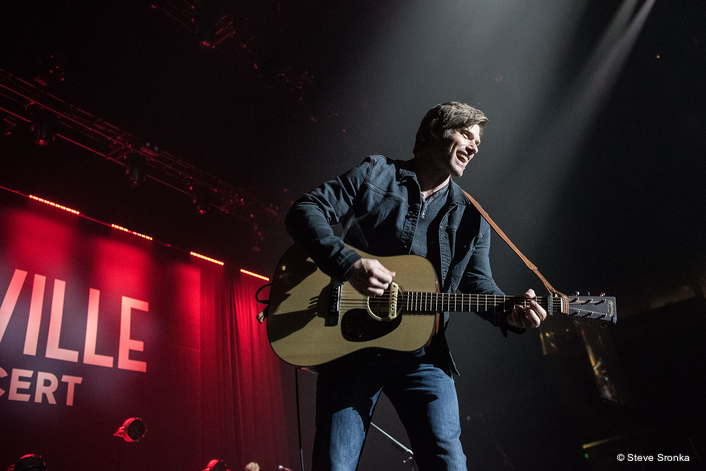 Chris Carmack during the live show

Following the great success of last year’s sound, Adlib again supplied an L-Acoustics system, which in a typical format comprised 16 x K2 loudspeakers with 15 x KARA for the side hangs, supplied with all necessary rigging.

These were complimented by 16 x ground stacked KS28 subs, eight a side running in cardioid mode, plus some KARA and ARCS for infill and lip-fills.

George Puttock was the Adlib systems engineer, working alongside Hassane Es Siahi and Mike Thorpe, and together they looked after Nashville’s own engineers Jayme Braun (FOH) and Josh White (monitors) and ensured that all of their sonic requirements were met. 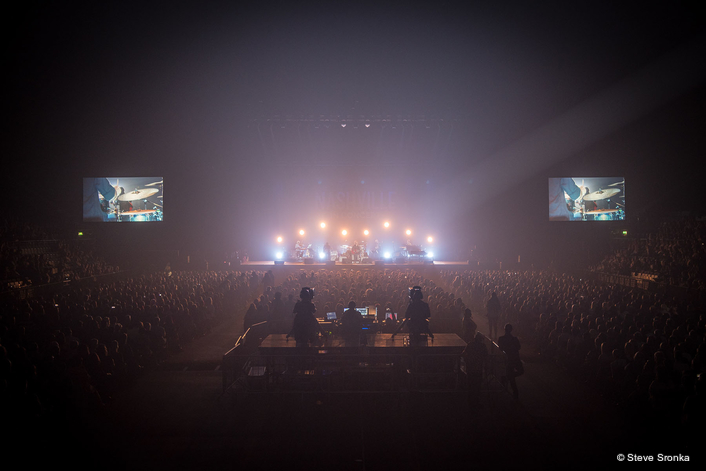 For the six musicians in the band, the five backing vocalists and the cast / soloists, they used a mix of Shure PSM1000 IEMs and 10 x D&B M2 wedges for monitors. Adlib also supplied a full complement of mics.

The Nashville engineers both specified Avid Venue consoles, and George ran the whole system via AES with full redundancy.

Hassane commented that Josh was “an amazing engineer with great communication skills” and that he really enjoyed the experience of working with him and the rest of their team, “They are very talented and also very down-to-earth considering they work for some of the biggest country stars in the world! Fabulous people to work, spend time and do business with”. 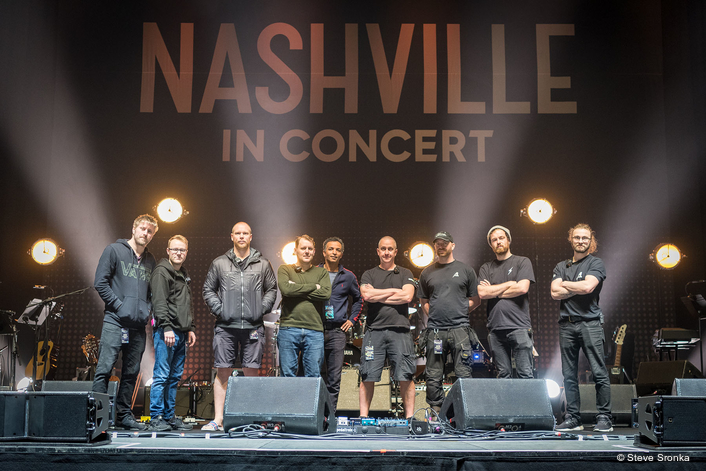 Phil Kielty Client Manager stated, “Having Betsega Bekele back again overseeing the tour and Mike Sponarski as production manager, meant we could almost carry on from where we left off last time. The atmosphere behind the scenes is really great and every one of us loves working on the tour. Having to supply the IMAG on the tour this time, was a challenge but a happy one, as the show looked incredible.”