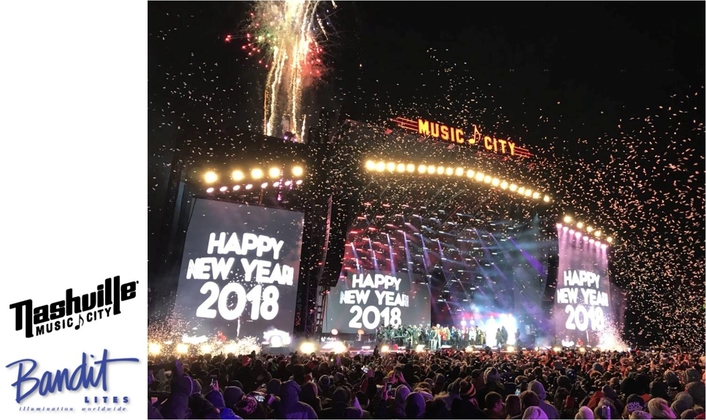 “As this was the second year on this site, we had a lot of knowledge on ways to improve based on last year’s show and ways to continue to brand this event,” said Parker. “One of the top priorities with everyone (after safety) is to create a vibe across the entire site for people to enjoy their evening and celebrate bringing in the new year, whatever that means to them.” 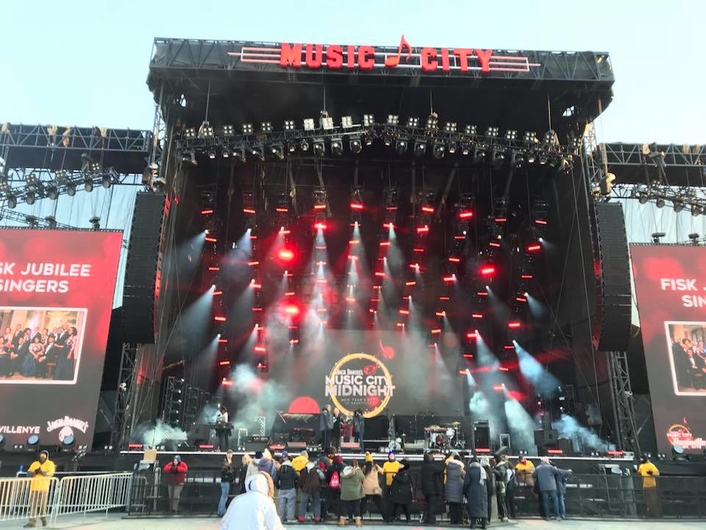 “As far as the stage design, the goal was to make it look big for those people in the front row and at the back of the field alike,” Parker said. “With that in mind, I worked through a design that I felt was clean and classy, but would give big looks and be camera friendly for either video or photos.”

Taking into account the element of unforeseeable weather conditions, the team utilized IP rated fixtures that could function in potentially wet circumstances, and while the day of the event was dry, the massive amount of bright and vibrant Elation Paladins held up in the extreme cold.

The iconic Music City note dropped twice, once at 6 P.M. to denote the New Year in London and to recognize the new direct flight between the two cities, and again at midnight in Nashville. Elation SixPar 100 and Elation SixPar 1000 illuminated the tower, along with Chauvet Iluminarc panels.

“As the clock approached midnight I needed the tower with the Music City Music Note to look sexy as hell,” Parker said. “As the note lowered turning the page to 2018, everything needed to pop! I also wanted the crowd to feel like they were a part of the moment; bright and energetic was our vision!”

“I admire the vision from Butch Spyridon and David Spencer to take this event to the next level,” said Bandit’s Vice President Mike Golden. “It took an incredible group to pull this event off and I must applaud the city’s efforts as well as the production team of Lisle, Parker and Anderson for their focus and dedication.”

“The planning that went into the project with Bandit Project Manager Matt King and Michael Golden was instrumental and the execution was phenomenal,” Parker shared. “Even with the last-minute changes and additions I would make onsite once things were going in, the crew all jumped in to make it right. They were all there for the same reason: to help the people of Nashville bring in the New Year.”