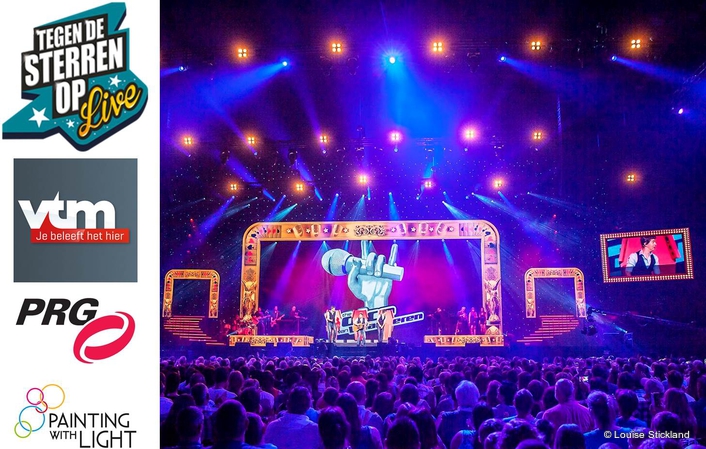 No one - politicians, pop stars, TV and other celebrities and well known faces – escaped the hilarious, cutting-edge, incisive humour   … which poked fun and parodied the trending topics of the moment. Even ‘Donald Trump’ made an appearance at this year’s event, the third time that production company DEDS IT has staged the ‘live’ TDSO show for broadcaster VTM, and the first time at the massive Sportpalais venue.

Luc created a bespoke digital scenery concept for the first TDSO live show a year ago (at the nearby Lotto Arena) and this was utilized again to replicate the large golden portal / pros arch that is instantly recognisable from the TV show. 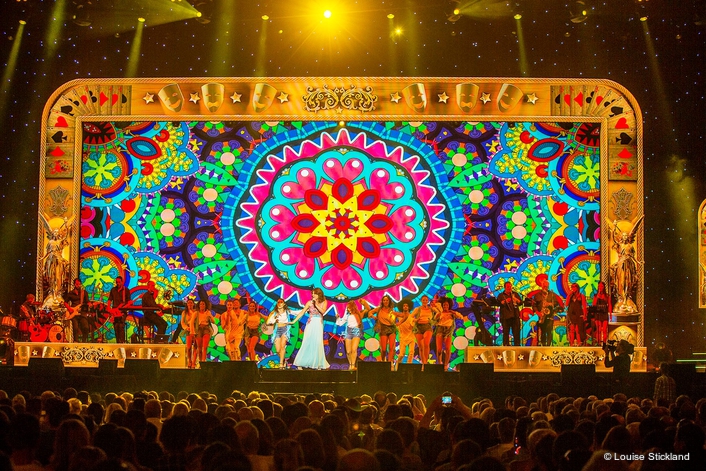 In the Sportpalais, this measured 18 metres wide by 9 high, and upstage was an 18 metre wide by 9 metre high block of LED screen which split in the middle and tracked apart for entrances and exits. The two curved staircases either side of the main arch were also crowned with smaller matching LED portals, and two side IMAG screens ensured the action onstage reached everyone in the vast arena wherever they were sitting. The two band risers – downstage left and right – were also clad in the same LED surface – a 7.5 mm Roe product.

“One of the biggest challenges was to make an arena environment intimate and comfortable enough to successfully deliver comedy, which is a very personal and close-up genre of performance,” commented Luc. 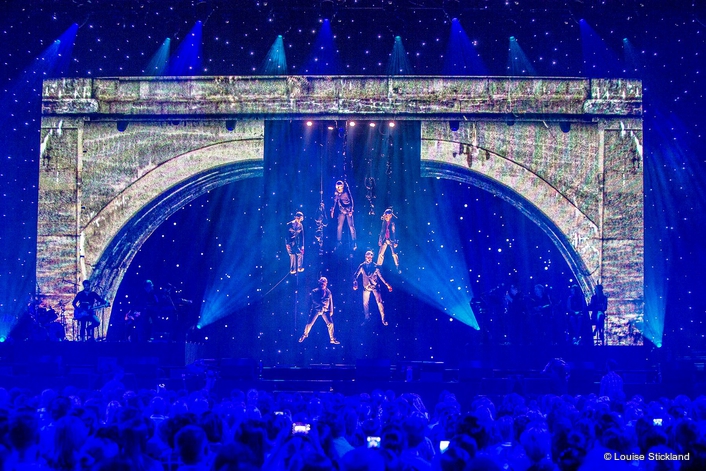 All the playback video content like intro loops, stings, logos, motion graphics and digital branding used in the show was created by Painting with Light’s Michael Al Far especially for the TDSO live show, and they also edited and reworked some original VT clips that were provided by DEDS IT. Michael was supported by visual artists Katleen Selleslagh and Aitor Biedma. Jo Pauly programmed the d3 4x4 Pro media server used for control, which was supplied to the production by Painting with Light and run by Yo.

Painting with Light has recently made a substantial investment in d3 Technologies, and the system proved its adaptability and power during the intense programming period that started two weeks in advance - and continued on site, with sketches changing right up until the last moment to keep the action completely current with the latest news and developments. 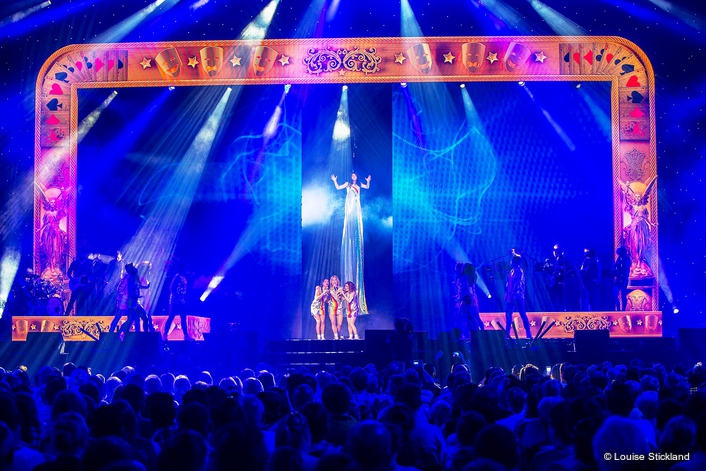 The content process for the 35 sketches started with a brief from show director David Ottenburgh on the setting and scenarios … and Michael went from there!

The portal and the LED screen give the visuals team and producers ultimate flexibility – the large set piece could instantly be disappeared, bringing a completely different look to the space. This was essential to keep up with pace, energy and dynamic of the show, which saw the nine highly talented TGSO actors play 105 characters in 2.5 hours of performance – all needing bespoke, fresh and different locations, scenery and scenarios!

The penultimate skit of the show involved 25 favourite characters from the previous year’s TV broadcasts … appearing onstage in 400 seconds … complete with stopwatch, bringing the concept of ‘quick change’ to new and dizzying heights of achievement!

The swooshing red velvet TDSO drape familiar to TV viewers was very much in evidence – recreated digitally – complete with naturalistic movement and a real 3D appearance – impossible to identify as a virtual replica without a close examination!

The lighting scheme was created by Luc and programmed by Carlo Zaenen as the ‘executive LD’ working closely with operator Leon Driesson, freeing up Luc to oversee this and three other high profile projects running concurrently. Talented LDs in their own right, they and Jo Pauly have all worked with Luc on other projects and make a great FOH team.

The rig was based around the central requirements of providing a good balance for the cameras – the show was recorded for future broadcast and DVD – and ensuring that all the viewers enjoyed some great ‘live’ theatrical drama. 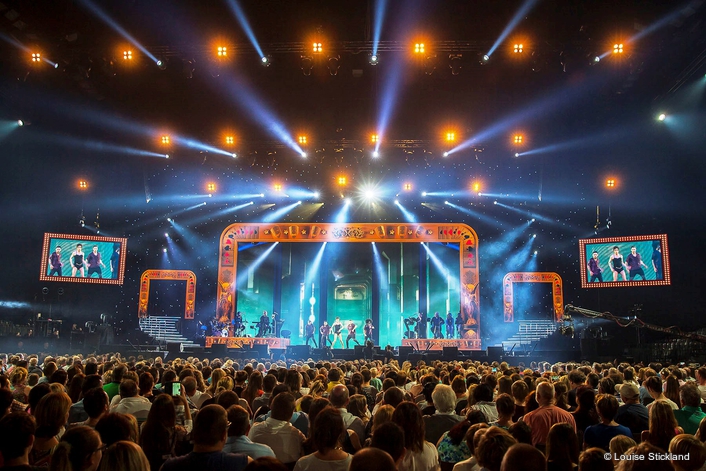 Lighting and video were developed together with a lot of colour and tonal complimenting and contrasting between the two mediums, producing a series of coherent and slickly polished looks with plenty of depth and detail.

The moving lights were a mix of Vari*Lite 3500 and 3000 Spots for keying and Vari*Lite 3500 Washes for the back and over-stage coverage, combined with Sharpie Washes – around 128 in total of all these types.

For good effect, there were 26 x 4-lite blinders and additional V*L3500 washes to illuminate the audience and involve them in the action – literally and on camera.

One PRG Bad Boy operated via a Ground Control system was used for rear follow spotting and specials – it was a neat and tidy physical solution - together with four Robert Juliat Cyrano followspots out in the house. 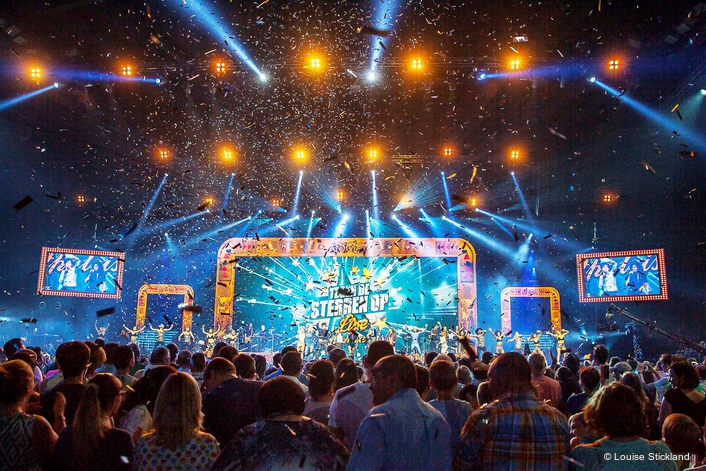 The end result was a fast-moving collage of caricature, colour, high impact imagery and side-splitting laughter in a great production uniting the genres of TV comedy the live show experience, and taking the ‘comedy is the new rock ‘n’ roll’ mantra to new standards of presentation.