Painting With Light Has The Passion

The ‘end’ projections cover a surface area of 21 metres wide by 8 metres high
Belgian creative visual design practice Painting With Light headed by Luc Peumans has crafted the eye-catching design for the current Holiday On Ice touring production, ‘Passion’, which highlights some of the dreams, trials, tribulations and dedication required by those pursuing ice skating careers.

Playing to enthusiastic reviews and audiences, it’s the first year that Genk based Painting With Light has produced a fully comprehensive creative concept encompassing all the disciplines – lighting, set and video – one of many strengths  enabled by Luc and his talented team of associates.

This scenario allowed Luc to maintain a complete visual harmony for the work, and also gave the scope to design several new and bespoke lighting elements including wireless controlled LED soles that clamp to the base of the stakes.

Says Luc, “With ‘Passion’ being partly autobiographical in relation to the ambition and perfectionism driving professional ice skaters, there were plenty of possibilities. We worked very closely with Show Director Bart Colby-Doerfler on developing a very personal aesthetic to present this piece”.

They started on the practical front, by designing a (pre-rig) trussing mother grid flown above the ice that provides key positions for all the main lighting and AV kit.

Video
This includes the six Barco HD projectors - two 26Ks feeding the projection surfaces at one end of the space comprising six rotating projection panels framed by a 3D shaped theatre portal - with four 20Ks projecting down onto the ice. 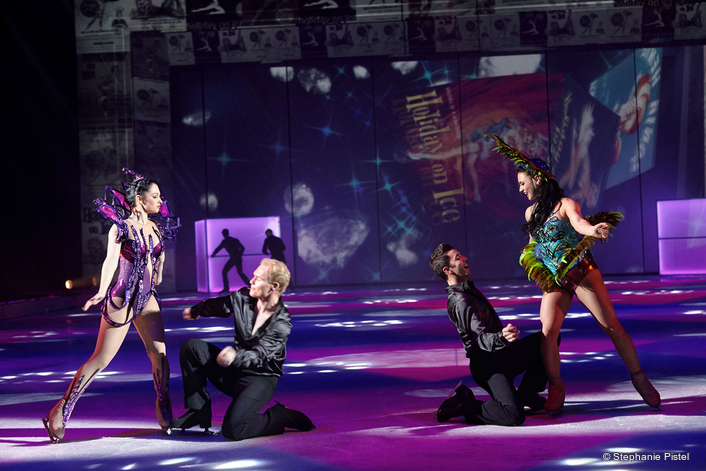 The ‘end’ projections cover a surface area of 21 metres wide by 8 metres high made up of six rotating DMX controlled screens and the images provide narrative support and locational information. A double row of custom LED lines frames the set portals, a little bit of trickery making it appear like one solid piece of scenery at times. These are individually pixel controlled for additional dynamics.

Painting With Light commissioned and created all the show’s video content. On the back wall this includes documentary style footage of the skaters as children imagining their dreams and later on training as their careers unfold. This is all mapped onto the portal and the screens and programmed onto one of their Coolux Pandora’s Box media servers by Painting With Light’s Katleen Selleslagh.

The ice was also mapped so the more ambient content being beamed onto it fits perfectly.

Two IMAG cameras – directed by Jan Gitsels – are also fed into the Pandora’s Box and output to the screens (via the media server) at specific points in the show. The playback is fully automated and activated by timecode. 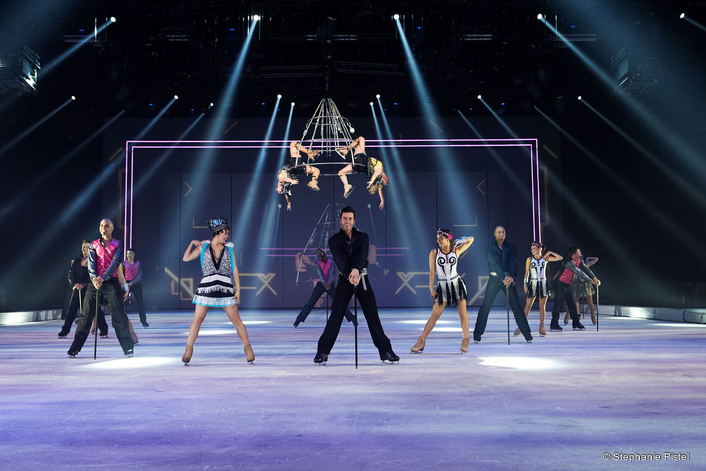 Lighting
With a large 40 x 20 area of ice and a fast moving cast to illuminate, lighting was crucial, and the challenge was finding a balance between mood and effects, ensuring the skaters had enough practical light in which to perform safely and that the projections onto the ice were well lit yet remained bold and well defined.

It also had to look impressive AND fit into five artic trailers, so Luc’s skills and characteristic ingenuity – together with the experience and ideas of the Painting With Light team led by Paco Mispelters, who is also associate Lighting designer on the project  – are all combined in a unique theatricality.

Luc and Bart Colby-Doerfler worked closely on developing the show’s flying elements as well as some other ‘light-props’. In addition to the LED skates these include giant internally lit gliding LED cubes, Moroccan style chandeliers, specialist drapes, a spectacular LED chandelier suspended above the ice plus other ‘practicals’.

Five Chicago-style ‘dance bars’ complete with red and gold velvet draping are dropped in for one scene via a set of Wahlberg DMX-controlled winches of which there are 24 in total on the production.

The LED chandelier is rigged in the centre of the grid and was fabricated by Inventdesign from Amsterdam. Over 200 x 1 metre long DiGidot LED tubes make up its diamond shaped constellation.

Luc   likes the fact that each DiGiDot has 32 x LED pixels on two sides at 180 degrees to one another, making them perfect - with front and back - coverage in this type of application, where artists also take to the air and perform within the chandelier. 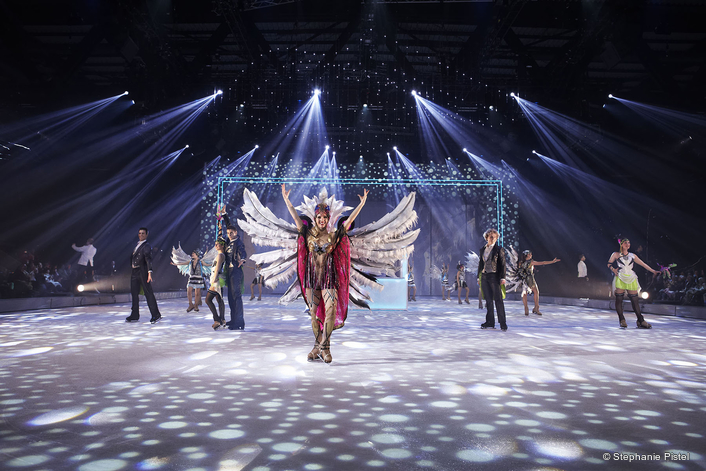 This and the LED skates bring a flourish of flamboyance and it’s also a bit of a Holiday on Ice tradition to have a lit costume aspect in the finale bringing drama, fun and yet more animation to the picture as the cast whiz round the ice at breakneck speed!

The LED module for the skates was designed in house, 3D printed then fitted with six integral RGB LEDs and three hi-powered white LEDs. Each one clamps to the bottom of the skate in a few seconds. The 72 individual skates (36 pairs) are individually DMX controlled from the grandMA2 lighting desk that was programmed by Paco Mispelters … and the effects look super cool.

He likes the MAC III for its big output, fat lens and the framing shutters that enable lots of shapes to be made on the ice, and the beams to be cropped close around the skaters - precision is another key to lighting an ice show

The Rush Beams are used for numerous mid-air effects and eye-candy, while for colour and washes over the ice, there are 33 x MAC 700 Washes and 24 x MAC Aura LED washes with top-hats, all supplied by Focus from Amsterdam.

“We have all enjoyed working with the Stage Entertainment production team again on this show,” comments Luc – who actually celebrates his own landmark of 10 years with Holiday On Ice in 2015. He started off initially creating the lighting design, and as the shows grew in complexity and production values year-on-year and with video coming on-board a couple of years back, this year he produced the full visual picture. 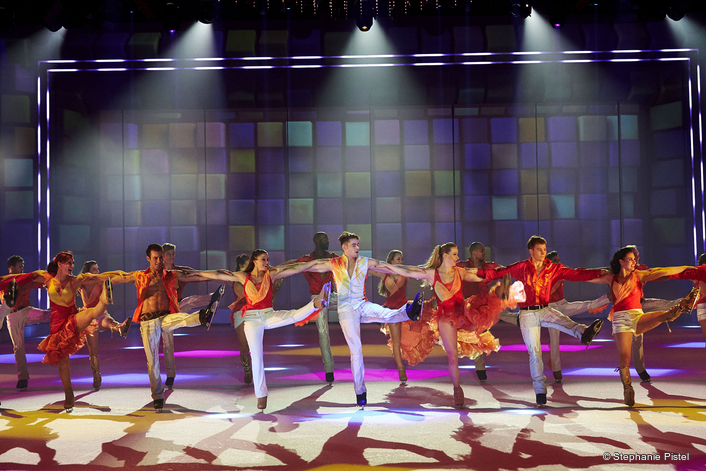 Working on the show as a multi-layered concept has brought a fresh contemporary look as well as new levels of integration. “We are all really proud of this show,” he concludes.

Holiday on Ice’s ‘Passion’ continues touring for the rest of the year.