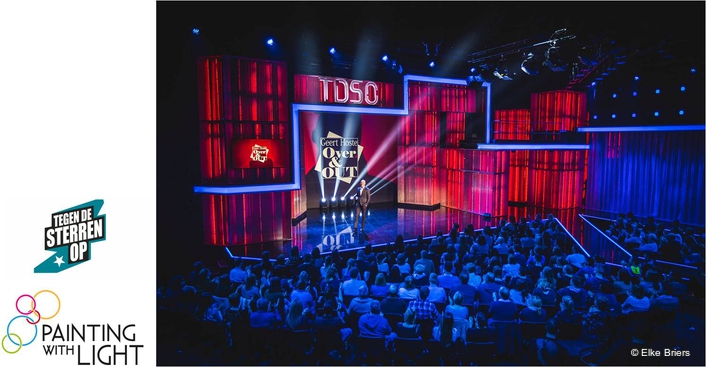 Tegen de Sterren Op (TDSO) is a highly popular, hilariously funny slickly presented TV series on Flemish commercial channel VTM that uncompromisingly satirises and sends up politicians, celebrities and anyone else on the ‘fair game’ radar …. all in the name of incisive entertainment by a very talented cast.
Of course ... there is also an equally talented production team behind this success, including creative practice Painting with Light, who were tasked with designing a completely new set together with lighting and video.
They worked on the set elements with scenic specialist Deusjevoo, their near neighbours at Genk’s C-MINE complex. It was a visual concept that brought an urban chic feel to the seventh TDSO series, also delivering dynamic lighting and video.

The show was recorded in the NEP Studios in Londerzeel with a live audience and was produced by Dedsit.
Two interconnected stages were positioned at 90 degrees to one another, with a catwalk in between going out into the audience, which sat each side of the runway and at the back of the room, ensuring the look stayed contemporary, whilst giving everyone a very close-up and personal ‘stand-up’ feel.
The key was to make the space very flexible.
The set walls were constructed from corrugated wood panels and lit with 322 x integrally mounted 2 metre SGM LT-200 LED graphic tubes. These comprise two sides of 54 LEDs giving a 35 mm pitch, which can be DMX controlled and mapped. They back-lit and highlighted the set highly effectively, setting the tone for the wide range of sketches and skits unfolding on stage. 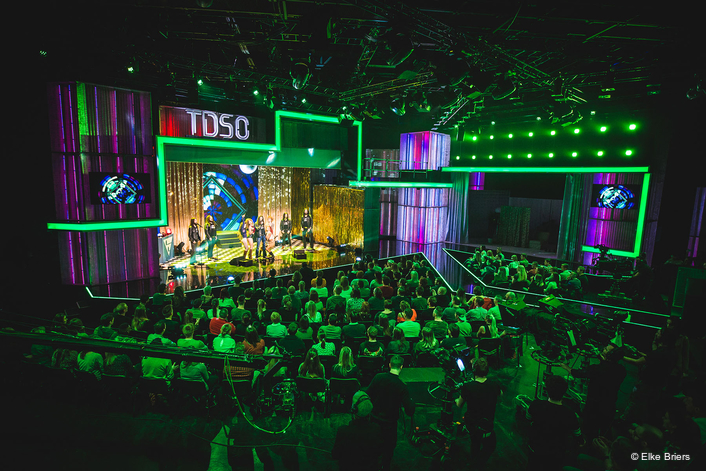 Luc had used the LT-200s before on a musical project, so he knew they were an interesting and adaptable fixture. In conjunction with the wooden set panels, they were a perfect solution for both for lighting the set and creating jazzy, eye-candy effects when needed.
The main stage featured two projection screens.
When a narrow stage was needed, an electric roll-up front projection screen - 9 metres wide by 5 high – came down and the action took place in front, with the screen acting as a digital backdrop. When rolled up, it revealed the full depth of the stage behind, complete with an upstage projection screen measuring 11 metres wide by 6 high, which was back projected.
Both screens were in 16:9 perspective. 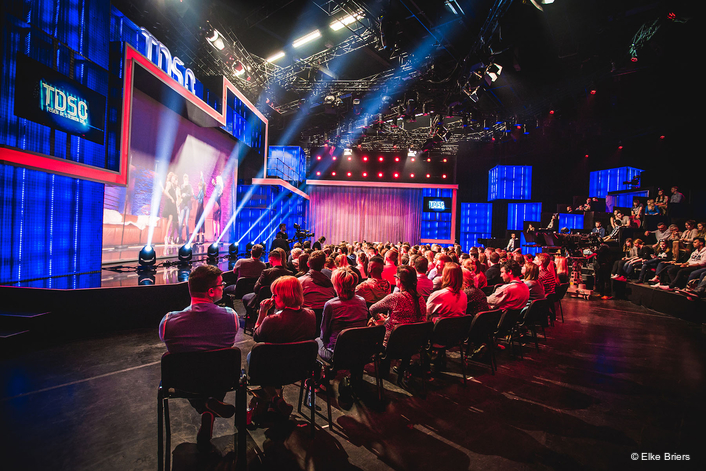 The front screen was also used as a general display or IMAG for the audience and allowed quick scene changeovers to take place behind.
The screen projections were produced using three Christie 18K Roadster machines, one for the front, and a double stacked pair at the back.
Lighting also had to be versatile, fluid and properly ‘multi-purpose’, so Luc specified 36 x Robe Pointes, 24 x Vari*Lite 3500Q (quiet) Spots, 48 x Phlippo URC 210 Zooms - a proprietary unit from lighting and video vendor Phlippo Showlight, 24 x Claypaky Alpha Spot 1500s and 24 x CP Sharpy Washes.
“There was a lot of space and numerous different scenarios to cover” explained Luc, “So every light had to be able to multi-task!”
In addition to these he added 18 x 2K fresnels, 29 x halogen PARs and 36 x LED PARs to the plot. 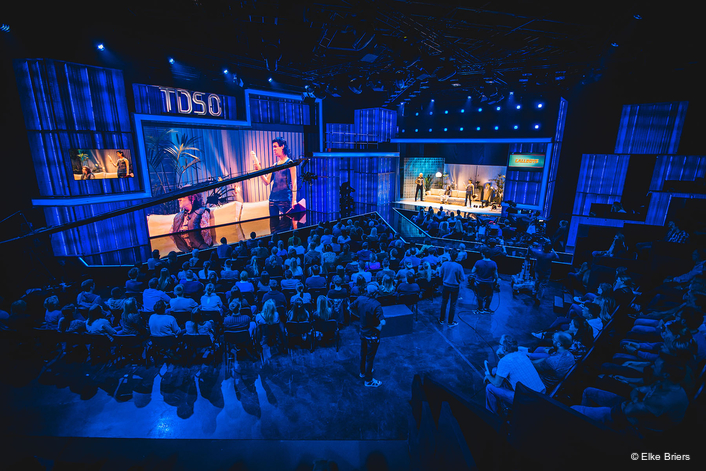 Most of the lighting was rigged in the studio roof to keep the floor clean and clear. They made use of the house trussing grip and positioned spots and washes all over this to get the best coverage across the entire set, and also added two trusses that could be moved into higher or lower positions to facilitate further options.
Ten of the Robe Pointes and 14 x URC power-LED strips were ‘floating’ fixtures available to deploy on the deck as and where needed.
Every two-weekly recording day was preceded by a production and creative brainstorming session a week before, an intense period where the director, video, lighting and sound departments all pitched ideas for how each sketch should be delivered. At the end of it they had a list of technical add-ons for every episode like lasers, smoke, pyro, etc. all of which Painting with Light would order, co-ordinate and integrate into the show. 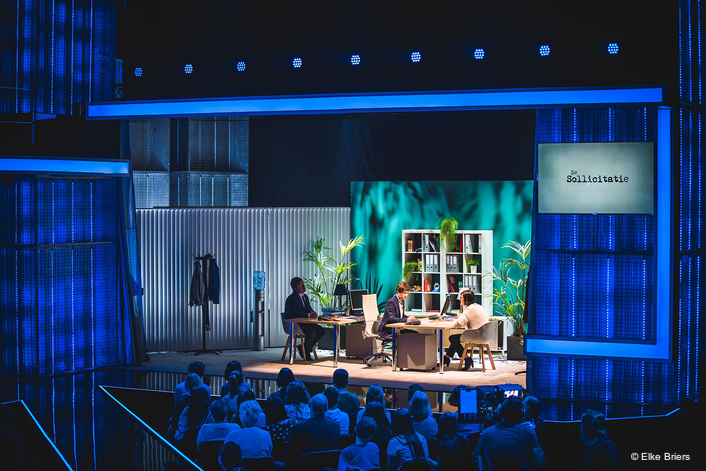 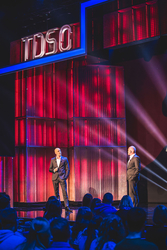 There would then be one day of rehearsals without cameras, one day with cameras and one official show day where they shot two episodes – one take straight through to get it as ‘live’ as possible - which were broadcast a few days later.
Luc comments that this is a challenging but very inspiring and invigorating way to work. “Teamwork is essential, and we are all working and thinking spontaneously and on our feet because the director is expecting ideas to flow super-quickly! It is quite an adrenalin hit!”
Painting with Light supplied the lighting and video control package. Paco Mispelters was the lighting director and the lights were programmed onto a grandMA2 by Jeroen Opsteyn. The Pandora’s Box media servers were programmed by Painting with Light’s Katleen Selleslagh, while video content was created by Bart Tauwenberg from New Solid.