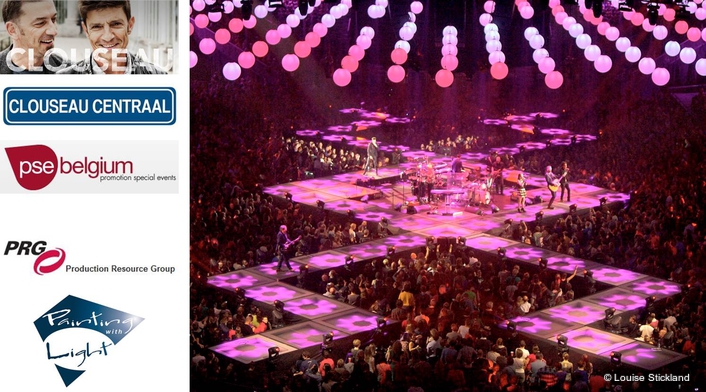 .
Maverick Belgian superstars Clouseau rocked the first two (of four) spectacular “Clouseau Central” shows at the Antwerp Sportpalais, complete with stage, set, lighting and visuals designed - to match the profile of the occasion - by Luc Peumans from creative design practice, Painting With Light.

The band last played the Sportpalais four years ago, in a series of landmark multi-date end-of-year shows that had become an annual end of year concert experience. Back in 2014 in some style with a 6 month tour, they wanted to end the year with a performance phenomenon that was high-impact and memorable and different.

The initial concept discussions between Luc and lead singer Koen Wauters started nine months in advance. Of all the shows that the band have performed in Belgium’s favourite arena … they enjoyed 2003’s in the round presentation the most. 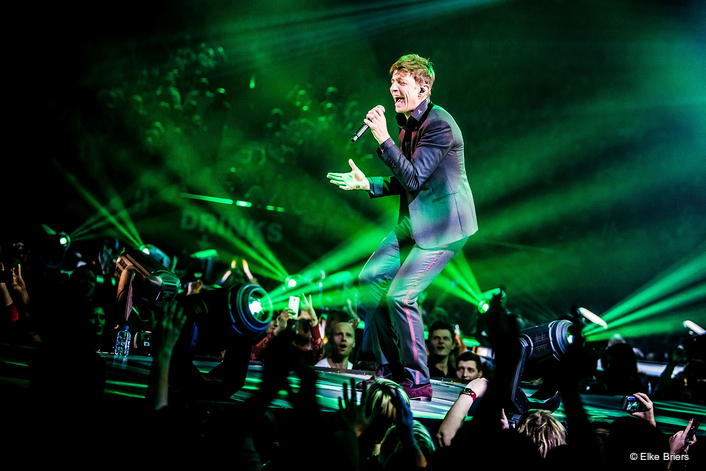 Clouseau have a huge rapport with their fans, and Koen, as the charismatic and highly engaging front man, loves to be close to the crowds, so they decided once again that ‘in-the-round’ was the route to take.

To make it original and different, Luc then proposed a set design based on a rectangular stage in the middle of the arena with four zig-zagging runways coming out from each corner  and running right down the length of the auditorium. 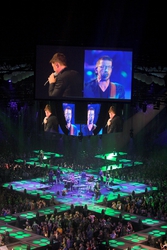 Every 2 metres, the top of the runways were printed with a 3D blocked design, which really came alive when lit, adding another spacial dimension to the look and feel of the space , especially for all those viewing from above. The stage was constructed by StageCo.

The design idea was also a bit hit with promoters Jan Van Esbroeck from PSE Belgium as it enabled a capacity of 21,000. All four shows sold out within minutes of going on sale!

Positioning all the kit in an in-the-round (or even in-the-rectangle!) environment is always a challenge, the arena has an upper balcony as well as raked bleachers, and Luc had to ensure that everyone could see all the stage action and that the performance looked visually interesting from all angles.

Apart from creating a great sense of spectacle and anticipation with the design, as the four shows were in two sets of two consecutive dates, it also had to be practical to get in and out!

Where possible, Luc prefers to design all the visual elements for a show as it brings a fluidity and coherence to the bigger picture, so this was a great opportunity for him to showcase this integration as well as the multi-disciplined approach characteristic of Painting With Light

Scenic pieces for in-the-round shows are always problematic, so Luc decided that a kinetic ceiling would be a flexible and exciting piece of architecture to complement the stage below.

He imagineered a grid of 300 LED ‘pixel balls’ each suspended on individually DMX-controlled winches which ran the full  50 metre length of the set, out to the ends of the runways. 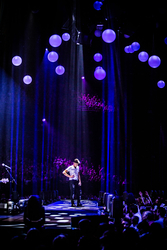 The eye-catching bespoke system was fabricated and supplied by Inventdesign and purchased by the production.  The winches were run from the grandMA2 lighting console merged with a MADRIX system and could fly into different positions, totally shifting the look and dynamics of the space as well as changing colour. The 50 cm diameter balls were flown 2.07 metres apart.

A main role of lighting was to ramp up the drama and help deliver an extraordinary Clouseau experience to everyone present.

The first lighting brain-teaser that Luc set himself with the design was the millimetre-precise positioning of 108 Robe Pointe moving lights all around the stage and runways …  so when they were in the direct upright position … they didn’t illuminate any of the 300 pixel balls in the roof!

These Pointes were used to throw beams around the room and into the audience adding lots of depth. The ‘jail-bar’ looks he programmed for them instantly defined the stage space. A further 20 x Pointes were hung underneath the main balcony around the arena – run in spot mode, their brightness was impressive - and the other 76 x Pointes were dotted around the network of overhead trusses flown above the stage.

Also greatly adding to the creative tool-box were 76 x SGM Q7 LED strobes which were highly effective for intense punctuation points that illuminated the entire venue.

All the lighting – around 500 fixtures in total - was programmed by Luc and Painting With Light’s Paco Mispelters, and operated by Paco.

As you would expect, video was also an integral part of the show, but it was vital that it didn’t distract from the stage action and the band so its most important role was as a vehicle for IMAG and ensuring that everyone even in the further reaches of the arena could get a great  view. 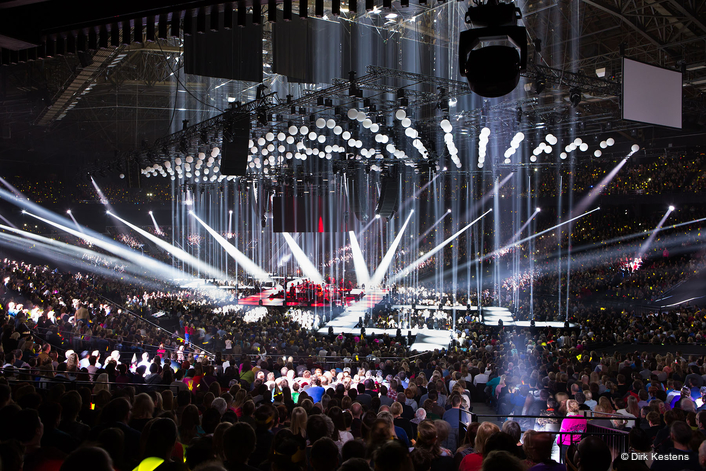 A large central LED ‘cube’ was built directly above centre-stage, which together with four delay screens – one facing in each direction flown in the roof further out from the centre - allowed all 21,000 fans each night to enjoy Video Director Hans Pancake’s dynamic six camera mix.

The main LED cube was made up from 60 square metres of Roe MC7 7 mm pitch high definition LED surface, – specified by Peumans for its quality output and light weight which makes it easy to rig. The projection screens were fed by (2) (Panasonic 12K) projectors also rigged in the roof. 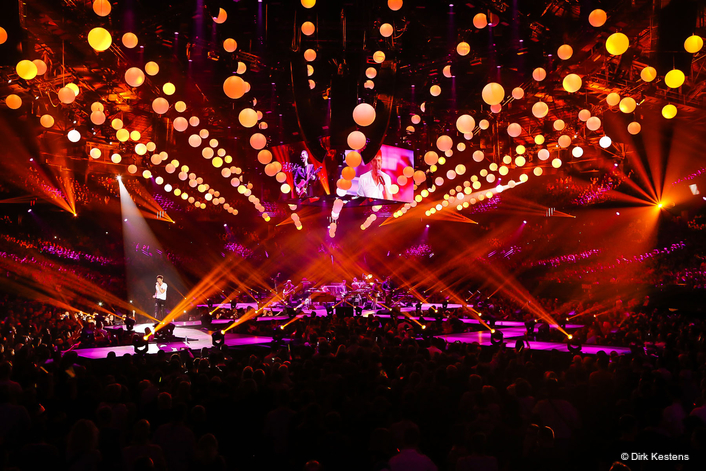 The inside of the video cube was clad with GLEC Phantom 30 low res transparent LED product, so the many audience standing at floor level and looking directly up at the stage could also see content being displayed on the under-side … rather than looking into a black hole.

It’s attention to details like this which make Painting With Light stand out.

Michael Alfar and Aitor Biedma from Painting With Light created custom video content for the show, which was stored on a Coolux media server programmed and run by PWL’s Katleen Selleslagh. This was integrated tastefully with the IMAG images being shown onscreen. 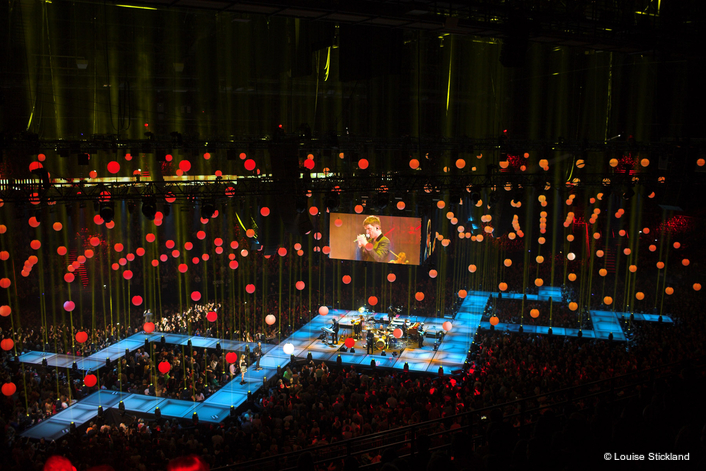 Custom show video content (from the Pandora’s Box) was also played out to the venue’s own LED banner which forms a digital border around the front of the balcony which circles the entire space.

As with any large scale show, smoke and atmosphere were another vital element to the visual mix – just enough is needed to enhance the lighting but not to impair the video experience. Any hazing also has to contend with the venue’s efficient AC system, so another fine balance was required for which they used two Concept Vi-Count hazers and six Look Systems Viper NT2.6 foggers. 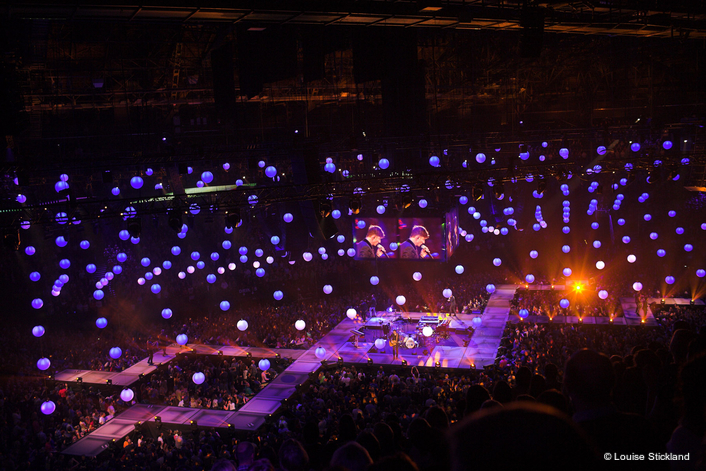 Clouseau unfolded their epic high-energy set over three and a half hours – with a short break so all could draw breath! Many highlights included a breath-taking aerial stunt with Koen attached to a Fly-By-Wire winch system from Toprek Rigging, flying out to the balconies and touching hands with fans around the Sportpalais to the absolute delight of the audience!

All the main technical equipment – rigging, lighting, sound and video – was supplied by PRG. The Lighting Crew Chief was Filip Van Broeckhoven and the Production Manager was Walter D’Haese.

“I was extremely proud to be a part of the team that brought this show to fruition” says Luc, “A lot of ingenuity, heart and soul and some incredible collaboration went into the production … and I think the results spoke for themselves”.

Clouseau Are Painted With Light
Painting with Light for Dreamgirls Tour
Painting With Light Helps...elebrate 25 Years of VTM