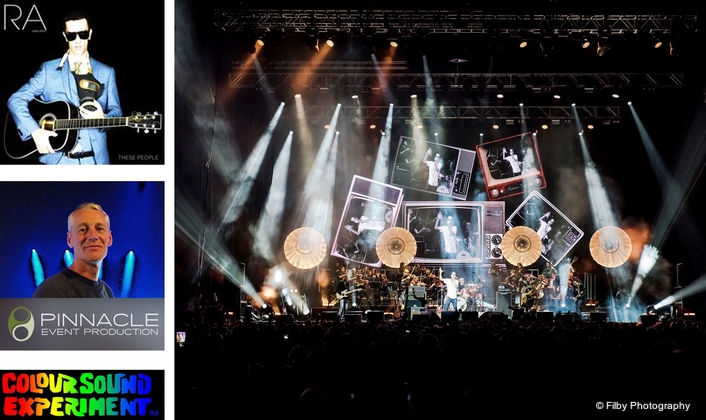 Colour Sound is a regular supplier choice for Jonny whose work this year has also included lighting and visual designs for tours with Rudimental and Tom Odell. “I always get a great service, good and often new kit and brilliant crew, and they are nice people to work with,” he commented.

His working relationship with Richard Ashcroft dates back to the heyday of The Verve when the band – for which he was lead singer - were favourites on the 1990’s alt. rock scene. Ashcroft trusts him to create an appropriate and interesting environment in which he can present his work which, for these two dates, included the 24-piece Heritage Orchestra. 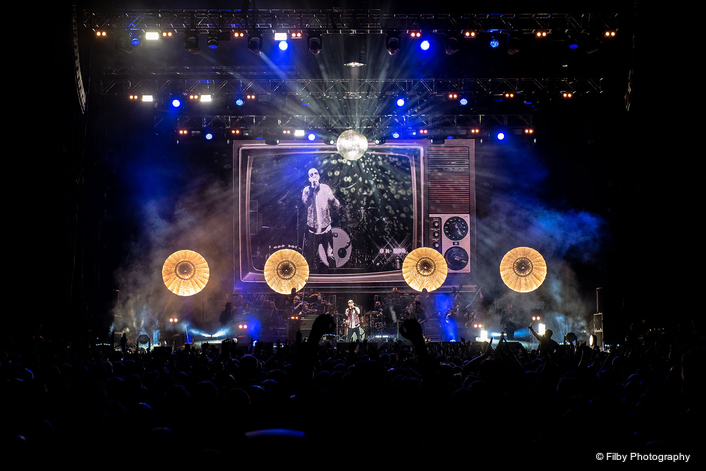 This brought a rich, deep and different tonality and texturing to the music as well as a new visual aspect to the stage.

Jonny started with designing the video playback system. He suggested a large upstage LED screen for the playback material for which live camera director Julian Hogg re-edited some existing and classic Ashcroft music video footage and created some new content, which they decided to ‘repackage’ onscreen in a series of virtual ‘old TV set’ frames … for a retro appearance with a modern twist. 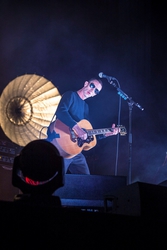 The 40 ft. wide by 20ft high screen was constructed from Colour Sound’s BT-6 HD LED product, with two 3.5 x 5.5 metre side screens added for Julian’s IMAG mix – which was made up from BT-7.

A Green Hippo Hippotizer v4 was used for storing all the playback footage appearing on the main screen. Julian had four operated and four robo-cams at his disposal for the IMAG, with outputs from his mix sent via the Hippo to the main screen and – direct from his PPU – to the two side screens.

Once Jonny and Julian had formulated the video look, Jonny looked at the lighting.

Ashcroft wanted a lightshow that looked big and impressive when needed … but was not overwhelming, so that the music and his performance remained the centre of attention.

Complementing the vintage TV look and adding another strong scenic element were four Briese focus 180 fixtures, a lighting tool for photographers which is a funky shiny photo-umbrella complete with a tungsten lightsource. These looked mega cool as lighting props.

For the main stage lighting trusses he kept things simple – for practical as well as aesthetic reasons, with three straight trusses over the stage – front mid and back.

Added to that was a circular truss flown between the mid and back trusses which had a 1.2 metre diameter mirror ball tucked inside it that flew down for one of the final numbers of the set. 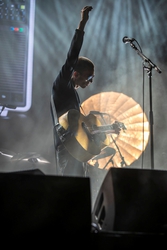 Mirror balls are one of Jonny’s signature effects, and he’s known for coming up with surprising, stunning and never standard ways of integrating this immortal piece of lighting technology – into his designs.

He chose Robe’s BMFL Spots from Colour Sound’s large rental inventory for his main profile units with eight on the front truss for key lighting. They were joined by eight LEDWash 600s, eight 2-lites and eight Claypaky Stormy LED strobes facing into the audience.

He often used the 2-lites to follow Ashcroft’s vocals to enhance the audience interaction moments, a good trick that’s always much appreciated by the artist and his fans.

On the back truss the same four types of primary fixtures were rigged in quantities of eight, to keep the streamlined look. “I didn’t need shed-piles of beam lights or looks on this one” he explained, “The vibe of the show was a good balance between profiles and washes, making sure Richard was the hub of the action ensuring that the band and the orchestra were visible around him”.

On the floor were another eight each BMFL Spots. Of eight LEDWash 600s, two used like floor cans right under Ashcroft’s chin for a bit of moodiness, with the other six distributed upstage. There were also four LEDWash 1200s – two downstage left and right - to cross Ashcroft from low angles.

One Zap Technologies 5K Biglite was rigged on the mid truss directly upstage of his microphone position, bringing a powerful and dramatic collimated beam, particularly effective during the first number as he stood below resplendent in a bling-tastic diamante jacket. 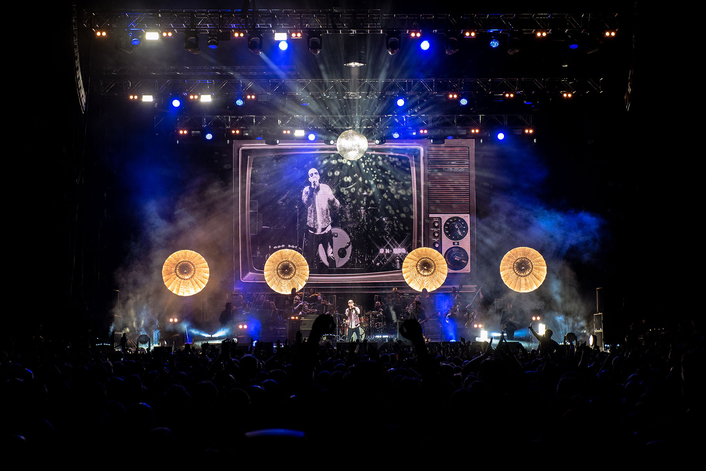 Another six 2-lites and six strobes were positioned around the backline at head height on tank-trap stands.

Jonny operated the show from his own ChamSys control set up. He worked alongside associate LD Joe Beardsmore, who also looked after the Hippotizer during the show, and was joined by a “Fantastic” crew from Colour Sound comprising Andy Melleney, Simon Robertson and Hadyn Williams on lights and Ed Blackwell who tech’d the LED and video.

The challenge was creating an ambitious looking show in a short space of time, but Jonny and Julian Hogg pooled their considerable imaginative resources to make a significant impact. 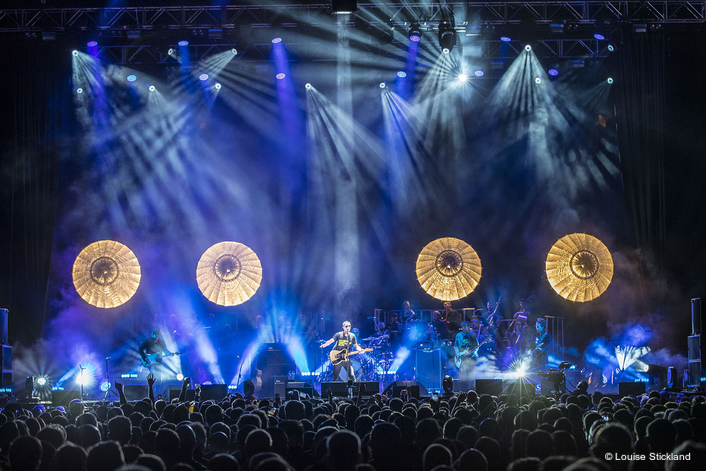 The fact that Jonny knows the music extremely well was a great asset and his good rapport with Ashcroft also enabled some directing to create several moments of drama. The orchestra brought a new dimension which Jonny really enjoyed weaving into the show.

Jonny first started working for the Verve aged 24 and a relative newcomer to the industry and it proved one of his first ‘big breaks’ as a lighting designer, so working with  Ashcroft has a special resonance. He also shares the same hometown of Wigan with the artist … and thinks the music is “Amazing”, which also helps ideas flow for stage presentation.

It was a fantastic end to a mega busy year for Jonny, and Colour Sound’s Haydn Cruickshank (H) commented, “We’ve enjoyed a great year working with Jonny on his various projects! His designs are constantly inventive, he has a keen visual eye and an excellent approach so we all love collaborating with him!”