Colour Sound is the Generation for Rudimental 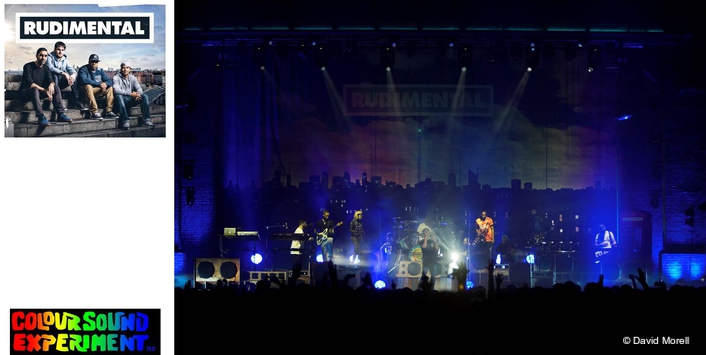 Colour Sound was brought in by Jonny when he became involved with the band as he really likes working with them. “Once again the service was fantastic as you expect! Everything was spot-on, and H (Colour Sound’s MD Haydn Cruickshank) ensured that the kit was absolutely optimised for the available budget as well as supplying an amazing crew!” 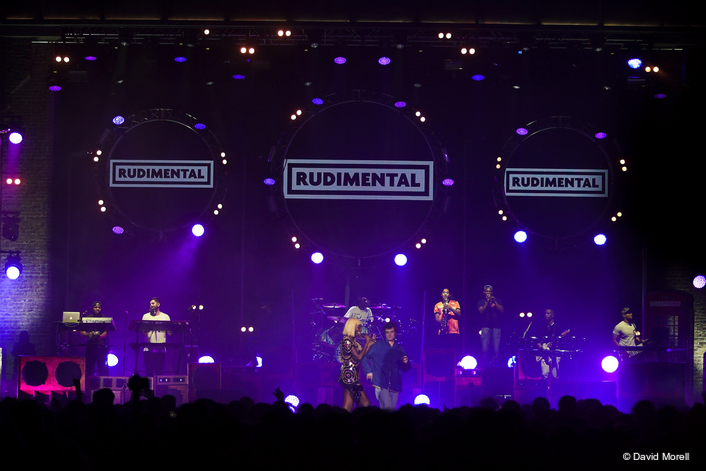 The award winning band are still riding high on the success of their second number one studio album ‘My Generation’ and on this tour played a real mix of venues, mostly academy sized in the UK, followed by the O2, then larger venues in Europe.

An ultimately scalable lighting rig was required. Chronologically it started off in C configuration as a floor package, then expanded to the A-rig for the O2, which was then re-worked onto a B version for the final dates in Europe.  Two trucks expanded to seven for the O2 and these were re-packed – tighter - back into two! 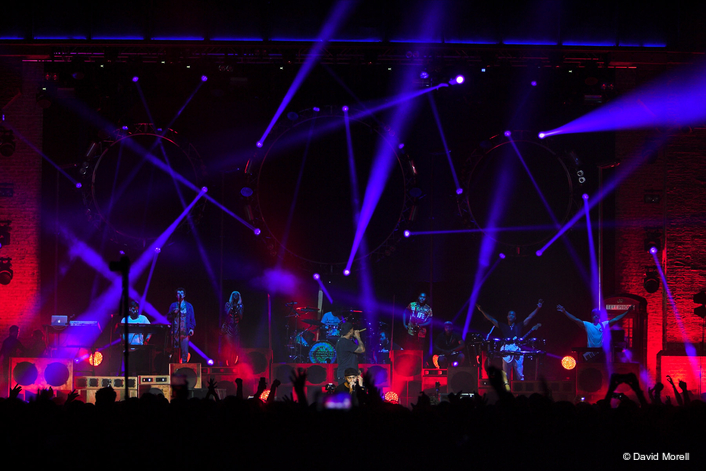 The core crew from Colour Sound were Joe Beardsmore – who also did some additional programming with Jonny - and Simon Robertson.

Jonny doesn’t believe in doing things by halves, so the full rig as featured for the incendiary shows at Alexandra Palace at the end of last year  … ‘and some’ … went in to the O2 for maximum visual impact.

It included the now-famous Hackney railway bridge set prop, a large onstage LED screen at the back with three circular trusses in front, all fully loaded with lights, plus a printed double-layered backdrop on tab tracks downstage of that, which opened and closed to reveal the circles. 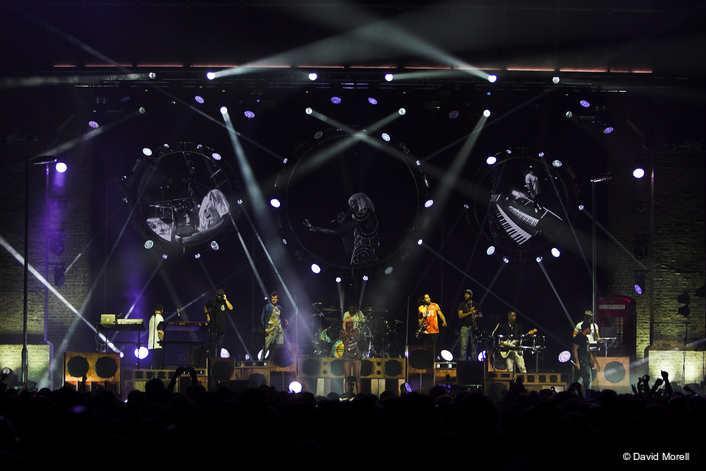 LED side screens were added for the O2 (they’d been projection at Ally Pally and bordering the sides of these were four extra 6 metre vertical drops of trussing rigged with more lights, effectively extending the overall width of the stage area.

Yose Lawson, Ben Love and Dave Jolly from Rigging Machine and the additional Colour Sound crew of Andy Melleney, Frankie McDade and James Hinde had their work cut out to get everything all in, up and ready in a day!

A 60 ft wide front truss was floated just downstage of the Bridge, which was made up from a trussing goalpost. Just upstage of this was a drape truss with a black cloth? masking  the bridge for the two opening acts. On an electric kabuki, this dropped at the top of Rudimental’s set to reveal the bridge. 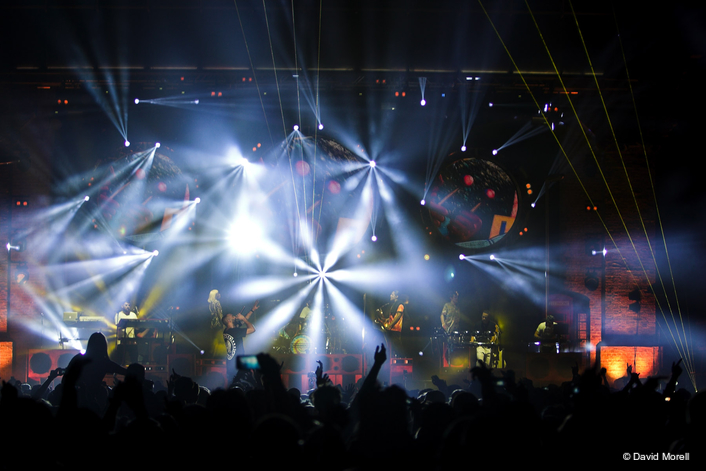 Upstage of the bridge goal-post was the back lighting truss and behind that, the backdrop drape truss (on the tabs).

The moving lights were primarily Robe and Clay Paky starting with 10 x Robe MMX Spots  as key lights on the front truss.

Twenty-eight Robe BMFL Spots on the upstage trusses and floor made their presence felt, and spread out over the entire rig were 88 x Robe LEDWash 600s which were the primary wash fixtures.

They were complimented with the piercing beams of 46 x Clay Paky Sharpies positioned on the vertical trusses, the circles, the bridge and the floor. Forty-six 2-lites were also dotted around everywhere. 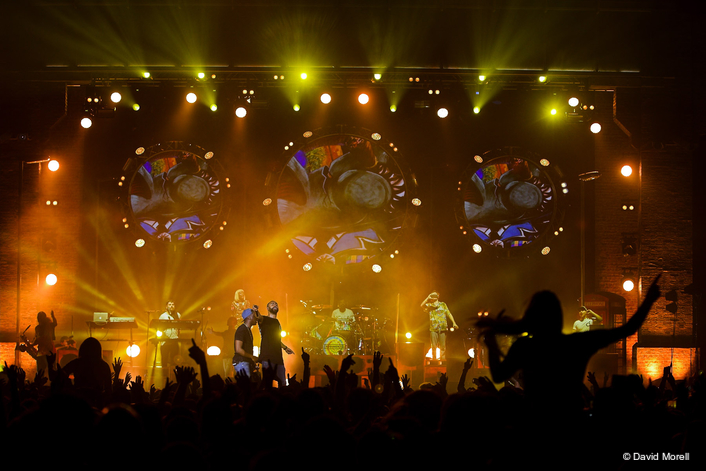 For a huge back-light effect were six Novalight Super-Nova big beam effects, four along the back and another two beneath the side screens, which again stretched out the whole performance area. They were used sparingly in three songs for a nice surprise factor.

The back-cloth is twin sided and designed to work with both back and front light giving daytime and night scenes for different songs. Eight ColorForce 72 LED battens positioned along the floor skimmed up the cloth during the day, while five Studio Due CityColors illuminated it from the back, bleeding through and illuminating buildings and windows on the Hackney cityscape.

The scenic lighting props included six authentic lamp-posts – right off the street, modified for a life of theatrical decadence with the addition of Chauvet mini COLORband PiX fitted in the heads – two per light. The six masts were each lit with an i-Pix Satellite LED ‘brick’, and an SGM XC-5 strobe was concealed in the London phone box, completing the scenic lighting elements.

They utilized four of the O2’s house Gladiator follow spots and Jonny operated the show using his own ChamSys lighting console.