The Aspen Music Festival and School, for decades the presenters of one of the world’s most renowned orchestral music festivals, celebrates its 68th year in 2017. The just-completed Aspen Music Festival and School (known as “AMFS”) encompasses eight weeks every summer, with multiple venues and more than 400 concert events to delight classical music enthusiasts, many of which are broadcast to audiences worldwide. At such a major music festival, sound quality is paramount, which is why Lawo has chosen to help sponsor the event in years past. “Lawo’s commitment to the arts fits perfectly with the caliber of creativity that is nurtured by Aspen,” says Lawo North America sales representative Michael Mueller.” That’s why we wanted to make a contribution to this prestigious music festival.”

Music Is Their Mission
The mission of AMFS is to train and educate students for a professional career in Classical music; the annual Festival is an outgrowth of that mission. Each Festival season, the AMFS presents as many as 400 performances at locations both on campus and off-site, as well as at various symposiums and master classes. 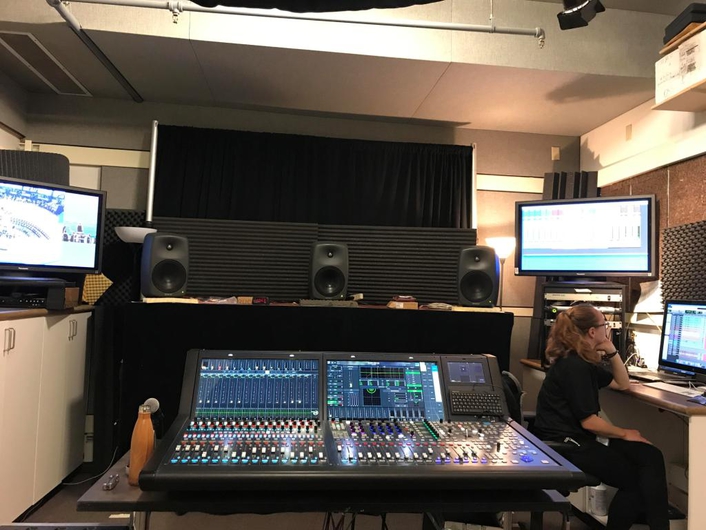 But the centerpiece of the Festival is the 2,050-seat Benedict Music Tent, which is described as combining the acoustics of a concert hall with the ambience of an open-air tent. This is also where AMFS’ Lawo mc256 mixing console plays an indispensable role, delivering a broadcast-quality stereo mix and simultaneous 5.1 surround mix of each performance. These mixes are digitally recorded and archived by the school’s Edgar Stanton Audio Recording Center (ESARC) for later use by broadcasting partners such as American Public Media, SiriusXM, Colorado Public Radio, Aspen Public Radio’s KAJX-FM, and the European Broadcast Union.

The AMFS also uses the Festival as a learning opportunity for audio engineers. “We are responsible for 200 to 250 events during the Festival,” says Scott Wynne, Chief Audio Engineer of ESARC. “Some years we have returning engineers, but sometimes we have an entirely new staff. For some of them, it’s their very first time using equipment from companies such as Lawo or Neumann.”

All this activity in just eight short weeks means the audio engineering staff has very little downtime. “We have 13 audio engineers,” says Wynne, “including Director of Audio Production Lisa Nigris, Head Media Engineer Dan Gonko, four Senior Audio Engineers, three Recording Engineers, and three Assistant Engineers. Every concert requires a minimum of two engineers for recording and a third for live sound mixing, but for a major production – say, a concert by Renée Fleming – all hands are on deck!” 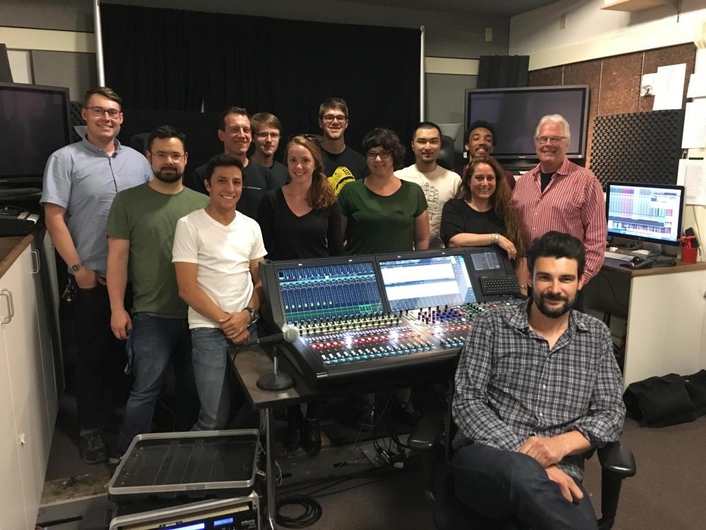 mc256 – The Console Of Choice
Thanks to contributions from a generous benefactor, AMFS recently entered a lease-to-own agreement with Lawo for a 32-fader mc256 MkII mixing console with a Lawo DALLIS frame configured with 32 channels of mic preamplification and 16 channels of audio I/O.

“A couple of years ago our old board died mid-season. You can imagine the stress that caused,” recalls Lisa Nigris, Aspen’s Director of Audio Production. “With our unique mix of 5.1 and stereo recording needs, finding another console that could handle our requirements was really challenging. We had spoken with the Lawo folks, and a few other manufacturers, the previous year at AES so when the convention came around again, discussions became serious and Lawo, the focus.  Lawo was willing to step in as a sponsor allowing us to test drive the gear for the entire 2016 season. What a godsend!”

As Wynne explains, AMFS’ recording needs are unique due to their mix of live sound, audio archiving, and broadcast activities. “We don’t do a Surround mix and then downmix it to stereo,” he says. “We construct discrete mixes on separate console layers, so any moves on one layer must be linked to the other. Many consoles are not capable of this kind of work, but the Lawo is.”
“We went to the AES show in New York and talked to many companies, but once we saw the Lawo console in action at the DiMenna Center for Classical Music, we realized that this was the desk for us. Lawo didn’t have to tell us ‘sure, we can make our console do what you need’ — the capabilities we needed were already built in.”

“During our interview process, being able to tout the use of the Lawo console was very enticing to prospective engineers.” adds Nigris. “Who wouldn’t want to learn to use the same board used by The Tonight Show and the Olympics?”
“The Lawo mc256 has a number of features that really make work in the Tent much easier,” says Head Media Engineer Dan Gonko, who oversees quality control of recordings, live radio broadcasts and internet streams.

Gonko says that one of the mc2’s best features is its flexibility. “There’s a lot of depth to the console, but it’s laid out in a very understandable way. A lot of boards simply don’t have that combination of ease of use and ease of customization. For a dozen mixing engineers to have a one-hour training session and then be able to fully customize each individual board layout in just 30 minutes speaks volumes about Lawo’s ease of use.
“Also, the ability to actually customize the layout of the desk on a per-engineer basis is huge. The console has six banks of fader configurations available, each with two different layouts, so 12 custom setups are possible, meaning each engineer can customize the board to their individual workflow on a per-concert basis.

“The quality of the mc2’s processing is wonderful. Compressing, limiting and EQ are all very neutral — something you really need for classical work; you don’t want the processing to color the sound. Being able to impart some compression or EQ on mics and have it sound transparent – literally not hear it’s there – is fantastic.”
Gonko also likes the console’s built-in digital delay system. “The ability to tweak input delays is really useful,” says Gonko. “Being in a hall, with a live mix using a primary Decca tree hang, and being able to delay spot mics when they’re dropped in so that their arrival time matches the Decca tree is critical. And the console’s delay resolution is fantastic — down to 1/100th of a millisecond. It’s wonderful to be able to tailor our mix to that degree.”

Finally, says Gonko, “Built in LUFS metering is fantastic. We never really compress or limit the overall stereo and surround mixes we record, but being able to see what was happening in terms of loudness during the performance speeds up our post work by showing how much farther we have to push the edits to be broadcast compliant.”

Set For The Future
As with any equipment choice, decisions now affect what will be technically possible down the road. With Lawo, AMFS is prepared for new developments.
“Our mission when recording is simply to capture the event, and of course premiere ensembles such as The American String Quartet or the Robert McDuffie and Michael Mills Concerto for Violin, Rock Band, and String Orchestra expect to be recorded at the highest audio quality possible,” says Scott Wynne.

“But recording and mixing for broadcast is much different. Sponsors such as Lawo, Neumann, DPA, Grace Design, and Millennia Media have been instrumental in achieving the level of quality required. This is especially important to us in light of how quickly new technology is developing. We have to ask ourselves: what if RAVENNA becomes dominant because it’s not tied to a specific manufacturer? What if our broadcast partners decide they want to broadcast Dolby Atmos to in-car listeners? When will we need to deliver audio using 96 kHz sampling rates? We don’t have these answers just yet.”

“That’s the lovely thing about Lawo consoles,” Wynne says: “they’re nearly infinitely flexible. All we have to do is work with the company to adapt the mc2’s DSP resources to meet our new needs. Whatever comes next, we’ll be ready for it.”

About the Aspen Music Festival and School
Founded in 1949, the Aspen Music Festival and School is regarded as one of the top classical music festivals in the United States, noted both for its concert programming and its musical training of mostly young-adult music students. The typical eight-week summer season includes more than 400 classical music events—including concerts by five orchestras, solo and chamber music performances, fully staged opera productions, master classes, lectures, and children’s programming—and brings in 100,000 audience members. In the winter, the AMFS presents a small series of recitals and Metropolitan Opera Live in HD screenings.