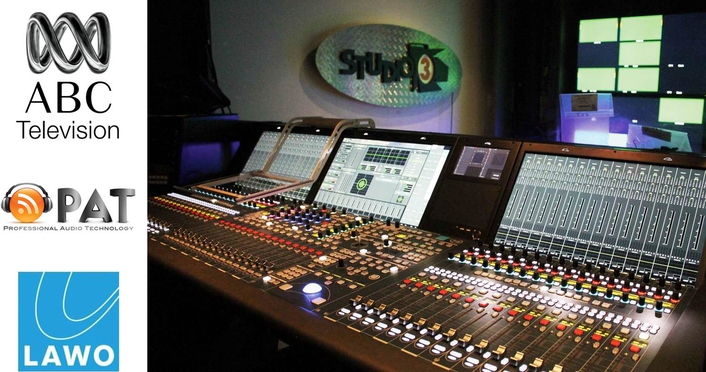 The system, which was commissioned recently, consists of one Lawo mc²90 console with 105 faders and a Lawo 48 fader mc²56 console system. Lawo’s mc²90 flagship console core was supplied with 27 MADI ports, 96 AES3 inputs and outputs, 8 DSP cards including a redundant stand-by card, fully redundant controller cards and power supplies. Two local DALLIS frames in Control Room 31 provided access to all local Control Room I/O, while being connected to the main console core in DCAR via MADI. 6 mobile stage boxes with fully redundant DALLIS frames - each with 48 Mic inputs, 16 Line outputs, 4 AES3 I/O, as well as 4 serial ports - offering maximum flexibility by easily adding additional resources to the console’s MADI fibre infrastructure. In addition to two local DALLIS I/O frames in Control Room 33, the mc²56 NOVA73 HD core was equipped with 18 MADI ports, 64 AES3 I/O channels and 5 DSP cards including a redundant DSP card. Both console systems provide the operators with access to hundreds of VST plugins via two Lawo’s plugin servers located in DCAR, and one of each connected to the consoles MADI infrastructure.

After having been awarded the tender to supply the equipment and provide the installation services as head contractor in June 2014, PAT worked closely with the Lawo project team in Germany to firstly deliver the mc²56 MKII console in August 2014, for ABC’s studio 33. Due to tight project timelines, while Lawo was building and testing the new mc²56 system in Germany, PAT supplied the ABC with a comprehensive fibre network throughout the entire facility to accommodate the new Lawo system and provide maximum flexibility. Managing Director of PAT Patrick Salloch commented that “we had to accommodate TV production schedules while performing this major upgrade of the audio facilities and it was imperative that the PAT project team worked extremely close with Lawo in Germany to assure all timelines were met precisely.”

Once the mc²56 system had been installed and commissioned, PAT’s focus shifted to the install of the mc²90 from mid-September. As the console was delivered in various sections due to its size, specialized Lawo factory engineers assembled and commissioned the 3.2m console in October this year.

Lawo’s CEO and President Philipp Lawo remarked “We are delighted to have supplied the ABC with Lawo's proven cutting edge mc²90 and mc²56 television production consoles. In cooperation with our Australian partner PAT we are looking forward to servicing the ABC in their future broadcasting needs.”