The final live show by Kyosuke Himuro, one of Japan’s most successful pop singers, was an emotional experience for 50,000 Japanese pop fans, being the very last time that they would see the singer/songwriter on stage. Thanks to L-Acoustics KS28 subwoofers, the sold-out Tokyo Dome show was a fitting end to a distinguished live career.

The series of shows billed as Kyosuke Himuro Last Gigs concluded at the Tokyo Dome, with the main audio system supplied by Japanese rental companies Hibino Sound and Tokyo Sanko, who supplied a K1 systems with the new L-Acoustics KS28 subwoofers for the tour.

“Hibino had to deliver every breath of Kyosuke Himuro’s performance perfectly, as it was an experience which none of the audience would ever have again,” says Takayuki Ozaki, managing director of L-Acoustics Japanese distributor Bestec Audio, who had introduced KS28 to Akitsugu Kemmotsu of Measurement Works Co. Ltd, who designed and specified the system for the show. “We wanted it to be a memory that would last a lifetime.”

Tokyo Dome is unusual in that it has an air-supported roof, with weight restrictions that can make designing PAs for such large shows a challenge. The audio system was designed by system engineer Mitsunari ‘Saiji’ Gengoromaru, in consultation with Measurement Works Co. Ltd and Himuro’s Front of House engineer, Kevin Elson.

Saiji has worked as a system engineer on many arena and stadium tours and has found controlling the bandwidth of subwoofers a particular problem. For this show he proposed flying the L-Acoustics KS28 subs, carefully balanced with complimentary ground-stacked units, which had never been done at Tokyo Dome before. Using Soundvision simulation, it was predicted that this would achieve a very even coverage pattern, a prediction confirmed when the system was rigged in the venue. 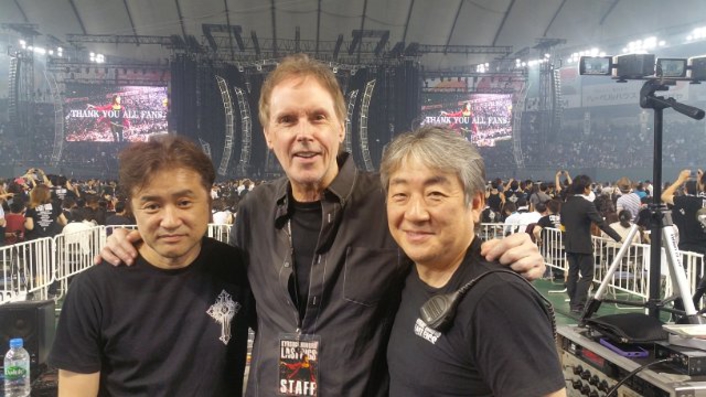 “I had never experienced such an even pattern and sound pressure throughout the entire bandwidth in this venue,” says Akitsugu. “I really appreciated the excellent system,” adds Kevin.

The full system for the show comprised main flown L-R arrays of 20 L-Acoustics K1 and four K2, plus another flown array of 12 KS28 and 16 ground-stacked SB28. Further flown arrays of 16 K1 and eight K2 per side covered the sides of the arena, with fills comprising six-strong flown arrays of Kara and three per side. The entire system was driven by L-Acoustics LA12X and LA8 amplified controllers.
One of the reasons that it was possible to fly the KS28 arrays is because each unit weighs only 79kg, allowing it to be flown at venues where flying subs was previously impossible. In fact, flying subwoofers is not yet common in Japan, due to very stringent standards being imposed because of the frequency of earthquakes here, but the KS28 has demonstrated that it can deliver many advantages, reducing weight loadings for the overall stage design, which in turn greatly influences the total cost of the system.”

And, by using the LA12X amplifier, each KS28 can produce 3dB extra SPL than the SB28. Together, these benefits meant that no delays were needed, and even the back of the audience, 160 meters away, still experienced remarkably tight sub-bass sound.
“The KS28’s mid and low frequency reproduction has been further improved by the new switched-mode power supply (SMPS) with DSP-controlled Power Factor Correction (PFC) of the LA12X, which can maintain the maximum sound pressure level over a longer time, even at 100V” says Takayuki.

“Flying KS28 and K1 arrays next to each other produced a very powerful, evenly-phased system. Despite the audience being 50,000-strong, it delivered very clear low frequencies throughout, which had never been experienced in the Tokyo Dome before. The whole stadium experienced a true ‘rock sound’, which helped to ensure the audience was ‘as one’ with the artist throughout the show. 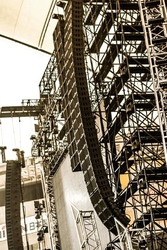 Tankayuki concludes, “Without the many other advantages of L-Acoustics systems, including light weight, ease of rigging, audio quality and accurate Soundvision simulation, the show would have had to use a conventional system, which would have delivered a noticeably poorer experience for the audience.”

* According to the Pollstar 2015 Worldwide Festival grosses