L-Acoustics delivers the sound of tomorrow

Held in the aptly-named Belgian town of Boom, Tomorrowland is one of the biggest electronic music festivals on the planet. The 2016 event attracted 60,000 people on each of three days in July, with almost 600 cabinets of L-Acoustics loudspeakers specified for no less than eight areas, including the huge Main Stage.

The system is owned by Phlippo Productions, an L-Acoustics partner for the past four years, who also supplied eight technicians for the build. Design for the audio systems was by Noizboyz, a group of freelance audio technicians who specialise in live sound for electronic dance music (EDM). They have specified L-Acoustics systems for Tomorrowland since they first became involved with the festival in 2011.

“Back then we started with a V-DOSC / SB218 rig. With the arrival of K1 we changed it to K1 / SB28 and this year we upgraded the main systems to KS28 subs and all LA12X amps,” the Noizboyz technical team explains.

“The main reasons we use L-Acoustics at Tomorrowland are the tonality of the systems, which match EDM really well, and the throw of the K1. The maximum distance we need to project the sound is 160m and K1 is capable of delivering very good sound even at that distance. Another reason is the amount of energy in the low end we get from the K1 - we have to create sound 180° vertically and K1 really helps with extending the low end reach.”

Power was provided by 66 LA12X amplifiers for the Main and Opera Stages, with 116 LA8 and seven LA4X taking care of the other stages and delays. L-Acoustics was also very much in evidence for monitoring, including 32 Kara, 12 SB18 and 10 115XT HiQ, powered by a total of 17 LA8 amplifiers.

“The biggest challenge for us is providing systems with a long enough throw and power to deliver the amount of energy for the high quality sound that Tomorrowland demands,” say Noizboyz. “Another challenge is that the stages are highly decorated and it is not easy to rig a PA between it all. The footprint we need to fly the K1 is really small - it’s that which makes it possible to fly the PAs.” 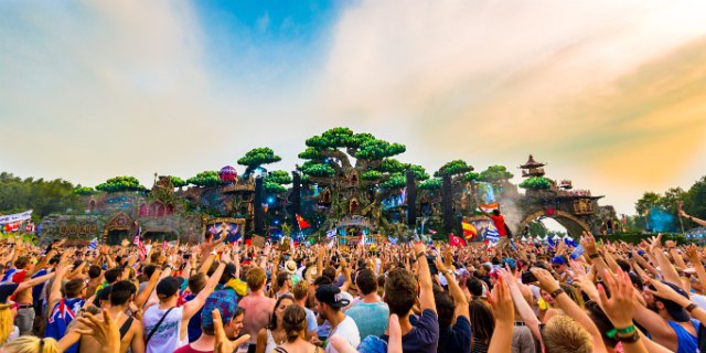 A key ‘first’ this year was the Main and Opera stage systems, which saw the debut of the K1, KS28 subs and LA12X amplifiers combination at Tomorrowland.

“I wish every big show had a system like this!” says the Front of House engineer for Oliver Heldens, who played the Main Stage on the final day of the festival. “It was very well tuned, especially in the low end, which can be tricky with such large arrays and Oliver’s sub-bass heavy music.

“The new KS28s are great - they go a bit deeper, which is exactly what we need. They match the K1 better than any other sub - in fact I ended up running the subs at -6db from the desk! The throw of K1 is also amazing, you can tweak the MF/HF response over distance which is a great addition to the ‘acoustic-mechanical’ feature of a line-array. As I walked around the field, the sound was very consistent and all the fill speakers matched the main system perfectly.”

This benefit of the K-series is also highlighted by Noizboyz, who says “If you use the right speaker for the right job, the sound is seamless between the different types. For example, we used Kara as in and outfills, sometimes as a small delay, so it created an extension from the mains in the high frequency range.”

The Noizboyz team used L-Acoustics Soundvision to predict the coverage of each system, with LA Network Manager software to pre-program the system control, which saved a lot of time on site.

“For us, the whole package makes sense. We design systems in Soundvision, which is very accurate, while the universal way of connecting systems means they are fast to rig and will be exactly the same everywhere in the world,” say Noizboyz. “We can program the amp settings and patches off site, tune the PA using LA Network Manager and can monitor every amplifier during the show, meaning we can create the best sound possible.

“In using the KS28 subs and LA12X amps this year, our clients instantly heard the difference and they loved it.”

“I was impressed with the headroom and how much power the system delivered,” says Oliver Heldens’, Front of House engineer. “With a K1 system you can easily dial in the sound you want and it gives you what you put in, right in your face.”

“Phlippo is proud to be an L-Acoustics partner and to be part of this substantial and successful production,” says Phlippo. “Our investment in L-Acoustics has been extremely successful for us and we will continue to add to our inventory in the future.”