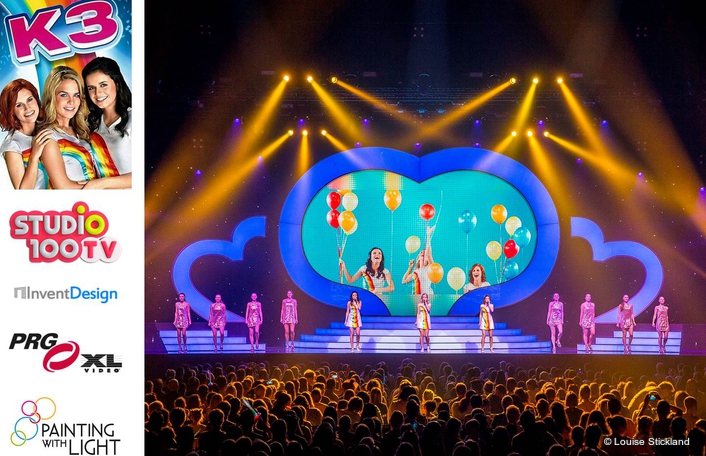 What is now known as ‘the old K3’ exited their career as the most successful girl band in the history of Benelux finishing a 122-date sold-out concert tour that finished on 8th May at Antwerp’s Lotto Arena, having sold over 450,000 tickets in 6 months … complete with lighting design and video content delivered by leading Belgian visual design practice, Painting with Light, led by Luc Peumans.

Concluding a remarkable 17 year career of music, TV, movies, musicals and numerous other associated  projects, Karen Damen, Kristel Verbeke and Josje Huisman double headlined the show with … ‘the new K3’ - Marthe De Pillecyn, Hanne Verbuggen and Klaasje Meijer - who were selected by a national TV competition in Belgium in late 2015 …. to ensure that the K3 concept, managed by production company Studio 100, continues to thrill and delight their enthusiastic audiences. 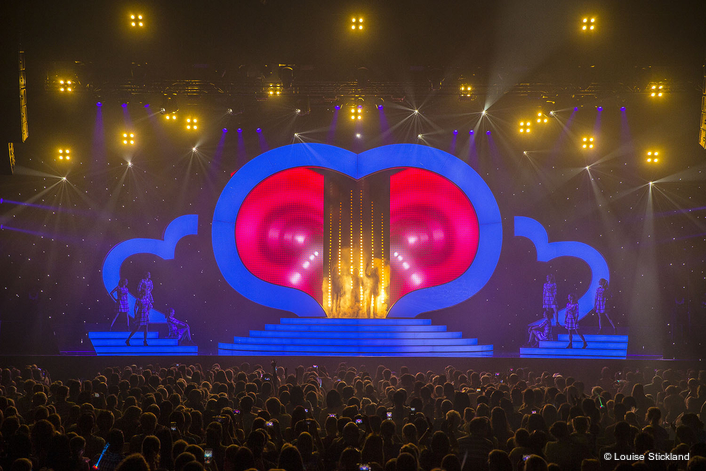 Luc and his team have been involved in the visual presentation of K3’s upbeat, high energy live shows for around 12 years and have refined the task of combining high production and entertainment values with perfectly presented bubble-gum pop.

The set for the ‘K3 presents K3’ tour was designed by Stefaan Haudenhuyse from Studio 100 and took K3’s heart-shaped branding as a starting point, with a massive scenic heart onstage, which at Luc’s suggestion,  was developed into a light box.

Built by Amsterdam based Invent Design, multiple pixel controlled LED strips were fitted inside making it very versatile and able to change colour, texture and appearance. With this being a tour, Luc also made sure that it was practical to build, break-down and transport. 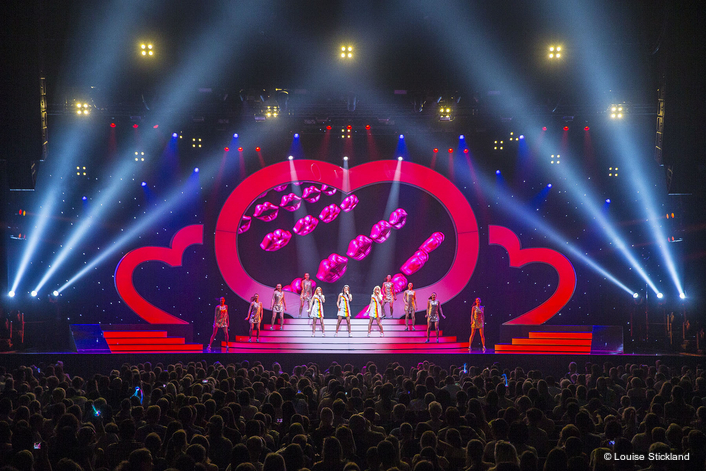 "K3 play a lot of live shows, so it was important to keep all scenic and technical aspects of the current design straightforward, quick and easy to rig and move and also fit expediently into the truck," elucidates Luc.
Lighting and video equipment was supplied by PRG and all of the production including set, sound, staging, wardrobe, etc. travelled in 6 trucks.

Upstage of the heart-shaped light box was a large 10mm LED video screen which opened in the middle for entrances and exits. In front of the heart was a set of steps down onto the stage, fitted with custom medium resolution architectural LED strips, and for the larger shows on the tour – including the Lotto Arena - two side IMAG screens were added. 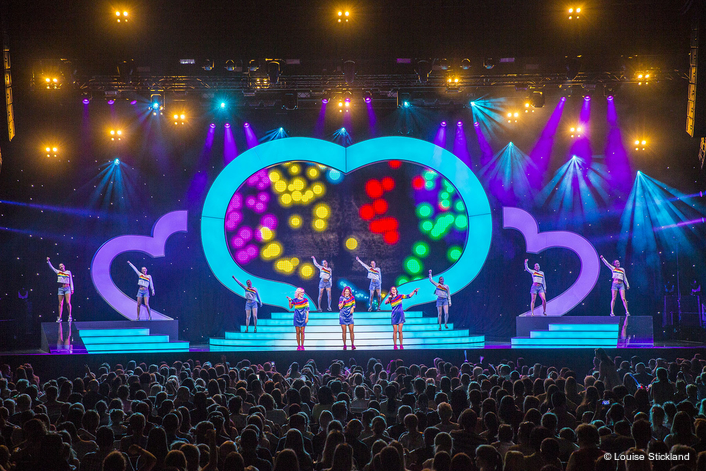 "It was all about introducing subtle depths to the performance space and making it look classy but with a distinctive K3 aesthetic," explained Luc.

Traditionally K3 has always appealed primarily to pre-adolescent children, and this has been reflected in the look and feel of the show since Painting with Light has been involved. However this time, with the changeover, and to evolve the whole K3 phenomenon further, the brief was to make it more stylish and mature … but without losing any of the playfulness and fun!

This was something that could be influenced directly by choices made in the lighting and video content and treatment. 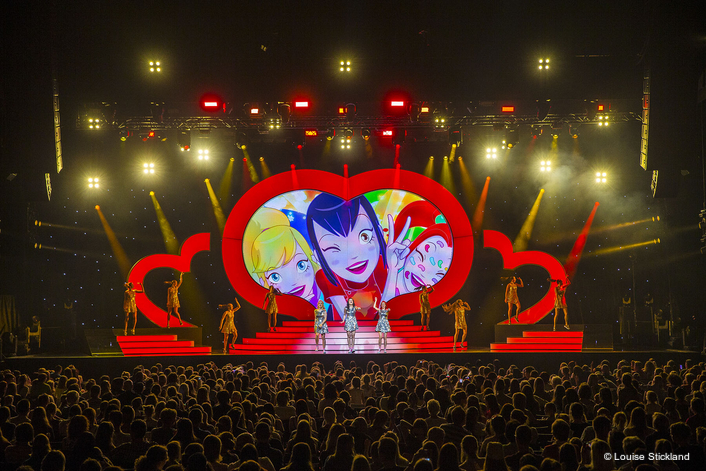 Painting with Light and Studio 100 collaborated closely to ensure the video content had a certain presentational style and flow as well as being harmonious and consistent with this more streamlined vibe.

Being a farewell tour, a lot of playback video on the screen highlighted K3’s career highs including excerpts from their movies and top rated TV show. All of the historical footage and special new custom motion graphics and material created by Jos Claesen for Painting with Light for the tour was stored on one of Painting with Light’s Coolux Pandora’s Box media servers and programmed / operated by Katleen Selleslagh and Jeroen Opsteyn. 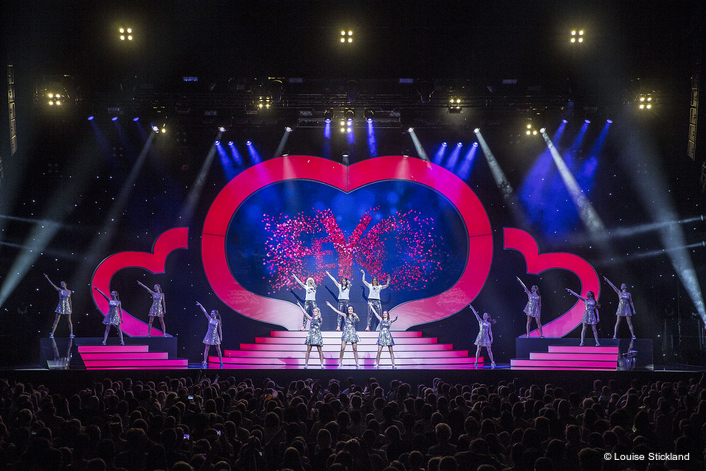 Lighting was designed by Luc and directed on the road by Niels Huybrechts.

Using around 90 moving lights – a mix of PRG Best Boys, Clay Paky Sharpy Washes and Vari*Lite VL3500 Q-Spots – were installed on a series of overhead trusses, and the approach was to mix the disciplines of live show and TV lighting, with lots of drama, colour and excitement helping to deliver a great looking show for the increasingly diverse and mixed audience of K3 fans - old and new.

Twenty-four SGM Q7 RGBW LED strobes and 25 Chauvet STRIKE-4 LED blinders were dotted around in the roof for audience illumination. 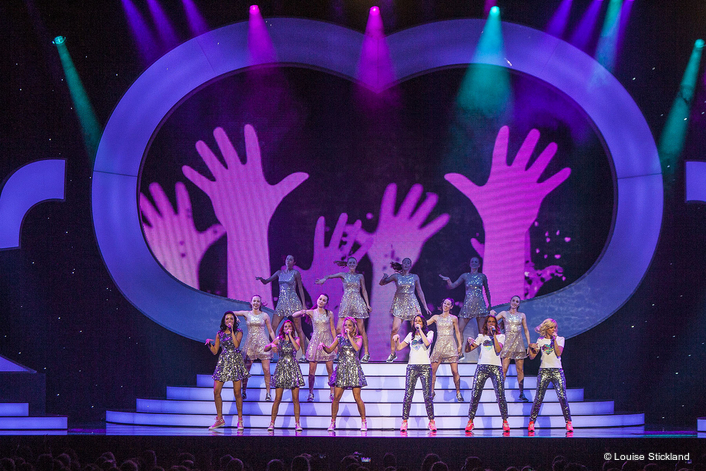 “The Strikes replaced my traditional blinder fixtures,” explained Luc. “As the girls have a lot of interaction with the audience during the performance, the Strike 4s provided perfect audience ‘blinding’ when required for the back and forth dialogue.”

He adds that the Strike 4 offers many extra possibilities over and above conventional audience blinders, “They bring an extra dimension to the overall look of the stage, and with each cell individually controllable there are many possibilities for the lighting design as a whole. I also like using the strobe feature and there are plenty of different looks to play with.” 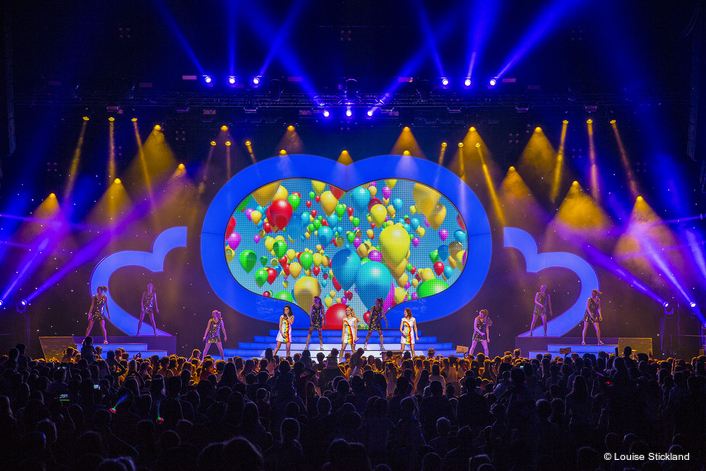 Two Concept Vi-Count hazers were also run by Niels via his grandMA2 full size console, supplied to the production by Painting with Light.

“It’s always great fun working on K3 shows,” says Luc. “Studio 100 is committed to providing excellent production values and we really enjoy being part of something which is a lot of young people’s introduction to live performance. This tour was especially interesting and a departure from previous ones, moving K3 into a new era, and we are all looking forward to the future”.