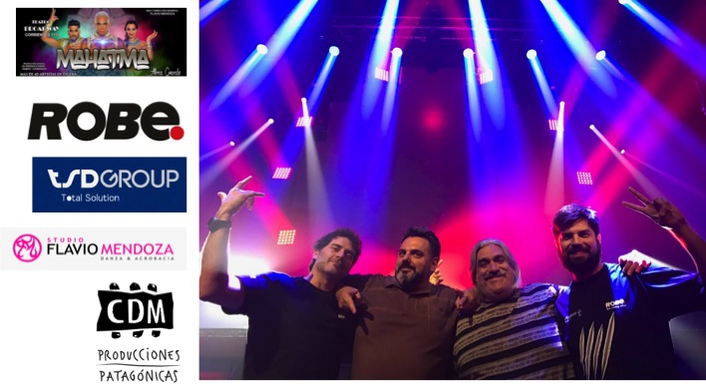 Award winning Argentinian lighting designer Ariel del Mastro was asked to add his own touches of lighting inspiration to latest thrilling stage show created by renowned  choreographer / producer Flavio Mendoza, “Mahatma”, which played the summer season at the Luxor Theatre in Villa Carlos Paz, Cordoba and has now transferred to the Teatro Broadway in Buenos Aires.

The show is Indian influenced, featuring a unique blend of exuberant and reflective music and dance capturing the humour, colour, diversity and wisdom of the culture in a vibrant and animated performance … for which Ariel chose Robe moving lights as his principal fixtures.

Fourteen Spikies, 18 Spiiders and 16 Squares were on the rig at the Luxor – the first time all of these new fixtures made their theatrical debut in Argentina!

The big challenge in lighting the show said Ariel … was to capture the many emotions and expressions, for which he needed some truly versatile lighting options.

A large amount of LED screen upstage also dictated that bright luminaires should be used that would cut through the high ambient light levels onstage. Added to this, several moving scenery pieces come in and out throughout, so lighting on the performers additionally needs to be fine-tuned to avoid shadows or other surprises or obstructions!

Flavio Mendoza himself was also keen to use the latest technologies on his show. 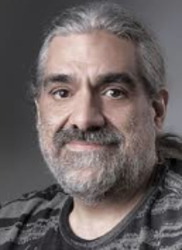 When Ariel first saw the Spiiders a month after their launch at LDI 2016, they were a must-have for the lighting plot, together with Spikies and Squares which he also saw for the first time at that same trade show.

He came back from Las Vegas enthusing to Flavio, and when CDM Productions from Buenos Aires was appointed as Mahatma’s technical supplier they made the investment in the new Spiiders, Spikies and Squares, which were supplied by Robe’s Argentinian distributor, TSD.

Seeing them at LDI was one thing, but when Ariel actually got them in front of him at the warehouse for the first time, he realised how much more creative he could be overall. He likes the “clear and precise colours and the large zoom” which allow him to create different spaces onstage and help develop the mood of each different segment.

The Spiider’s are all in the overhead rig. They offer multiple options both as a standard wash beam and for effects, helping to create the different environments and deepen the texture of the stage as a performance space.

Ariel originally intended to use Squares primarily at the back, so they could be programmed or mapped into patterns and shapes, but the power, the zoom function and the quality of the colour range led him to move some to the side boom positions. With up to 40 artists on the stage at times, this has been a real boost to the cross-stage coverage capabilities.

The Spikies were mounted at the back in between the screens with the intention of having a narrow beam emanating from the edges of the screen, giving a three dimensional element and some aerial movement coming in from behind cutting through the light coming off the screen.

Ariel first saw Robe a decade ago at LDI in 2007. He remembers the occasion clearly and commented to those around him at the time … that Robe was a brand-to-watch!

A lot has happened in those 10 years, but he now maintains, without hesitation, that Robe is “The main player right now”. Observing also that there are many others chasing that top position, he adds, “I really hope Robe can keep the innovative edge and the leadership it commands right now”. 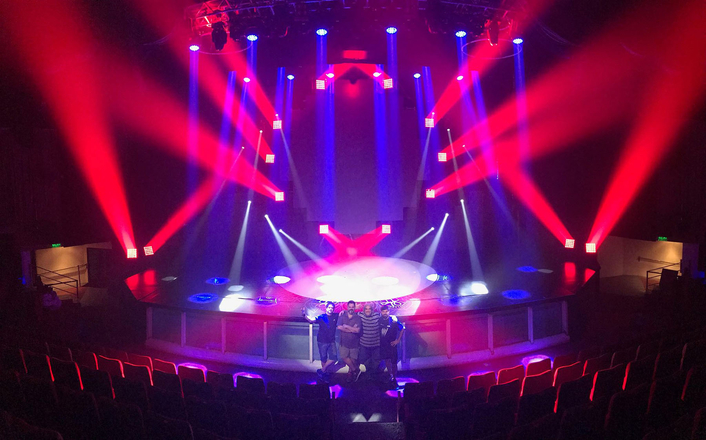 Ariel del Mastro was born into the entertainment industry and his passion for lighting was energised when he was a teenager on tour with his mother, famous Argentinian singer, songwriter, dancer and actress, Nacha Guevara.

One evening, the follow spot operator failed to show up … so young Ariel stepped up to the plate … and hasn’t looked back.

His long and lively career has seen him establish himself as one of the most experienced theatrical, performance and dance lighting designers in Argentina. He’s also owned and run a successful rental company, set up when none of the existing ones could supply the kit he wanted. Through this, he serviced a host of international companies and artists performing in Argentina.

In 2001 he sold the rental company and focussed on being an LD and designer. Work has included several high profile Disney productions like Beauty and the Beast for which he designed lighting throughout Latin America and Europe, winning many international awards and distinctions.

In the last year he’s been involved in the design, set up, technical direction and / or artistic direction of plays like Stravaganza (also for Flavio Mendoza), Peter Pan, the musical Franciscus, Cinderella and many more