BALS Gets To the Pointe with Robe 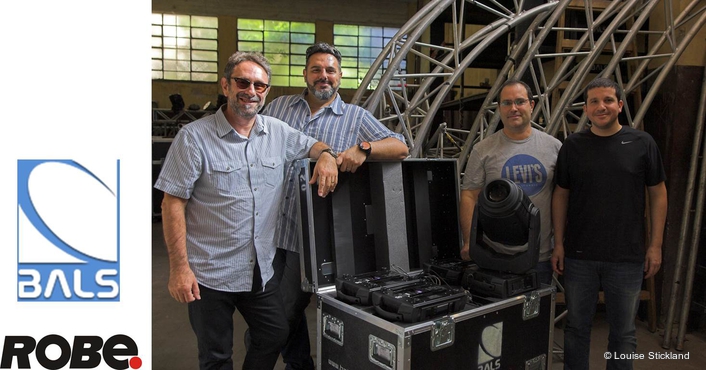 The company was founded in 1992 and occupies a large warehouse space in the Caseros area of Buenos Aires city, with around 17 full time employees at the moment and around 40 regular freelance technicians and engineers.

BALS also works in other parts of Latin America, most notably Paraguay and Uruguay, and they service the technical requirements worldwide for acclaimed live art / performance troupe Fuerza Bruta. They supply around 200 shows / tours / projects a year and also look after some high profile installations including the busy Teatro Coliseo in Buenos Aires.

Robe’s reporting team caught up with BALS during the busy end-of-year season, and spoke to Technical Services Manager Daniel Bordino about the decision to invest in the brand.

They were looking to buy a beam fixture, he explains, and it came down to two options – Robe or a competitor product.

They have noticed Pointes appearing with increasing frequency on riders over the last year … and in fact had been cross-renting them on several occasions. Pointes were also highly recommended by several lighting professionals they work with regularly, and the time seemed right to check out what is rapidly becoming … everyone’s must-have moving beam light!

As soon as Daniel and his colleagues, BALS CEO Federico Sainz and Commercial Manager Hugo Mossi, actually saw the Pointes in action during a demo, they made their decision! The fixtures were delivered by Robe’s Argentinian distributor, TSD Group shortly after.

The fact that TSD had stock at the time was just as well, as the 12 units went straight out on a job the day they were delivered … and have not stopped working since! They have been part of the lighting rig for Spanish punk outfit Ska-P, Grammy-Award winning Spanish pop singer & songwriter David Bisbal among many others.

“This is, of course, what all hire companies want!” says Daniel. “The Pointes are far more versatile, multi-functional and high impact than the other product we were considering, and it’s been a great decision!”

They are all impressed with the “Amazing” brightness and sheer output of the Pointe and also with the robust mechanics and overall construction and reliability.

They also commented on the wide range of console personalities available free from Robe, an element that TSD took care of ensuring was supplied together with the lights.

Apart from being in-demand products, also important in the decision to buy was the after-sales and technical support they can expects from TSD Group. “TSD are definitely taking care of the brand properly,” comments Daniel Bordino, adding that as a company, BALS has enjoyed an excellent and proactive working relationship with TSD for many years.