HSL Enjoys One Hell of a Nite with Chris Brown 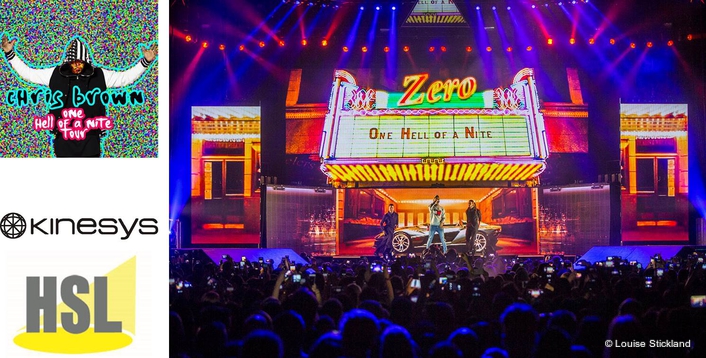 HSL supplied lighting, rigging and a Kinesys automation system for the recent European leg of Chris Brown’s “One Hell of a Nite” tour, working for production designer and manager Tom E. Marzullo from Out Of Our Minds Creative Services, LLC.

HSL project managers John Slevin and Jordan Hanson co-ordinated everything for the Blackburn UK based rental company and ensured that the production design - created collectively by Tom E with input from Christie Lites’ Robert Roth and Robert Achlimbari from All Access - was supplied with all the lighting, rigging and automation elements it needed.

The tour’s technical director Brian Spett who ran video content for the show and lighting director Charles Ford (also the lighting programmer / operator) additionally had their input, while HSL supplied a top crew chiefed by Simon “Piggy” Lynch, to ensure that everything ran as smoothly and seamlessly on the road for a gruelling three and a half week schedule. 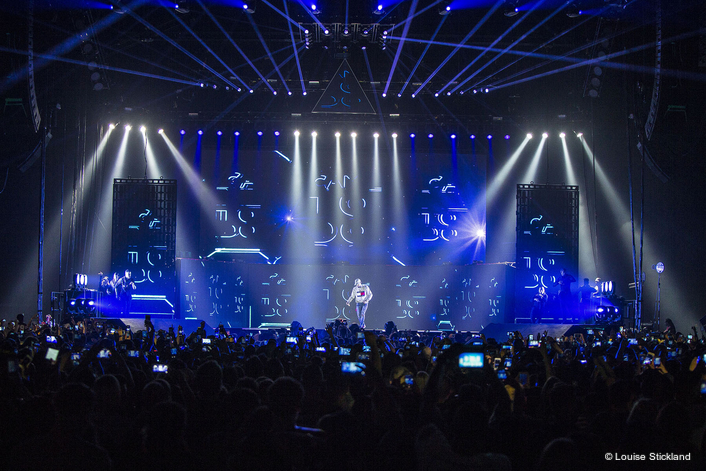 This design was actually the third iteration of the original tour concept that started in 2015, however structurally it was quite different to anything that had been done before and also included a lot of new video content.

“We were hugely honoured to be working with a production director of Tom E’s calibre and his talented team,” commented HSL’s MD Simon Stuart. “The tour was invigorating and visually exciting, and although with 12 trucks it was good sized production … those involved also maximised all elements to go a long way applying imagination and thought!”

The stage design was based around four onstage sections of 8 and 9 mm LED video screen, a multi-level stage deck and several lighting trusses overhead and running down the sides of the space.

HSL supplied all the necessary trussing for lighting, and rigging for lighting and video which included over 100 motors. The production riggers were Tom Cusimano and Billy Daves Jnr.

Lighting was rigged on eight overhead trusses and two moving pods. The pods each measured 3 x 3 metres, one downstage above the B-stage and one mid-stage, both populated with a 6 x 6 grid of Elation SIXPAR 200s – with the RGBAW+UV LEDs - purchased specially by HSL for the tour and 16 x Clay Paky Sharpies around the perimeter of each pod.

These both moved in and out at different points in the show – sometimes to within millimetres of the star’s head, adding drama and depth to the stage – ideal for closing down the space for the moody moments.

Brian Spett was really impressed with the SIXPAR 200s … with 36 sources per pod, he liked their nice fat beams and the intensity of the UV, traditionally a difficult colour for LED sources to reproduce.

Martin Vipers were positioned on the downstage truss used for key lighting on Chris Brown and the dancers – the show was masterfully choreographed by Rich and Tone Talauega - and for aerial effects. 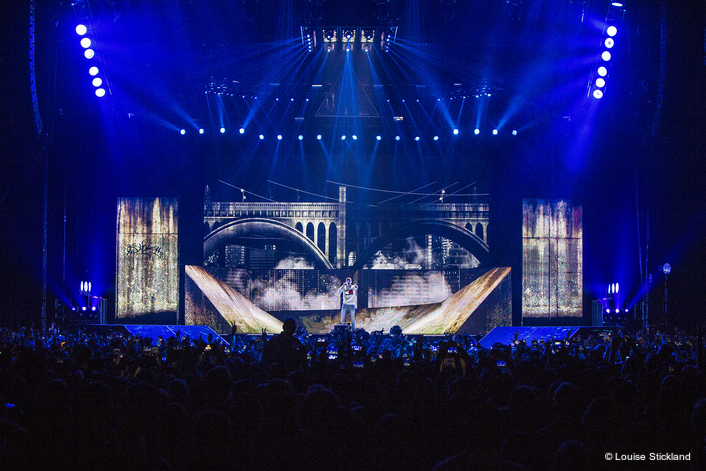 Other spot and beam moving lights on the rig included Clay Paky Mythos and Sharpies, with 68 Sharpies in the show – including 32 framing the pods.

Six Mythos were positioned on the floor. Being such a versatile ‘hybrid’ lightsource, six “went a long way” comments Brian.

Forty-six Robe LEDWash 1200s were dotted around on the various over-stage and side trusses and these formed the base stage and set washes for show and key lighting for the dancers and Chris Brown himself.

The LEDWashes were the real workhorses of the lighting rig. Running in ‘wide’ mode with some intricate programming they were able to create complex and funky effects.

Chris Brown himself made a bold decision at the start of the tour not to use any follow spots which brought a more dynamic and edgy ambience to the stage. 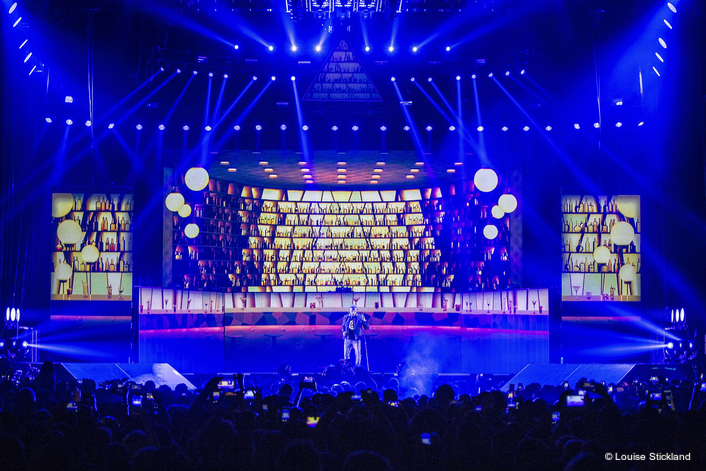 Sixteen Atomic strobes were scattered around in the air on the mid and upstage trusses and 24 x well maintained Martin MAC 2K XBs held their own on the upstage truss. The lighting count was completed with 16 x 4-lite Moles.

Brian – who triggered the d3 4x4 Pro media servers running the playback video from a grandMA2 full size console - explained that he and Charles Ford who operated the lighting using another grandMA2 light – both worked very hard to ensure there was plenty of definition in the show.

“There were enough different types of light to make it versatile but not so many that it turned into a mush,” commented Brian.

A third grandMA2 full size was provided by HSL as an onstage technical desk for the crew. 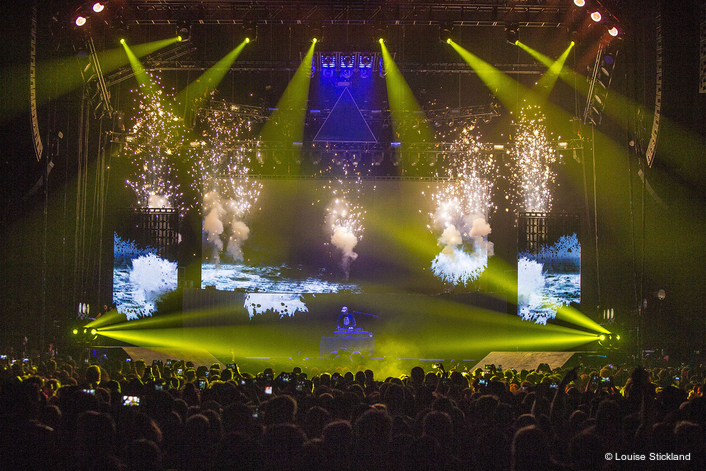 Both lighting and video content was run by a combination of timecode from the ProTools rig and manual operation.

Brian said that working with HSL had been “Brilliant! The equipment is very well looked after, and they brought quality, a great crew and attitude and plenty of experience to the equation”.

Joining Simon “Piggy” Lynch on the HSL crew was Simon Anderson on dimmers and technician Dan Cloake. Ian Tucker from Christie Lights worked on the touring crew bringing continuity from the US sections of the tour and Bobby Braccia from the production worked with HSL in Blackburn on prepping the rig ahead of the European production rehearsals at LH2.

Charles Ford originally became involved in the Chris Brown touring production as LD for Trey Songz for the co-headline leg with him and Chris Brown in 2015, continuing with Chris Brown’s own production for this third ‘One Hell of a Nite’ section. Lighting director and programmer for the first leg earlier in 2015 was Bryan Hartley. 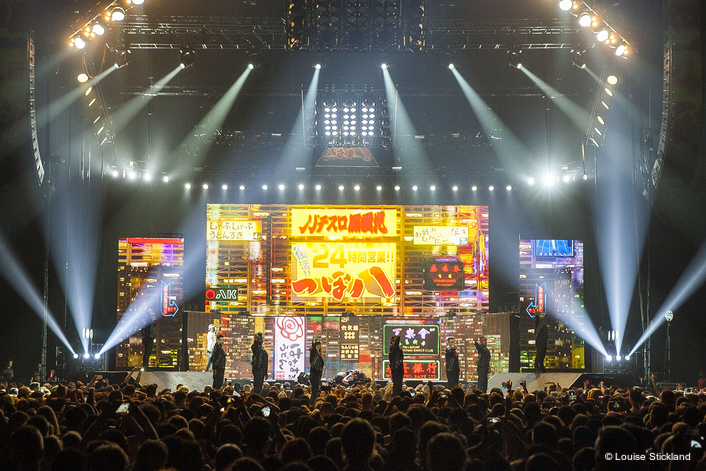 Video content – which brought fun, depth and a distinct edginess to the show visuals – was created by Possible Productions and LPX Digital, with animations by Jaime Lopez for LPX Digital. The 5-camera IMAG mix was directed by Richard Parkin with video hardware co-ordinated by US-based BTV Touring Video.

Sound was supplied by Eighth Day, another one of Tom E.’s regular production partners, and Strictly FX delivered the pyro with trucking by Transam.

Tom E commented that it was good to be working with HSL. “They have a great attitude, they really came to the party in every way … and it was excellent to have them on the tour.”