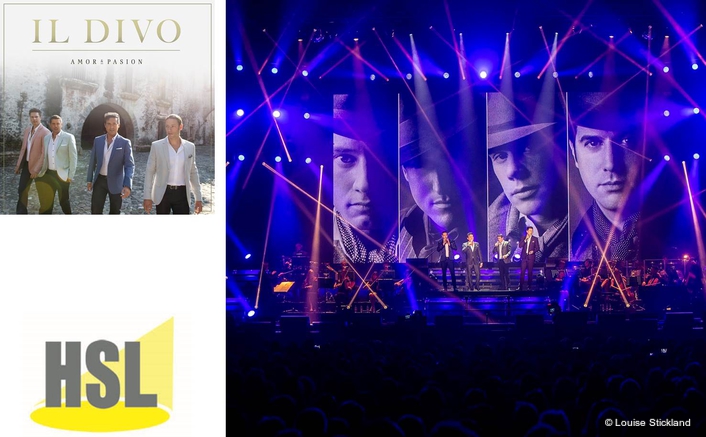 The project is being managed for HSL by Andy Chatburn – he and Dan enjoy a great working relationship and Andy is also co-ordinating the Russell Watson tour also featuring a design by Dan.

Dancers on this tour bring a completely new and fresh dynamic to the Il Divo live equation which also includes an 18 piece orchestra and a large upstage LED screen. All of these define aspects of how Dan has lit the show, making it sexy, sultry and edgier than any previously.

Other influences on the design were the fact that the first legs of the tour in South America  and Asia were all fly-ins utilising local production, and it was only when they arrived in Japan did they meet the first full production rig.

Ahead of the tour, Dan chatted with the band, video director Dylan Etherington and chorographer Zenon Recalde, and together they evolved the visual presentation concept that we are seeing in Europe.

As well as creating a bit of sexiness and mystery to carry along the Latin theme, it was also about making the space intimate so Il Divo could communicate almost on a one-to-one with their audience. Dan was adamant that the LED screen at the back blended into the picture rather than dominated the look to create depth and balance in the theatrical scene.

While widening out the whole stage space with lighting throws the energy right out into the far corners of the room and involves everyone in the show, he also works hard to create balance for the IMAG cameras and their images which appear on the two large side projection screens. 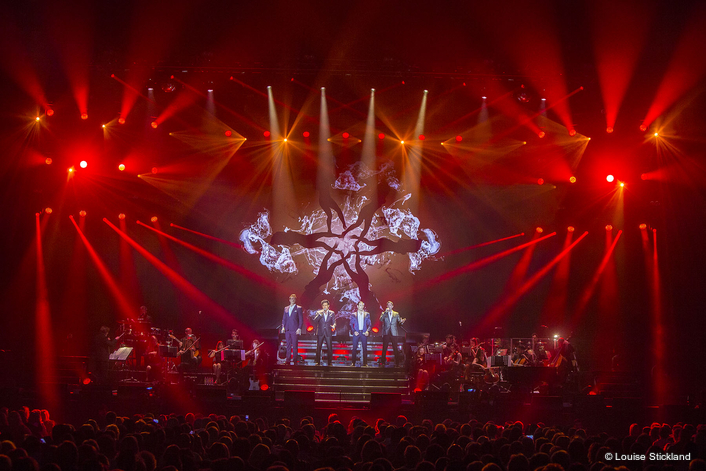 The need to make the band the main focus in a balanced picture was based on the demographic of the audience for this type of act and production.

The whole design is based on using pre-rigged trussing which is essential in keeping the load-ins and outs to a sensible time-frame and keeping the crew as fresh as possible. There are six diagonally hung side trusses (3 per side beneath one another) and three overheads – front, middle and back.

“The design concept was to frame the large upstage LED screen with lighting fixtures in a way that widened the vista, formed layered looks to create depth in the picture with the LED screen as a moving theatrical backdrop within that picture,” explained Dan.

The new presentation with the dancers required a front truss – something Dan has not used on previous Il Divo tours - and on this are 12 of the 19 x Martin MAC Viper DX Washes. The barn-door modules enable really precise framing.

Twenty Viper Profiles are in action on this version of the rig, four of which are for exclusive back-lighting and highlighting the four singers with the rest used for beam work or to twinkle in the audiences eyes, creating energy in the room without blinding them!

Robe Pointes have been spec’d for effects and eye-candy looks with 12 on the deck and 18 in the air on the top truss and lower side trusses to produce low ACL style finger-of-light looks. It was the first time that Dan had used these and he’s made the most of the wide gobo range.

The large quantity of new Aura XBs are used to create grids of lights either side of stage with a long line across the top side truss and another line across the floor at the back. Dan thinks they are “phenomenal” for their punch from such a small fixture. “They’re so bright that you don’t really need a large wash any more when pointing towards the audience, even in an arena … and six fit into a really small neat box!” 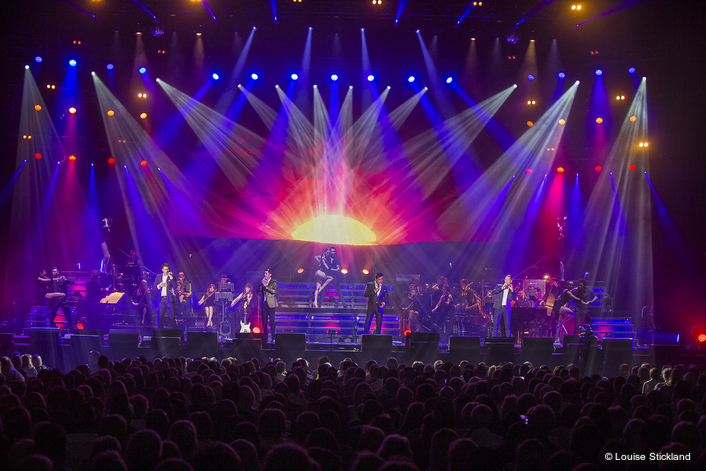 The excellent narrow beam of the Aura XBs is helping extend the stage and there are some more XBs inserted beneath the open-tread stairs centre stage to remove the black holes in the set design.

Also on the floor are two rows of Philips SL- eStrip LED battens positioned on the back of the orchestra risers for up lighting the backdrop area to create silhouettes of the orchestra.

When it came to general orchestra lighting, Dan was adamant about wanting one specific fixture for the job … and that was the Vari*Lite V*L1000 TSs.

Four on the front truss and four on the mid give that beautifully rich genuine tungsten glow he wanted – in a moving fixture chosen for the speed and efficiency of daily focussing. “You just can’t replicate this quality of light using arc or LED fixtures even with CTO filtering!” he explains.

Following on, HSL is now seeing a demand for this type of fixture particularly in TV markets, and has just purchased 50 x V*L 1100 TSDs for their busy rental department!

Apart from giving that essential tungsten,    these lights subtly helped the dimensional separation between the orchestra and the rest of the stage. The shuttering again enabled Dan to be spot on in the focus without having to send crew up on trusses. 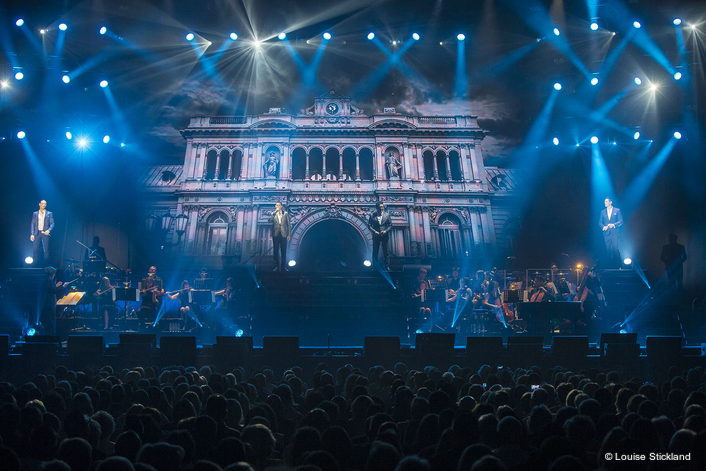 Five 4-lite Moles were used on the front truss to highlight the audience with a further 18 x 2-lites as effects light for some of the large production numbers punctuating  the set, all adding to the Latino sparkiness and adding another texture of light to contrast with the LED and HMI sources.

Atmosphere was vital to making this lightshow work and this was provided by four DF50 machines each with an AF1 fan - the best, most consistent and long-lingering haze for this type of show environment Dan reckons.

All the lighting was controlled via the new grandMA2 full size with a light running as backup. This was spec’d because it’s possible to get a grandMA2 almost everywhere in the world which is vital with a tour performing from Paraguay to The Philippines. Dan himself has operated for most of the tour, with Daniel Richardson coming on board as operator for some shows which he has to miss due to other commitments.

The crew from HSL are chief Steve ‘Stona’ Rusling, Brendon Swanton on dimmers and technicians Andy Mitchinson and Tim Spilman. Andy ‘Paris’ Hilton is the production rigger for the UK and Europe.

Dan concludes, “It’s been a fantastic tour right through – the production and aesthetics have been really successful. Working with HSL as always has been brilliant, especially the fact that they were prepared to invest in the new kit and ensure I had exactly what I needed!” 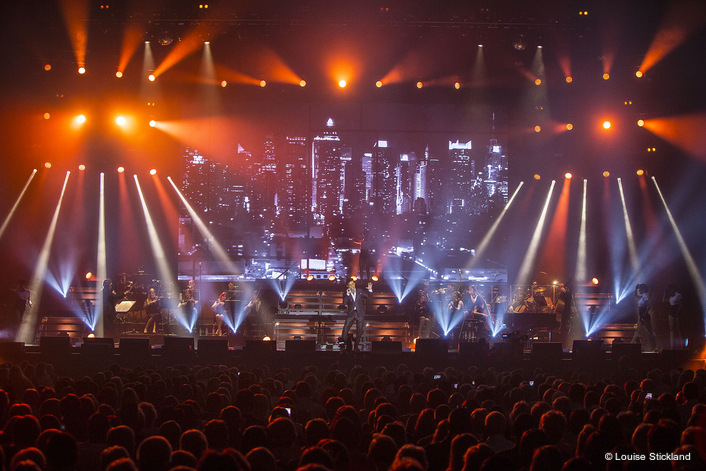