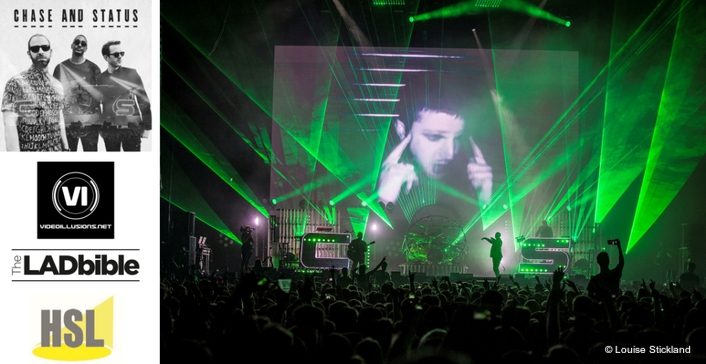 Chase & Status treated fans to a fix of their hugely exciting genre of live performance in a short end of year tour which revealed snapshots of material from their forthcoming fourth studio album – due for release in 2017 - as well as belting out some of their classics to the delight of all.

Lighting and set designer Andy Hurst faced the challenge of designing A, B and C variations of a rig that would fit into a selection of Academies plus a sold-out show at London’s Ally Pally, where they raised the roof delivering a full-throttle collage of music and visual presentation matching their intense energy and attitude.

HSL supplied all the lighting equipment, associated rigging and crew. 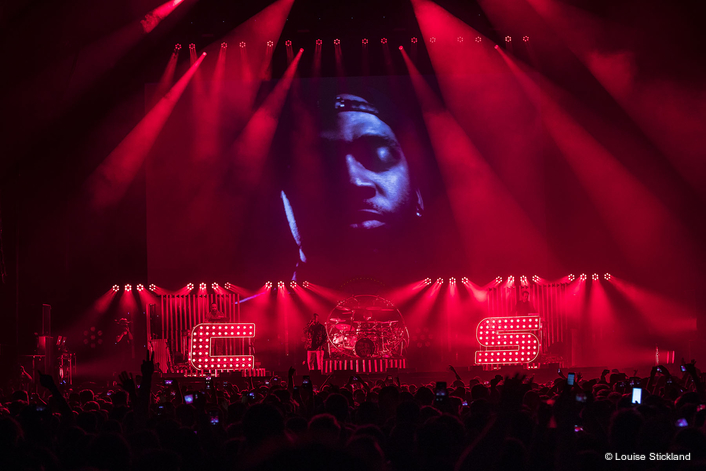 Andy's design retained some threads from previous live campaigns - like the large Scenic C and S letters, which he's had reworked and converted to LED - together with popular elements  from their 2016 festival shows like the two Sceptron pods around Saul Milton (Chase) and Will Kennard (Status), as well as adding some new surprises.

One of the starting points was the band’s requirement for a large upstage screen to highlight their various vocalist collaborations – Plan B, Delilah and others appeared onstage via the screen! Although they can’t all be there in person, it's important they have a big presence onstage.

"It was a considered combination of existing ‘givens’ and fresh ideas that fitted the budget and a week of dates at varying sized venues," explained Andy, who also designed and specified a selection of DMX controlled lasers for the show as well as having input into reworking some of the playback video content. 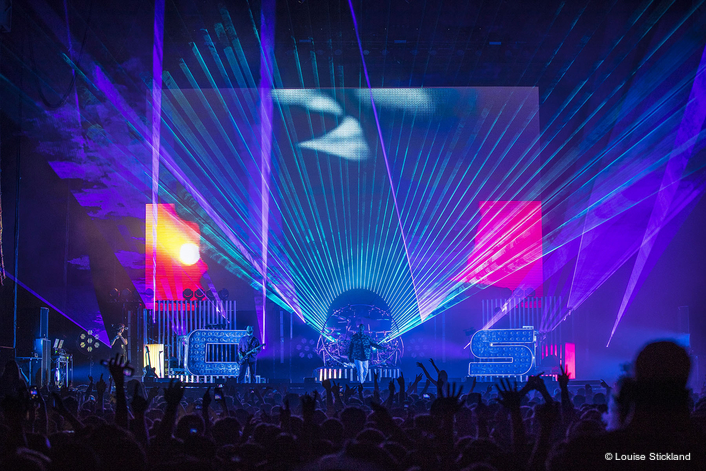 There were no production rehearsals, they loaded straight into Glasgow Academy and did the first show, so everything was visualized on WYSIWYG, adding more pressure.

Andy also chose the 6mm pitch LED which was supplied along with the rest of the video package by Video Illusions.

Onstage, the two main scenic pieces were the two ‘Sceptron Pods’ made up from 112 x 1 metre VDO Sceptron 10 LED strips from Martin by Harman, and 30 of the 300 mm versions, which were attached to a scaffolding framework forming the back and sides of the pods. They were framed by a curved front riser, and fed the same playback video footage going to the main screen – via an AI server - for visual continuity.

New specials for this tour included eight Portman P1 lights, a funky retro styled fixture featuring seven P1 lightsources in a flower like appearance, adding a bold and distinctive scenic flourish to the stage. Each of the seven cells can be controlled individually so they can be mapped. HSL purchased them especially for the tour and Andy reckons this could be a ‘first’ for the luminaires which are crafted ‘with love’ in Gdansk, Poland. 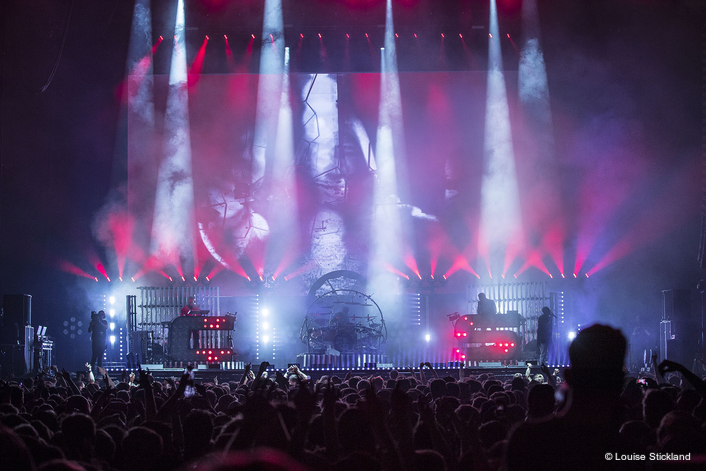 Maintaining a multi layered theme on the visuals – the show is fast-and-furious – is one of the tricks Andy has learnt through experience and working with Chase & Status and other ‘full-tilt’ artists like The Prodigy – is that you have to keep revealing WOW factors right through the show … not just in the first 10 minutes!

Upstage he positioned six floor-based tower trusses, each loaded with four vertical Robe CycFX 8s on the front fascia, four Philips RGB Nitro strobes in a line, four GLP X4 Ss in a row on the top and, outrigged to baby arms, two Beamburst 3 lasers per tower. These fixtures alone offered a multitude of effects working either singly or in numerous combinations.

There were 80 x GLP X4S LED moving lights on the rig in total, with the other 56 spread out on three over-stage trusses together with 12 x MAC Vipers and 16 x RGB Nitro strobes plus a load of Moles.

More Robe CycFX 8s were used in the footlights position along the stage lip to create a wall of light effect, looking very cool when combined with haze and smoke. 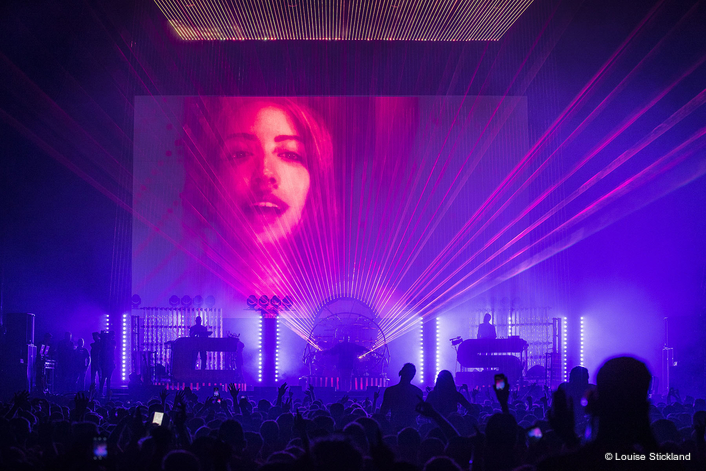 More Nitros were arranged in clusters below the risers - which had Perspex tops - and used as wash fixtures to creating intense blasts of light onto the artists. Andy – who was also one of the first LDs to use these on a rock show with The Prodigy a few years ago says, "They have lots of Macro tricks and are generally excellent and flexible fixtures".

For floor key lights three Robe LEDWash 1200s a side were positioned downstage, with one more on both the C and the S to light drummer Andy Gangadeen properly.

Additional lasers specified by Andy and delivered by ER included a Cyclone behind the drummer, which is a proprietary 2 metre diameter circle with 60 individual lasers that rotates like Catherine Wheel. It looked funky and surreal, and with some clever illusionist style lighting, like it was floating in thin air!

Andy was the first person to use this product in a live show - for Pendulum at Ultra Miami this year - and at Ally Pally it provided an off-beat visual touch in the final third of the set. 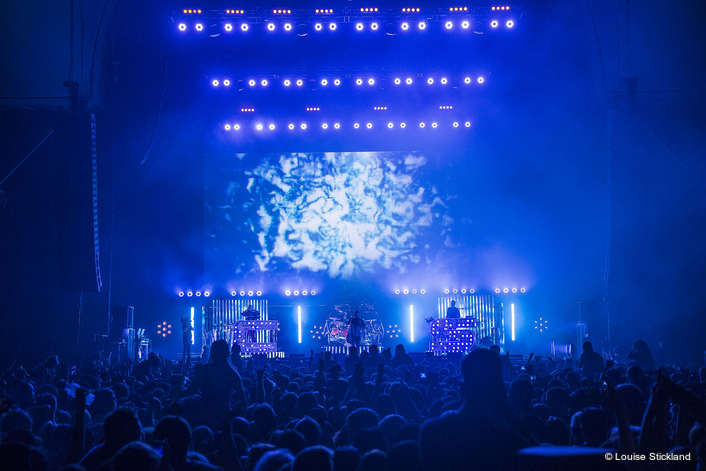 Camera director was Dave Whiteoak from Video Illusions and for Ally Pally, side screens were added and the show was also live streamed on LADbible. As well as looking amazing, another fantastic sounding Chase & Status show was FOH engineered by Rampton with Mikey Poole on monitors. 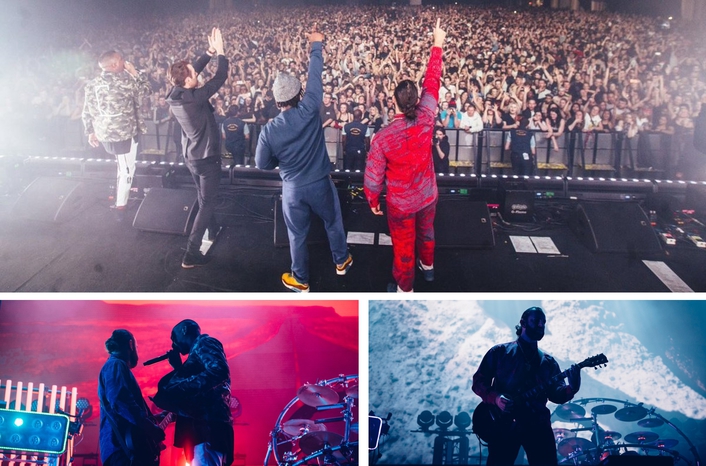 HSL supplied all the lighting equipment, associated rigging and crew