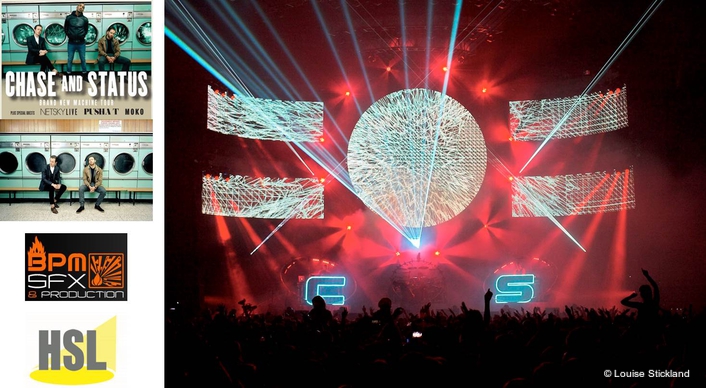 It’s Hurst’s – well known for this creative flare, imagination and fusion of lighting and visuals mediums into his designs – first work with Chase & Status, among the UK’s most innovative electronic mixmasters.

It is also the first time they have played arena venues on a full tour – bringing  the edge and excitement of their legendary performance oeuvre together with the technical  refinement and scale needed to be practical on a tour. 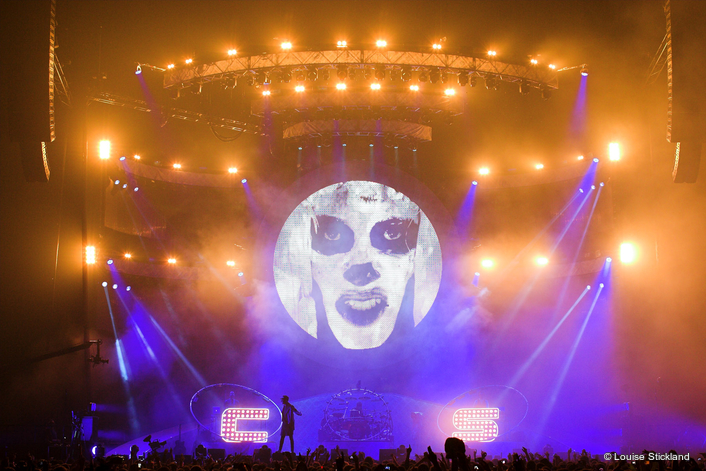 HSL, the award winning Blackburn, UK based lighting and visuals rental company has supplied Chase & Status with equipment right from the start of their touring career, and Production Manager Michael Clegg once again sourced all lighting and LED screens from the company, where they were looked after by Project Manager, Mike Oates.

The design involved over 150 moving lights plus substantial quantities of  Martin LC and EC LED screen.

Hurst’s starting point for the stage aesthetics was that the ‘Brand New Machine’ album featured a slightly more clubby and commercial sound than their previous works of more hardcore drum ‘n’ bass … so he created a contemporary look to the stage but laced it with throw-backs to the most specular classic retro elements of the 1990’s dance scene.

“Everything was very circular and spherical orientated back then,” he explains, “So that’s the base geometry I introduced to the stage. As it was their first arena size tour with full production, my aim was for a BIG look with high impact moments, but something that could also easily be broken down during quieter interludes – basically something with massive power and many potential contrasts!”

The set provided a large curved walkway upstage of the band and in front of this they were all positioned on circular risers. 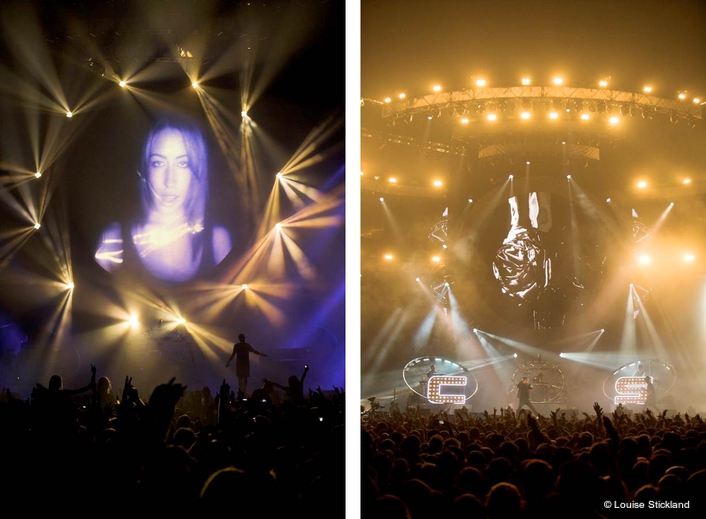 Upstage centre was a large scenic flown circle - made from an 8 metre diameter truss clad with special printed front masking panels (from Hangman, together with all the draping and the hoops for the C&S letters – see below) - and the middle filled with HSL’s Martin EC 20 mm screen.

To either side of this on two levels were two curved 7 metre wide hangs of Martin LC40 LED product.

All the lighting trusses – seven in total over the stage - were also spherical in shape.

Down on the stage, the band’s two familiar internally lit ‘C’ and “S’ set props were also augmented with custom made silver hoops to align them with the new ‘vibe’ of the stage, and Hurst also had them edged in LED tape, a simple visual trick which worked extremely well.

One of the most essential requirements for any C&S show is to keep the huge energy of the band pumping full-on throughout and reaching it right out into the audience with the lighting – lots of big beamy looks enveloping the fans and pulling them into the action.

For getting absolutely max dynamics, Hurst spread lighting fixtures out over all the large selection of trusses.

Several beam fixtures were utilized as they were ideal for the fast, punchy, flashy style that Hurst adopted for the show, with 64 x Robe LEDBeam 100s hung below the side video screens for the main wash and effects lights; plus 34 x Clay Paky Sharpies  dotted all around, for the primary beam lights. 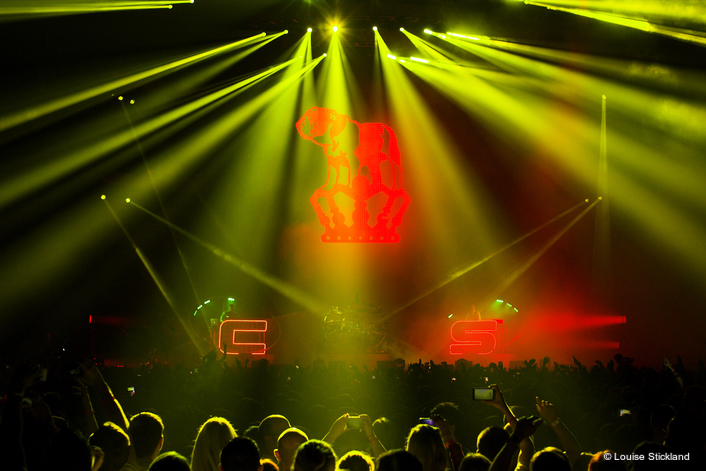 Around the central circle were 12 x Martin MAC Vipers fitted with air-fx Quadrays,   which produced some highly visible psychedelic retro style break up effects but with their own unique look… and plenty of WOW factors to go with this!
Forty Atomic strobes were scattered ‘randomly’ around the rig including the circle and also behind the side hangs of screen so they could blast through, revealing the industrial look of the mesh – very C&S!

It goes without saying that the set was shot through with numerous strobe-tastic moments to everyone’s delight! Four Solaris flare strobes produced some interesting and different floor washes.

Lasers and pyro were supplied by BPM and content for all the screens was supplied by Immersive.

Hurst ran the lighting from a Hog Full Boar console with a Wing and a fully redundant backup system – one of the major hazards of the show being punters showing their appreciation by enthusiastically chucking beer in all directions … including at FOH!

HSL supplied one of their top crews to support Hurst for the tour which had an intense schedule and only one day of rehearsal – Crew Chief by Simon ‘Piggy’ Lynch was, joined by Jason Dixon, Mark Callaghan, Jake Jeavons and Jack Gambino who, Hurst comments, “Were all amazing”.