Hands in the Air for Hair! 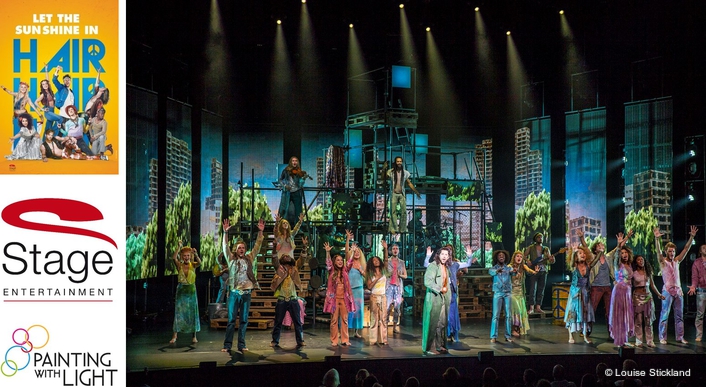 Set in New York during the Vietnam War era in the midst of hippie counterculture, the sexual revolution and mind-expanding drug experimentalism ... the storyline touches multiple race and class issues and asks leading and rhetorical questions about the futility of war and violence which are still as relevant today as they were 40 years ago!

These historically significant markers all provided multiple layers of rich visual material for Luc Peumans and his team which included associate and video content producer Michael Al Far to work with.

The production united the same creative team with whom Luc worked on 2015 hit 'The Bodyguard', and Painting with Light was also selected because they could supply an integrated lighting and video design package which worked both creatively and commercially, offering good continuity between the two mediums.

It is a two truck tour so the basic design elements factored in this logistic, and Carla Janssen-Höfelt created the scaffolding-based set design to bring a temporary pop-up feel in a rapidly changing world with little stability and often no palpable rhyme or reason!

As the initial storyline was evolved, Carla produced a set of guidelines for video content and how that should relate to the overall narrative. The street art style of the footage underlined these, also emplacing the shifting, itinerant nature of the piece and subtly reinforcing the many scenic and locational references – both real and hallucinogenic! 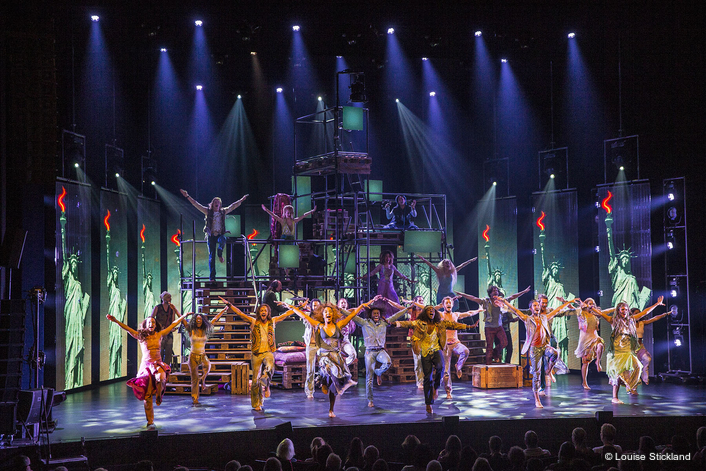 Painting with Light recruited a team of three video artists to assist this intensive process and they created all the basic drawings like the skyline, parks, etc., which were used as a template to create more detailed content essential to the digital scenery. Once the raw content and ideas had the green light, additional treatment and fine-tuning completed the process.

"It was great fun to work with the artists and a great collective effort," comments Luc, adding that one of their priorities was to ensure that content was not too busy as there was already so many other visual elements happening onstage throughout the show.

The 10 x 4 metre high screens are made up from 10 mm Glux LED product, chosen by Luc and Michael for its light weight and adaptability, ideal for touring. These are all on separate house fly bars in the theatre and move subtly through the show.

Embedded in the scaffolding set structure are 16 panels of 3.9 mm Unilumen screen product - all the LED is supplied by CT. These are used as video driven lightsources as well as taking supporting scenic content.

A Barco SLM R9+ video projector is used to project onto the cast at the end of the show and onto a front gauze during the interval.

All the content is run through one of Painting with Light’s Pandora's Box media servers, programmed by their video control specialist, Katleen Selleslagh. 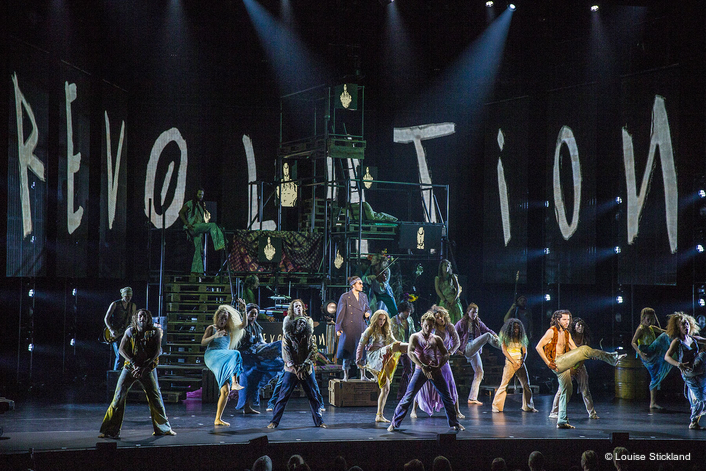 Luc wanted the lighting aesthetic to be harsh with plenty of contrasts, dark and light areas, different directions and strategically deployed side light which always creates atmosphere.

He chose a ‘direction’ for the lighting in every scene, and the moods ranged from intimate, minimal and stark to larger and more colourful for the big production numbers with the full cast onstage.

Six side towers are positioned in between the screens, loaded with a total of 56 x LED wash lights which are invaluable for focusing light into the tighter parts of the set. URC Ledzoom 210 washes – a proprietary product made for lighting supplier Phlippo Showlight -   are rigged above the set and on the theatre's portals for illuminating the scaffolding.

Twenty Martin MAC Quantum profiles are fitted with two different custom breakup gobos that were designed by Luc especially for Hair to satisfy the need for a very specific textured look that he wanted to create.

Five MAC Viper Performances - with the shutter module - are rigged to the theatre portal and used for all the specials and key lighting.

URC Citywash LED floods also illuminate the scaffolding all around the sides and back and in the floor. 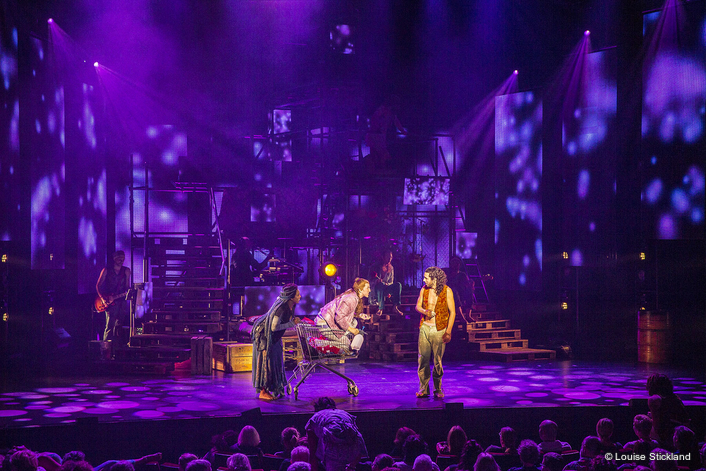 Fourteen Chauvet Strike 1 single pod white blinders - which have a great tungsten red shift giving a vintage look - are distributed around the towers with one concealed in the coffin for the end scene. This is the only time they are used … as main character Berger searches for the other main protagonist, Claude … and opens the coffin, then the chorus come in and start a reprise of "Let the Sun Shine In".

High up on the scaffolding is an original 1000W Strand Beamlight which is used throughout the set and is integral to the audience interaction when it's moved around by various cast members. "I really like the warm quality and shape of the light" comments Luc “it's used as an ‘interpreter’ and also for the search scenes”. 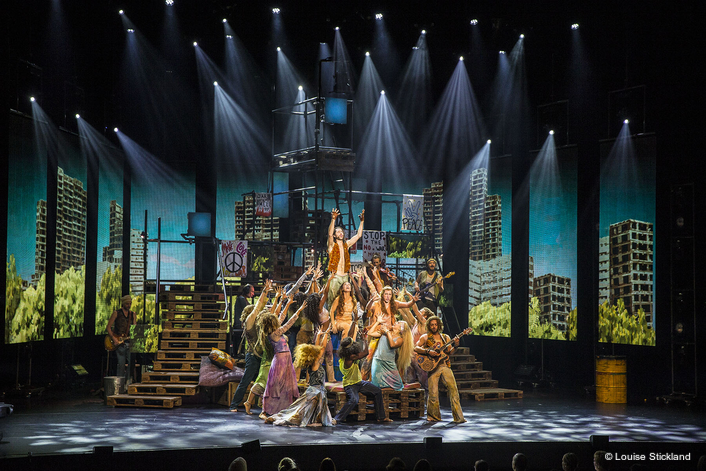 Some Chauvet COLORDash Accent LED fixtures - a small birdie-like fixture - are dotted around the set and used to light the band.

The lighting picture is completed with two follow spots which are installed in the FOH positions.

A grandMA2 light console programmed by Jeroen Opsteyn and operated on the road by Bryan van Beek is running lighting and triggering the video cues.

Luc has really enjoyed working as part of an “excellent and highly creative team with a great chemistry between all of us". 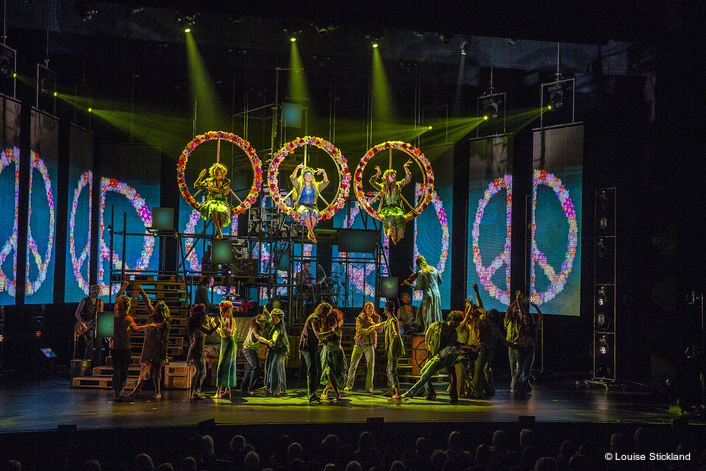 The big challenge was to preserve a period feel to the work respecting the historical significance especially for those seeing it who were original Hair fans, but also helping to make it relevant and contemporary for younger audiences seeing it for the first time ... which meant some very specific styling.

So far, it’s been a big hit and is currently scheduled to tour until April 2017.