Clouseau Dances for Painting with Light 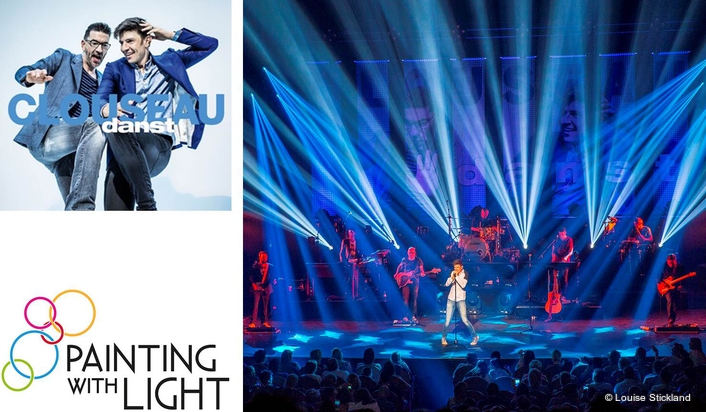 Clouseau, Belgium’s maverick and most successful pop / rock band are back on the road this summer with a new album "Clouseau Danst" (Clouseau Dances); a new sonic dynamic with the addition of a four-piece horn section; plus a vibrant new set and lighting design from leading European creative design practice, Painting with Light.

The production design is a collaboration between Belgium based Painting with Light’s Luc Peumans and Paco Mispelters. Luc's creative relationship with the band goes back many years, and this year Luc asked Paco onboard specifically to craft the lighting, which again has introduced new ideas and perspective to the visual equation.

Paco listened to the new album which introduces a dancier groove to Clouseau’s extensive and diverse existing catalogue and discussed his initial ideas with Luc. 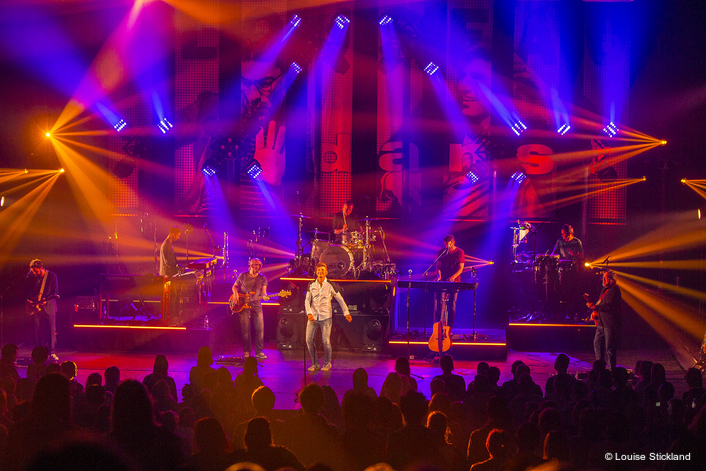 There were also some givens! The lighting brief included utilizing eight ribbon lifts that had appeared on the 2014 tour and proved a great solution for facilitating a fast load in and providing upstage lighting positions in the venues they play – typically theatres and concert halls between 1000 and 3000 capacity. Extending up to 6.5 metres high and carrying up to 100 kg in weight, these are perfect for changing the shape and architecture of the space.

Naturally they were rigged with a completely different set of fixtures from before! They needed bright, light and versatile fixtures, and for the show generally, wanted flexible luminaires with multiple options.

After careful consideration and active demonstrations, they decided to specify moving and effects fixtures from one manufacturer … Chauvet.

Lighting supplier Coruna Lights, from Mechelen made a large investment in the manufacturer to provide new kit for the 7 month tour, with Chauvet’s Rogue R2 Wash and RH1 Hybrid Spot fixtures comprising the backbone of the rig.

Six of the eight towers are positioned in a line upstage, each loaded with 4 x Chauvet NXT-1 moving head LED tiles, orientated at 45 degrees to look a bit quirkier, with one Chauvet Strike 4 blinder in the centre (of the four NXTs). All are attached by special brackets fabricated by Coruna. 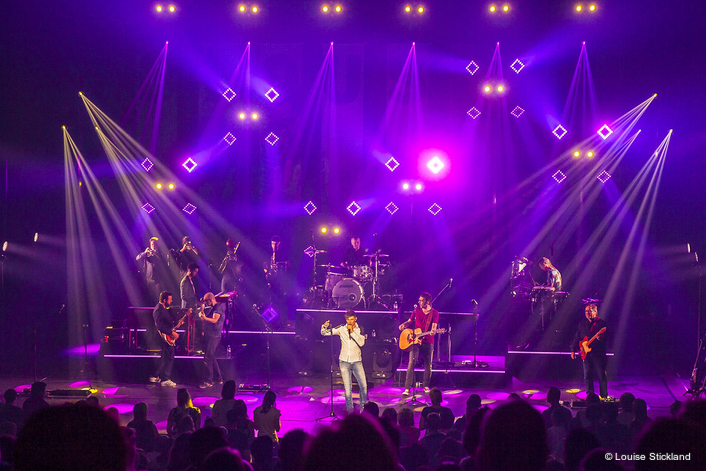 The other two towers are slightly further down and offstage, and all eight of them are rigged with three Rogue RH1 Hybrid Spots.

Paco explains that the towers are positioned at each gig to create the best overall viewing angles for the light show and effects from all around the auditorium … and not just the centre stalls!

The back truss is flown just upstage of the six back towers, and on this are 6 x Rogue RH1 Hybrid Spots and another six Strike 4s which double as general back lighting and specials.

Directly below the back truss on the floor are another 6 Rogue R2 Spots, equally spaced and lining up with those in the air.

Downstage at the front are two fixed position side towers - made from 30cm truss secured on floor bases - which are loaded with LED PARs and two Rogue R2 Washes each, all ideal for tidy and well-targeted front lighting. These fixtures are supported, slightly further upstage each side, by another three R2 washes on 2 metre high scaff poles. 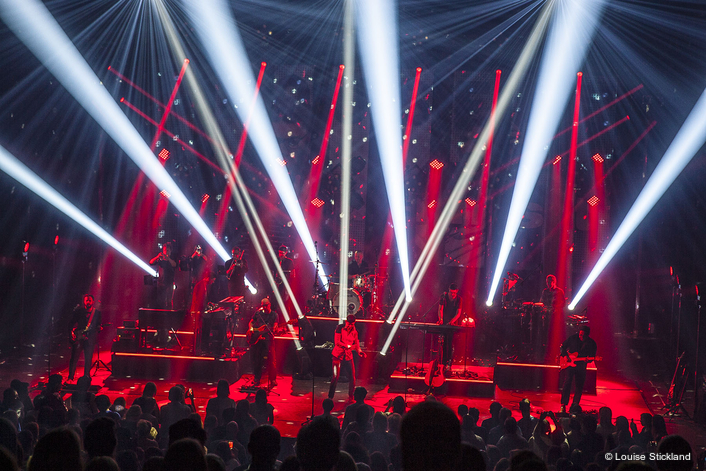 Clamped to the music stands on the band risers are some very small Colordash Quad fixtures – also a Chauvet product - for super-close key lighting on the faces, which is a very efficient and subtle way of covering this tricky task.

Chauvet Epix Strip Tours – a 1 metre strip of 50 individually map-able LEDs - are used to delineate all the risers. Run via ArtNet, these produce fluid kinetic effects adding another layer visual interest to the performance space.

Clouseau delight their enthusiastic audiences from the first to last chords of the two and a half hour set with a combination of grooving new material and classic hits, all delivered with the characteristic energy and style that’s made them one of Europe’s best live acts.

Paco programmed the lights on a grandMA2 light which he is also operating, supplied to the tour by Painting with Light together with an NPU as they are consuming a fair few DMX universes. 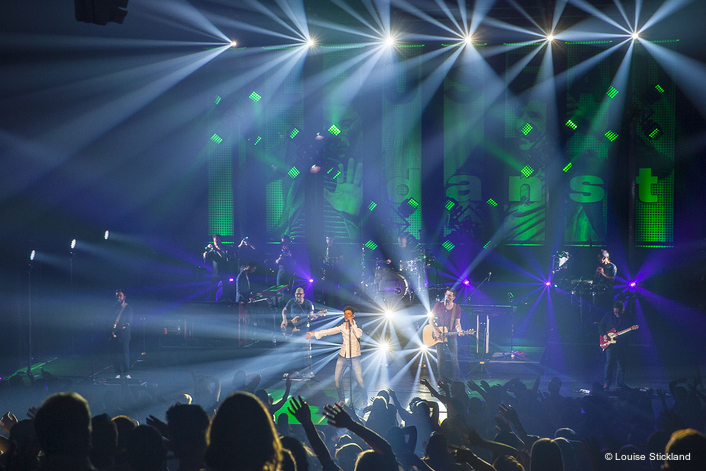 Adding more depth to the stage space is the backdrop, a strong blue-toned black & white image from one of the album promotional photo shoots, split into 8 banner-style columns, with one letter of  ‘Clouseau’ added along each of the banner tops and ‘danst’ spelt out along the bottom of the five house right strips.

The banners are illuminated by a row of Briteq LED PARs on the floor directly underneath each one. The image has a bluish duo-tone tint that can be coloured very efficiently and the whole thing can also easily be 'disappeared' and faded into black at the back.

Taking into account the brief, and the first discussions with Luc, Paco has primarily let the music inspire his programming, choice of colours and looks etc. and with the show embracing multiple genres and tempos, the challenge is to keep it all looking fresh, relevant and special. 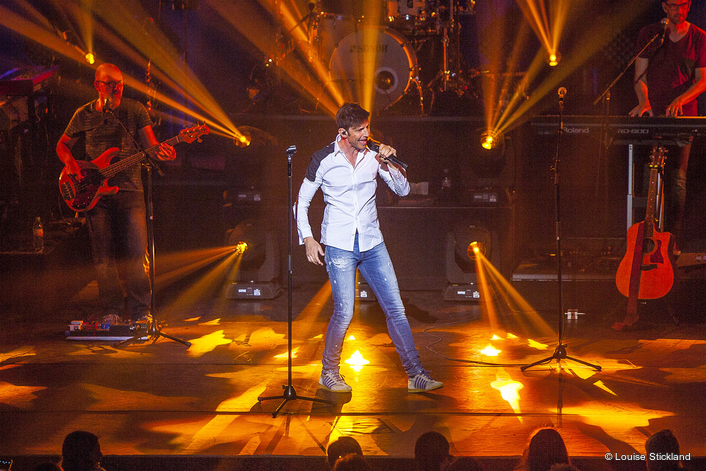 The choice of the Chauvet fixtures has been a huge asset in the process and the tour and production is another big success for the band.

Clouseau Danst runs until September playing extensively in Benelux. In December the band will stage their traditional biannual ‘spectacle’ shows at Antwerp Sportpalais.