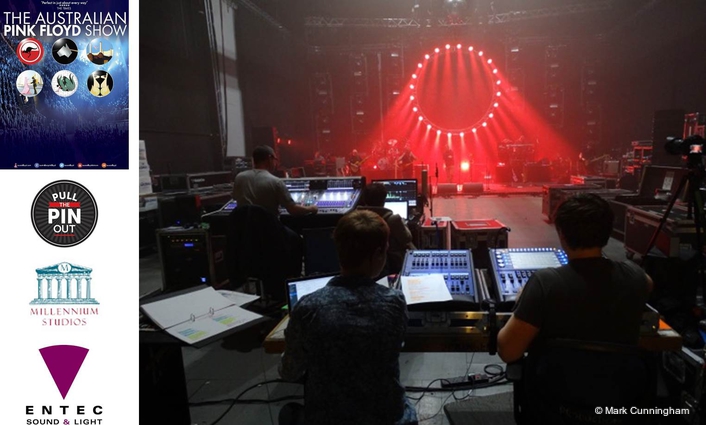 ENTEC is at the hub of The Australian Pink Floyd Show’s new, 2016 tour design…

It’s 2pm on a cold and wet Saturday at Millennium Studios, and the unmistakable sound of ‘Comfortably Numb’ is gently wafting into the car park from an open door. Inside the cavernous ‘A’ Stage, the band in residence is The Australian Pink Floyd Show, the outfit that since the late ’80s has been steadily progressing and refining its sonic and visual recreation of the rock icons’ music to such a degree that even a die-hard fan of the originals could not fail to appreciate.

What began as a tribute band has gradually become a ‘mega homage’, bearing all the production values and technical prowess of a major arena attraction. And in 48 hours from now, the ‘Aussie Floyd’ (or TAPFS) will load out of the Bedfordshire rehearsal complex and head over the Channel to the Zenith in Dijon, to play its first show of the year. 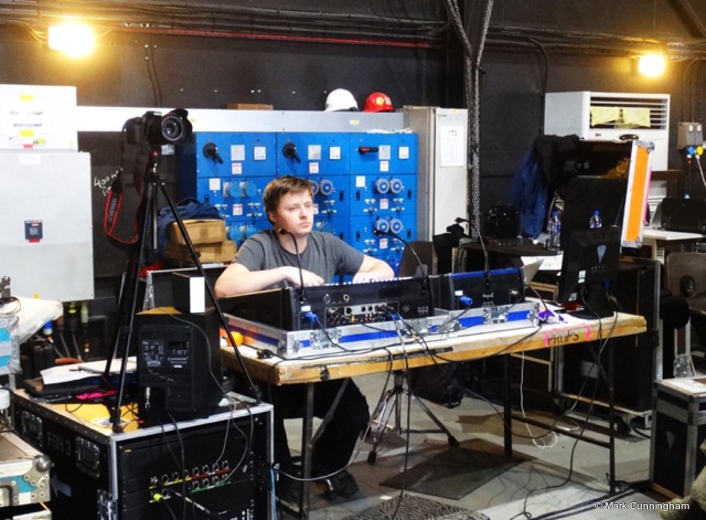 For the last 13 years, Entec Sound & Light has remained at the epicentre of TAPFS’ development, not only servicing the band’s production needs but also offering guidance. The 2016 tour – spanning Europe all winter and spring, then landing in the UK towards the end of the year – is the latest to benefit from Entec’s considerable lighting inventory and experienced crew, but the first to summon the talents of renowned production designer Rob Sinclair and lighting designer Louisa Smurthwaite who, together with TAPFS’ lighting director and programmer, Tom Mumby, have created the band’s first all-new show design since 2011. 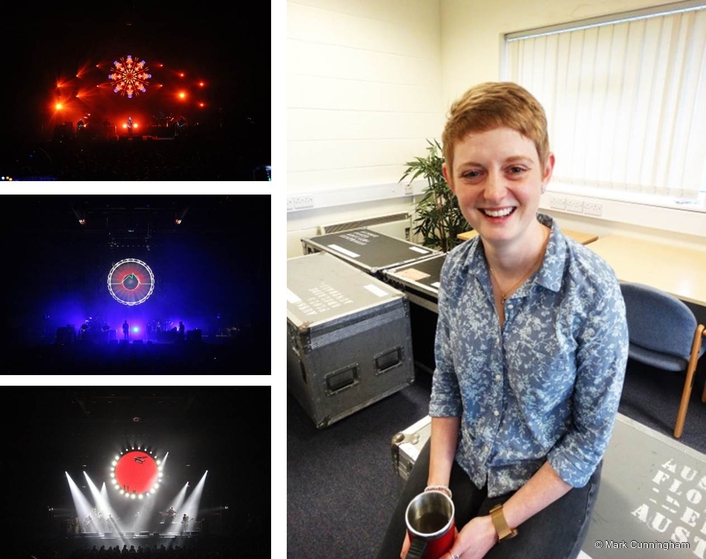 “We are now playing around 100 shows a year and our pattern is to change the show design every four to five years,” explains Kevin Hopgood of the band’s management company, Pull The Pin Out. “Having always approached the design a certain way, we wanted to look at it with a fresh eye this time and the best way is usually to bring in new people whose work you admire. Some aspects are unavoidable, the circular projection screen being obvious because it’s so iconic, but there are ways of doing it and that was our driving force. The way we deal with graphics is also an interesting part of what we do. It’s all handled in-house by our multi-talented guitarist Dave Fowler who also creates the video content that will no doubt evolve throughout the year.”

DELIVERING THAT SPACE CADET GLOW
Adele, Queen + Adam Lambert, Peter Gabriel, Miley Cyrus and Mumford & Sons are among the many leading acts featured on Rob Sinclair’s enviable CV. Together with Louisa Smurthwaite, he has most recently worked on tours by Kylie Minogue and Florence And The Machine (with Entec) and the latest TAPFS production once again reunites the pair.

“Rob and I work together often, and when he was asked to give Tom Mumby a hand with the new design, I was delighted to become a part of it,” says Smurthwaite. “Pink Floyd is one of the handful of bands whose tours have defined progression so it’s a daunting task to start adhering to those values when you have a fraction of their budget, but it’s equally an exciting prospect. I’ve watched old live videos for inspiration but, ultimately, you have to reply on your own interpretation of a particular cue in a song or you’ll get very bogged down with the minutiae of everything.” 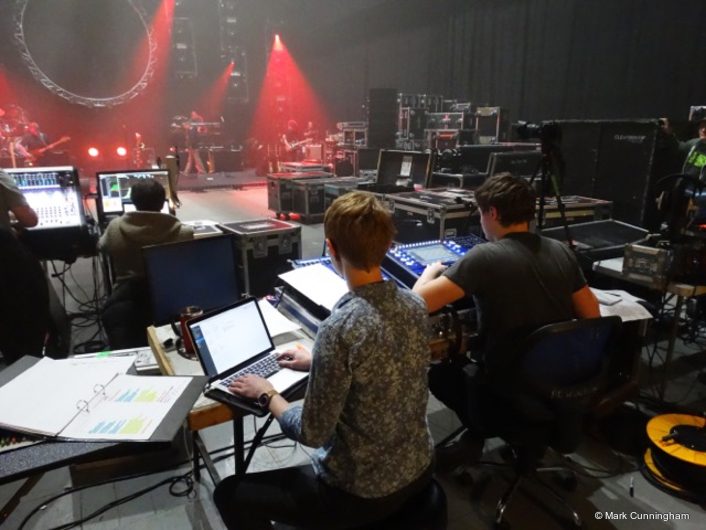 Smurthwaite: “The XBs introduce the audience to the circular truss and screen, and give us that ‘Hello, we’re Pink Floyd’ look, making all the big statements within the show. We have them around the circle to give the video screen definition and in a big wall up top. These fixtures are very dominating – they give us a high level of colour and punch, and make us look large. They’re positioned as such to give us that robotic, Floyd look. One gets used to a certain quality of light output that informs your choice of ‘go to’ fixtures, and Rob and I agree that the XB is a workhorse in that respect.”

While the XB handles all the colour mixing and pushes of even light, the other main light source is Clay Paky’s Mythos, a versatile, hybrid fixture offering profile and beam features. “The Mythos live below our XBs at the back,” says Smurthwaite. “They’re our ‘wings’, basically, and give us a big wall of light. In the process of taking the design back to scratch, we moved the existing Robe 600 LED fixtures from the front truss and put them at the back with Mythos on the floor, achieving our even spread from floor to ceiling. That helps us achieve our big Mythos look with our hard edges and gobos.” 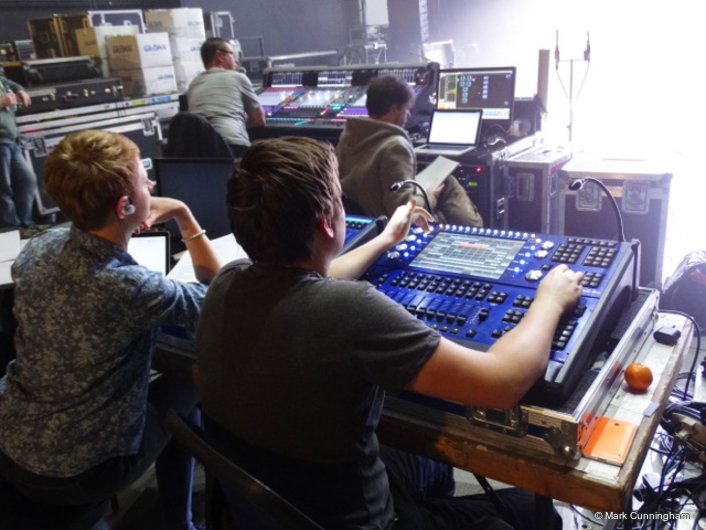 The front truss is now populated by Clay Paky Alpha Spot QWO 800s. These are used to light some of the “fun parts” of the show, such as the inflatable pig and kangaroo, and the dancing Teacher, picking out these elements to help drive some audience emotion.

Another key feature of the lighting rig is the Showtec Sunstrip LED bar. “The Sunstrips give us really good definition along the edge of the stage and in our lighting ladders, and give us a good framework to work around the circle,” Smurthwaite explains. “They fill out the set with a modern yet tungsten vibe, leaving no gaps; it’ll translate both in theatres and in arenas, and they’ll look good on camera.”

The band itself owns a few items of ‘must-have’ technology including a Hippotizer media server, the ChamSys Magic-Q lighting console and wing piloted by Tom Mumby and three green laser units that form part of the equipment run on tour by ER Productions. “The lasers are like the cherry on the cake and they are good to have but we’ve had a re-jig in terms of how we use them, in line with the other changes,” comments Smurthwaite. “I think they add a very interesting facet to the end of ’Learning To Fly’.” 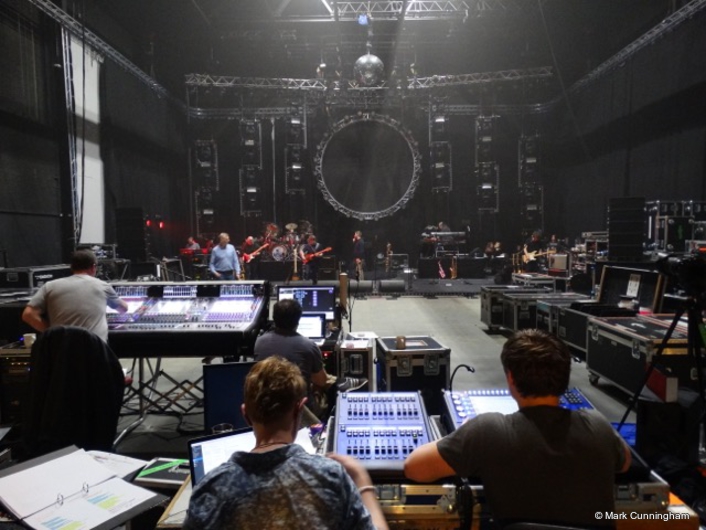 She adds: “There are some quite small, simple moments in the show that I’ve noticed when I step back, and I probably love them more than the bigger ones. One of those moments is in ‘Comfortably Numb’ when we are just using two or three lights. They come in at the right time and they just do their job – it’s beautiful.”

MANAGEMENT ROLE
Familiar to many as Kylie Minogue’s long-time production manager, as well as gaining copious on-the-road experience with Mark Knopfler, Level 42, Toto and Jeff Wayne’s touring version of The War Of The Worlds, Kevin Hopgood first came onboard TAPFS around 15 years ago, as the band started to grow out of its UK-based theatre touring and perform in larger venues in Europe and North America.

“They’d been used to touring in small bites whereas they were now doing it much more extensively,” he says. “I came in as tour manager to help with that transition and also deal with the production side while juggling work for my other clients, such as Kylie. When their previous management contact expired a couple of years ago, they asked me to step in and take over. It was my first foray into that side of the business but I jumped at it and brought in Paul Crockford who has a very substantial history in management [Mark Knopfler, Danny Thompson, etc] to share the responsibility. 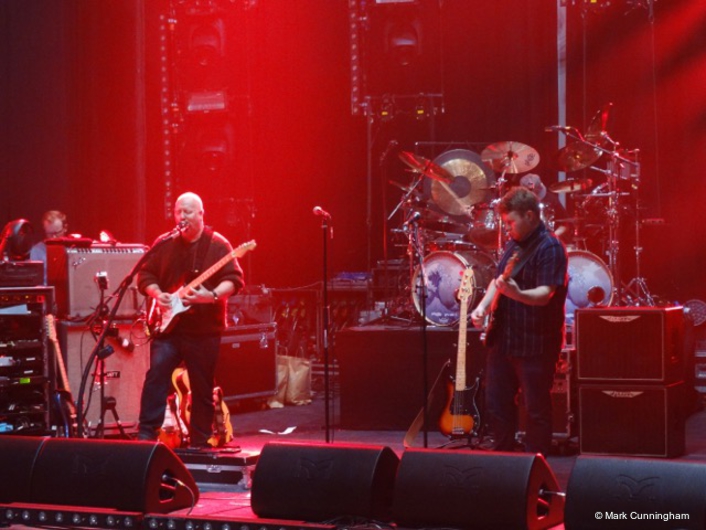 “The close study of how Pink Floyd presented themselves throughout their various eras became an obsession for these guys, particularly with the live audio aspects, and it’s ongoing. They’ve never tried to look like the Floyd but they have been so meticulous about getting the guitar sounds and other complexities as accurate as possible, and that’s really how the band started to rise above the rest of the field. Approximating the general look of a Floyd show has always been a passion and, naturally, they’ve had to be very creative with their design choices.”

When the band’s popularity afforded a leap into arenas, Hopgood was excited that a “decent scaled version” of a Floyd production could at last be achieved, without sacrificing humour. “That’s what really sets them apart from other Floyd tributes,” Hopgood smiles. “They are constantly finding new ways to include jokey asides with their Australianisms and numerous visuals, such as their towering kangaroo. The music is taken very seriously, of course, but the band have a tendency to want to lighten the mood and it’s something that our very loyal audience enjoys.”

Crew loyalty is also something that TAPFS takes seriously, as Hopgood observes. “A lot of our touring personnel have come up through the ranks and good examples include Chris Gadd and Tom Mumby. Our core team is very keen to stay involved because we run a very friendly ship with great people and, of course, there’s the music. In a way, our show has helped to develop many careers – some of the crew have developed their skills with us and then gone on to bigger things, but a few of them have wanted to come back.” 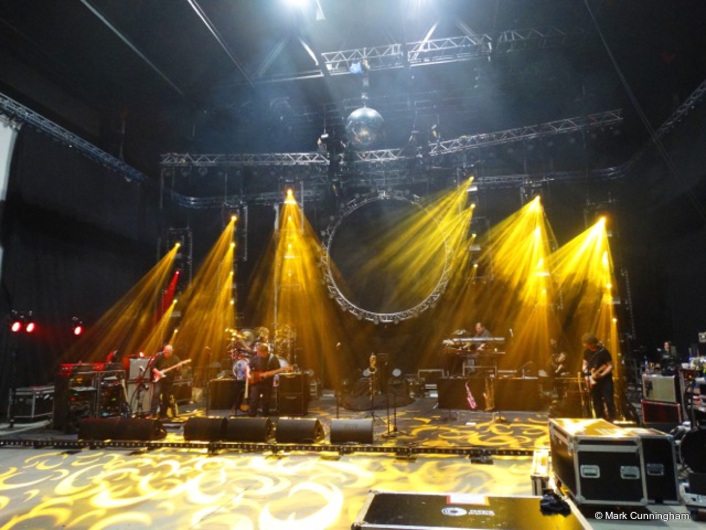 COHESIVE RELATIONSHIP
Kevin Hopgood was already part of the TAPFS team when Entec came onboard in 2003. “They’re very ingrained in our touring now,” he says. “We’ve never really looked anywhere else and have no plans to do so because the service has always been there. They are really good at working with us. Noreen and Adam Stevenson have always serviced this show. In fact, Adam was out on the road with us in the early days before he moved to an office-based position with the company, but everyone there is very intertwined with our show and we do feel very well looked after. They completely get it because it’s been so long.

“Our very cohesive relationship with Entec and their ability to reinvest in new technology really helps us to move with the times, and in that respect they’ve been particularly helpful on this production. What we’re getting out of this rig is a really big-looking show from much smaller fixtures than before, and that clearly helps us with truck space. When they invest in new products on our behalf, they know they will get a few years out of us, and when we’re off the road, they’ll keep the rig together for us which reduces prep time. They simply understand what we need.” 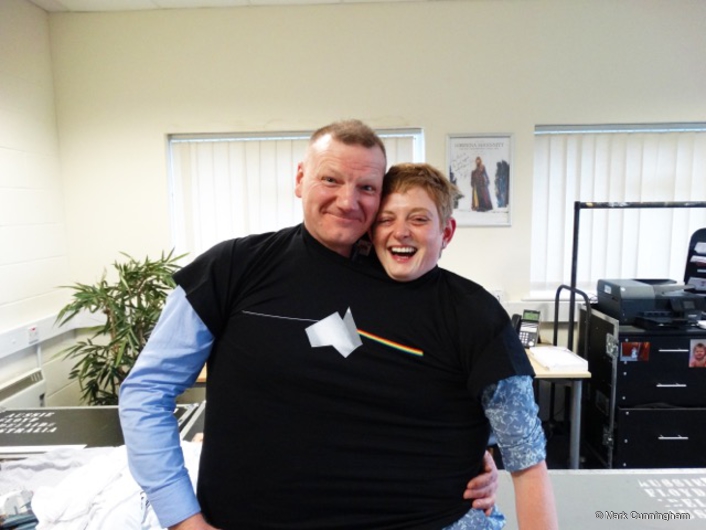 Kevin Hopgood of the band’s management company, Pull The Pin Out with Louisa Smurthwaite

Louisa Smurthwaite is just as positive about working with Entec on both TAPFS and Florence And The Machine. She says: “Entec’s crew and the team back in their office have been great. They were super-lovely on Florence [And The Machine] – where I’ve come straight from – and this. So it’s been a really easy transition from a year of running around with something else, then walking into this. Early January has been very smooth. It’s quite a different beginning to the start of a new year and it’s nice to be in England. Working with Tom Mumby has also been a treat. Tom is a real pro; he’s done so well and I’m sure that will continue.”