Entec on the Road with The Australian Pink Floyd Show

.
Entec’s lighting department is enjoying another busy season with The Australian Pink Floyd Show (TAPFS), currently touring Europe with a fabulous Floydesque lighting design by Phil White which is being operated by Tom Mumby.

Arguably the longest running and most successful ‘tribute’ show on the planet, Australian Pink Floyd (as they are also known) was formed in Adelaide in 1988. They are renowned for their note-perfect replication of Pink Floyd’s iconic music and style as well as adding their own distinctive elements and humour to the mix, which is particularly visible in the video material … and their massive inflatable pink kangaroo, ‘Skippy’. 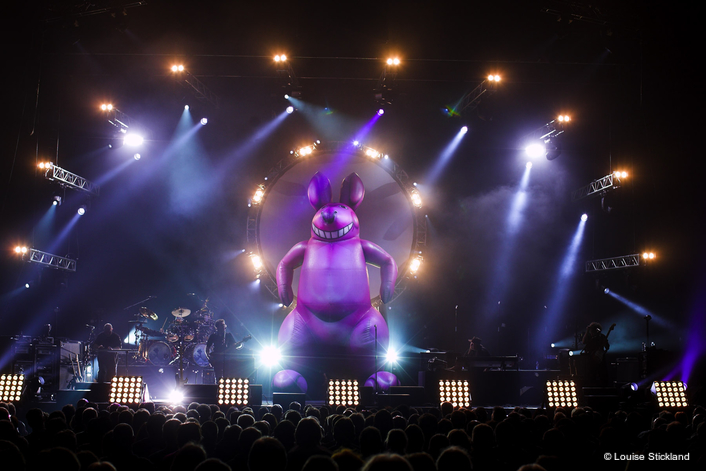 The band tour for around eight months each year and regularly pack venues worldwide with several generations of Pink Floyd fans, enthusiasts, aficionados and geeks.

Entec’s Project Manager Noreen O’Riordan comments, “It’s great to see the popularity of this tour grow together with the investment in production values. It really proves that there is a huge demand for live shows and that a diverse selection of people want to appreciate legendary and influential music first hand. Apart from that, we’re very proud to be part of an absolute top production team and crew”.

Entec’s working relationship with TAPFS dates back to 2004, when they decided to seriously up the ante in terms of production.

That same year, current TAPFS Production Manager Chris Gadd – universally known as Gaddie – also undertook his first gig for Entec as the tour’s lighting and projection technician. His own history with TAPFS predated this by a couple of years when he worked for the original lighting supplier as an aspiring young lampie with big dreams and ambitions.

With the profile of the band growing year-on-year, there has always been constant pressure to ensure that the production keeps pace. Back in ‘the day’, Pink Floyd were almost as famous for their lighting and visuals spectacle as they were for their music.

Current Lighting Designer Phil White has been weaving his visual magic with TAPFS for around a decade, and as well as recreating some classic rock moments has also added his own twists to help make it an exciting and contemporary live music experience. 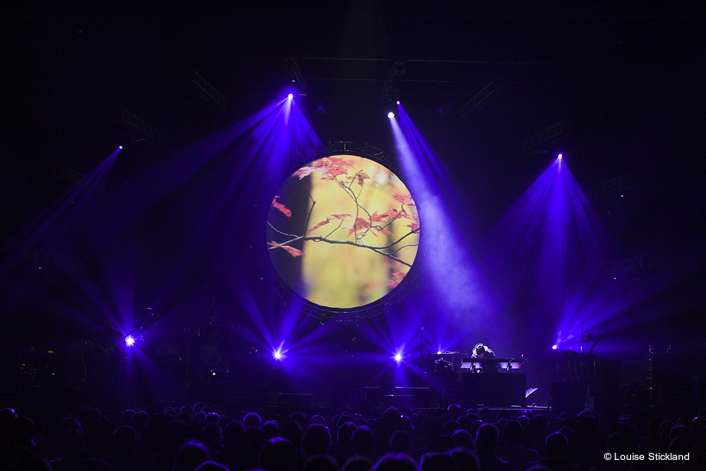 Upstage there is a 5 metre diameter circular truss with a projection screen stretched across the centre, and this is surrounded by 16 x Clay Paky QWO800 Profile moving lights, used for striking effects both shooting across the screen and out from it.

Eight 2-lite Molefeys around the truss point outwards, and the truss is toned with i-Pix Satellites.

Pink Floyd’s arch is recreated in this show with 10 x 10ft sections of trussing, each individually flown end-on from a 50ft wide mother grid installed in the venue roof.

Each of the 10 truss sections has a CP Sharpy Wash and a QWO on it together with a 2-lite Mole on the front edge. Four Martin Atomic strobes are placed on four of the 10 trusses.

Flown up in the downstage corners of the space are two compact side trusses each with four Sharpy Washes, used for all the cross stage washes and front key lighting. This position provides a very neat and accurate throw of light.

The front truss is a 50ft length of mini-beam rigged with six Robe LEDWash 600s for the general stage washes, and five Vari*Lite V*L2000s for band keys, plus a V*L 3000 Spot to cover the three backing vocalists.

On the front rail of this truss, four square 4-lite Moles are positioned for illuminating the audience. Also on the front truss is the doubled-up pair for Christie 10K projectors used to feed the centre circle with video content. These are owned by the band and run via a Green Hippo GrassHopper media server.

Guitarist Dave Fowler is heavily involved with creating and managing the video content which is modified regularly to suit the music being played on the tours year-to-year. 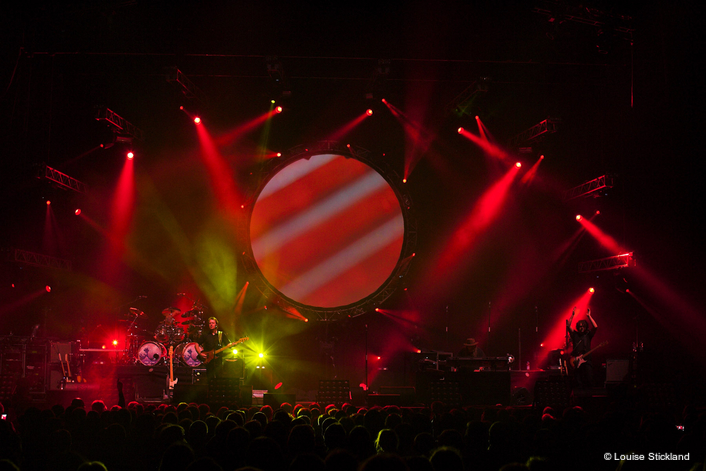 On the floor, another eight QWOs are positioned upstage, four in front of the backline and two on each of the risers. There are six Sharpy Washes – three per side – on the front edge of the stage, mainly reserved for high impact during the massive mirror ball moment in “Comfortably Numb”, which finishes the set.

Then there are seven Jarags along the front of the stage, utilized for rippling type effects and basic text which can be written across their 5x5 bulb format.

Another four Atomics add to the strobe-tastic factor, and three i-Pix Satellites and four ETC Source Four PARs are strategically placed around the drum kit for the big solos.

Lasers include four 4 Watt TARMs owned by the band and eight Beam Bursts provided by ER Productions together with a selection of line grating and diffraction mirrors. 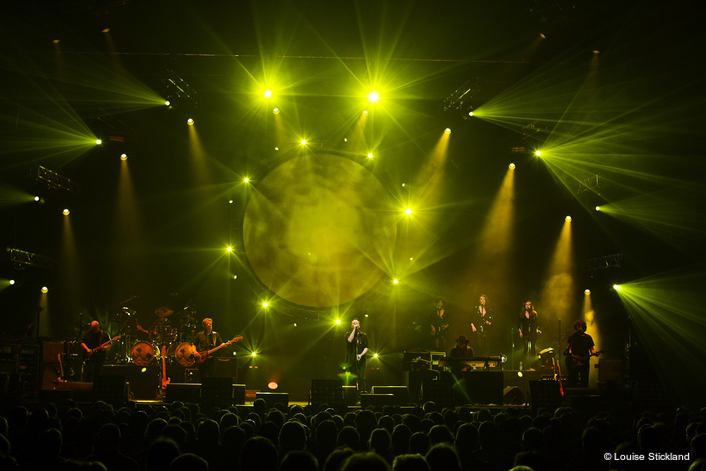 The lighting is programmed onto a grandMA full size console, and both lighting and video cues are run to timecode.

Inflatables always add another dimension to the performance and this year include the Teacher, the Pig and the aforementioned Skippy.

The lighting rig is designed to be ultimately adaptable and fit into a variety of different sized venues yet still give a great show.

The standard stage width size they are work to is 50ft, however this can reduced to 40ft  very easily, and if they don’t have the height the arch trusses can be dispensed with and the lights rigged on the mother grid instead, another scenario which is also very workable. 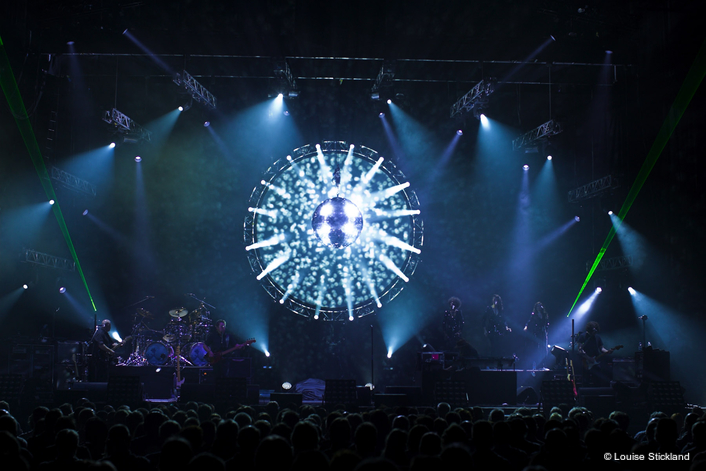 Gaddie comments, “Entec is a brilliant supplier. They always go the extra mile to ensure we are looked after, the attention to detail is excellent … and they are nice friendly people!”

In addition to working as a lampie and lighting / projector operator, the multi-skilled Gaddie doubled as a keyboard technician for one of his early Entec TAPFS tours whilst still helping out the lighting crew. Once he had gained more experience, he moved up to being full time on the lighting crew, and then more recently in 2011, took on the stage management role, before then becoming Production Manager. 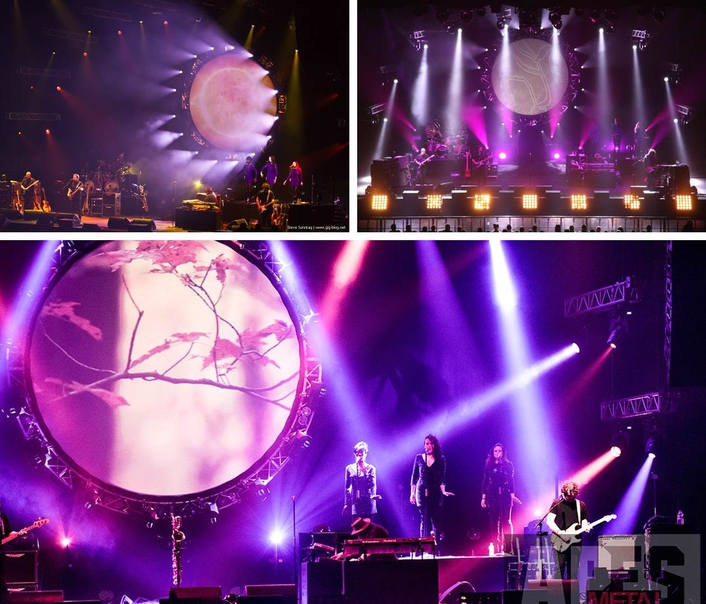 Working in numerous roles gives him an invaluable perspective for the production management job where he is continually considering the bigger picture. “It still all basically comes down to good teamwork and having people who are not only talented in their specialist areas but good communicators and with the right personalities to successfully work and live together delivering great results every night whatever the location and circumstances!”

TAPFS 2015 is touring Europe until May and in the summer, starts two months in the US.