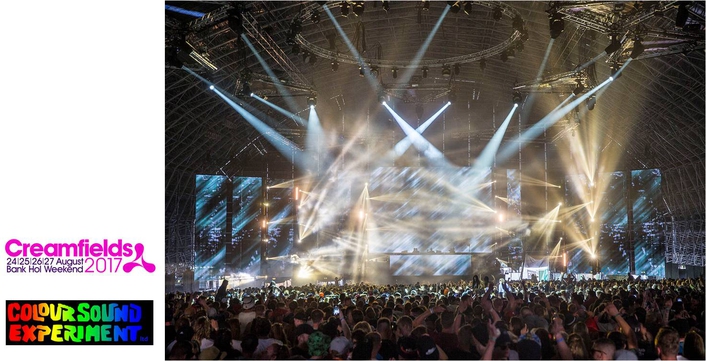 Colour Sound Experiment supplied lighting, rigging and Kinesys automation to two high profile arenas at the 2016 Creamfields dance music extravaganza staged in Daresbury, Cheshire, UK.
The festival was memorable for many reasons including the brand new Steel Yard venue –an awesome 50 metre wide by 100 metres long space offering up to 26 metres of headroom with a capacity of around 9,000, designed and built especially for Creamfields by Acorn Structures.

“We were very excited to be asked by the event’s technical producers LarMac LIVE to supply lighting and rigging for Steel Yard,” says Colour Sound’s H (Haydn Cruickshank), “it’s always interesting and invigorating to work in new spaces, you have to think out of the box and everyone – all the individuals and companies - involved in creating the amazing Steel Yard vibes worked very hard and as a tight team to deliver a great experience for the Creamfields community”.
Colour Sound also provided lighting and rigging for the CF 06 arena, used to present three dynamically different nights of cool sounds over the weekend - club phenomenon Paradise, U.K. DJ and radio presenter MistaJam’s ‘Jam Packed’ and U.S. DJ MK’s ‘MK Area 10’ on the Sunday.
On site, the Colour Sound’s crew of 10 were chiefed by the unflappable Alex McCoy … 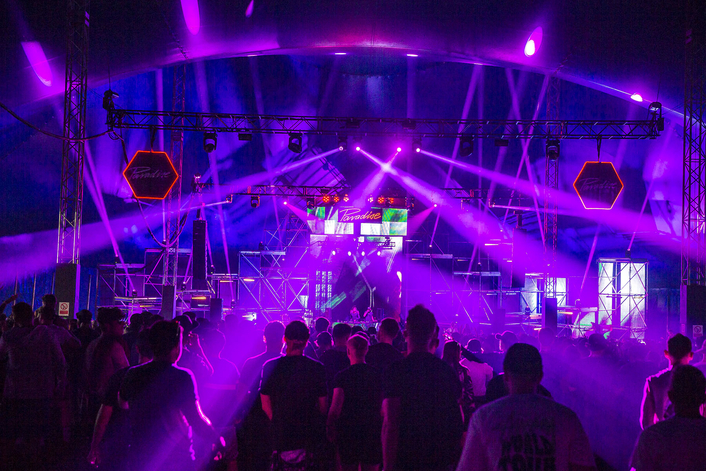 Steel Yard
The lighting design for the structure was created by Dave Kyle for Colour Sound working closely with Colour Sound’s Fletch who fine-tuned it to fit harmoniously into the massive roof space.
It was an ambitious and off-beat design that included flying lighting pods over the audience which looked fantastic and brought plenty of elements of visual surprise.
Colour Sound also asked Simon Barrington on-board to operate lighting for Steel Yard, who brought his vast fund of EDM lighting and visuals experience to the party. 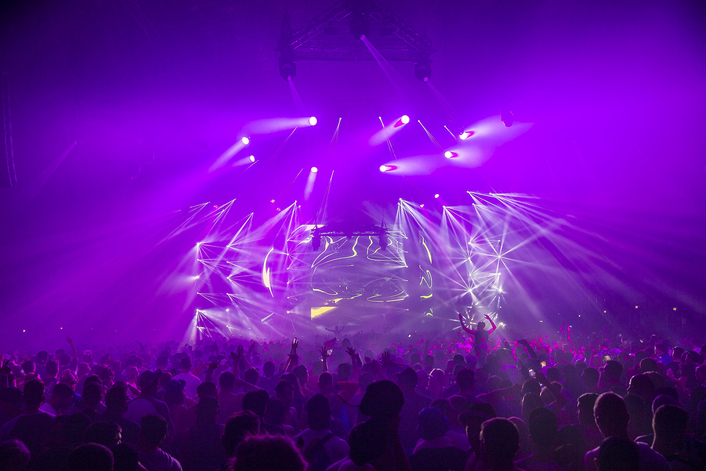 Sixty rigging points were installed in the roof by Colour Sound’s riggers – Jamie Hogan, Toby Lovegrove and Az Khalid  - including bridles and spreader trusses to distribute loads and get everything in exactly the right places. Colour Sound also provided the required rigging for video supplier PRG XL Video and audio company Britannia Row as well as all their own lighting points.
Over the stage three lighting trusses were sub-hung from the video trusses, four more lighting trusses rigged in the wings and four vertical ‘totems’ were positioned onstage which were shared between lighting and video, with  another two used exclusively for lighting. 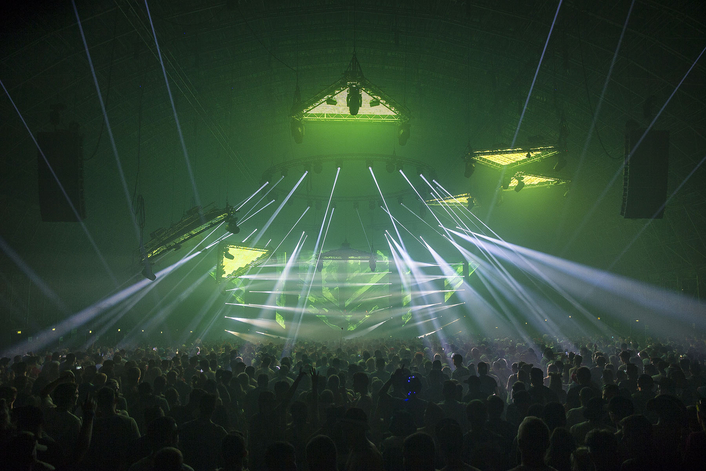 The onstage lighting fixtures were 36 x Clay Paky Sharpies, 36 x Martin Atomic strobes plus 30 x Showtec Sunstrips which delineated the vertical profiles of the onstage trusses and mimicked the form of the LED screens.
Simon undertook some serious pre-visualisation work using Capture which helped onsite as time was exceptionally tight … and the pressure … especially with this being a new venue with all eyes watching … was intense!

Out in the Steel Yard arena, the lighting took on an architectural aesthetic to compliment the raw industrial magnitude of Steel Yard’s interior, with a 10 metre circular truss in the centre surrounded by eight 4-metre equilateral triangle truss pods, each moved on three axes of Kinesys driven Liftket motors.
Either end of this, at the top and bottom of the arena, were two 8 metre trussing triangles – four in total - which remained static.

The smaller triangles were each rigged with three CP Alpha Spot 1500s on the truss apex’s, together with two 2-lite Moles and an Atomic strobe, and they were also filled with Stealth LED video mesh.
The larger triangles each featured six Sharpies, four Sunstrips and three Robe LEDWash 1200s … and eight Robe LEDWash 1200s provided the main wash lights on the circle.

Choosing powerful fixtures like the LEDWash 1200 and the Alpha Spot 1500 enabled the vast space to be filled with intense beams of light and the audience to be pulled into the action with the tight, bright Sharpies punching through for contrast. The moving triangles dramatically added to the scope of the design.
Simon operated using a ChamSys MQ200 and also ensured that any guest LDs had all the facilities and assistance they required.

CF 06
The asymmetric stage design gave this arena a nice visual edge, together with the random and slightly chaotic 24 metre wide 7 metre high scaffolding stage set, harking back to the early days of pop-up warehouse parties, to which Colour Sound’s Fletch added yet more flair and style with the lighting.
Fifty Sunstrips were rigged directly to the scaffolding, following the flow of the asymmetry. Six i-Pix BB7 (the famous flower shaped ones) and four Robe LEDWash 600s made up the ‘crown’ which was cantilevered out over the DJ booth … and had both lighting fixtures and video elements sub-hung from it, all of which were pixel mapped for additional flexibility.

At the core of the stage lighting were 28 x Robe Pointes, with another 10 upstage shooting through the scaffolding and video mesh, paired with 10 x Atomics.
Out in the room, three 18 metre trusses were flown from the tent king poles, each loaded with four BMFL Spots, four Pointes and two Atomics.
The DJs were illuminated from two LEDWash 1200s on the downstage edge of the stage, shooting across, with all lighting run via a ChamSys MQ80 operated in shifts by Toby Lovegrove and Doug Coppell with Mel Cornish as the systems tech.

The other Colour Sound crew members – not already mentioned - working between the two arenas were Katie Flanders, Lewis Beal and James Bunning.
Alex comments, “Non-conventional lighting schemes as we saw like both of these arenas – are always the most challenging to deal with in terms of prep and installation, but all the extra effort is so worth it as they ultimately yield the most rewarding results!”