AVICII Burns Up the Stage at Creamfields 2014 with SSL Live 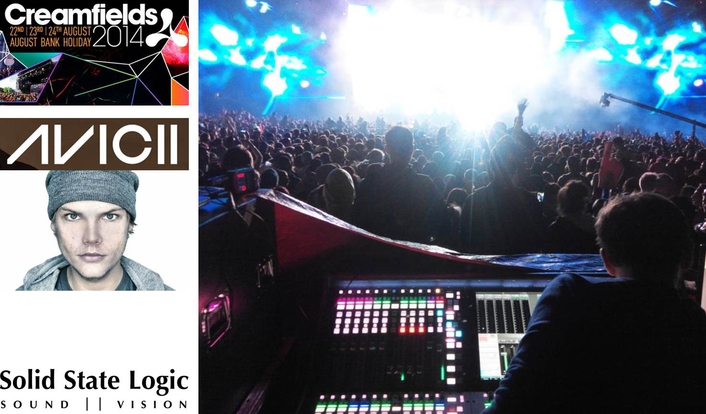 We A/B’d the SSL Live against another digital console and the results blew my mind”
Since its modest beginnings in 1998, the Creamfields dance festival has grown to become one of the largest electronic music events in the world. Creamfields 2014 featured multiple stages catering to crowds of EDM fans, which exceeded 60,000 daily. Swedish DJ, remix artist and producer Avicii headlined the South Stage at the peak of Creamfields 2014, while his FOH engineer, Wayne “Rabbit” Sargeant, ran the show using an SSL Live.L500 console. The main North and South Stages both featured large-scale PA systems, supplied by Britannia Row Productions, Ltd., with SSL Live consoles at front of house that kept fans raving for the three-day-long end-of-summer party.

“Avicii has a simple setup, with Pioneer CDJ-2000NXS players feeding a DJM-900NXS DJ mixer,” explains Sargeant. “Unlike other engineers, I’d rather keep everything in the digital domain and avoid doing unnecessary A/D and D/A conversions, so I use the SPDIF digital output of the DJM and convert it to the AES digital format (which is accepted by most PA systems). The XLR analog outputs on the mixer have limited headroom so when a DJ hits them hard the outputs will distort. Using an SSL Live digital stagebox employed with the console gave me the exact capability that I needed, with an AES digital input to accept the mixer’s output at the stage. Patching the digital signal into the L500 gave me plenty of headroom on the output of the mixer and a cleaner signal path. I’ve found that in large venues where the bottom end is hard to control I’ll get a much tighter bottom at a 96 kHz sample rate, which of course is what I get with the SSL Live.”

Since Avicii does not have a set list and is always performing off the cuff, Sargeant describes his FOH duties akin to on-the-fly, live mastering. “Obviously, there’s a big industry for mastering and what I am really doing during the show is tuning the system and mastering the tracks that Avicii is sending to me,” he explains. “I used the L500 onboard multiband compression and dynamic EQ to enhance the tracks, make them sound consistent, and fine-tune the bass for the venue. I’m also using the Waves MAXX BCL processors as an AES insert to the console, and this is the best I’ve heard it. For EQ, I’m mainly using L500’s dynamic EQ, adjusting it to suit the different types of tracks. If it’s a techno track, you need a driving high-mid to keep the snare going. Some of the vocal tracks tend to be harsher, so I need to compress them and I find that the dynamic EQ works better for that application because it’s more subtle than just tweaking the parametric EQ. When mixing on other consoles, I generally find some of the high frequencies to be quite harsh. I’d have to EQ that out, but the SSL Live has this warmth and depth of the solid lo-mid response that balances the high frequencies so I did not have to do that.”

Added to the unique requirements of an Avicii performance is the fact that the DJ does not use standard instruments for his performances. As such, Sargeant has had to develop an engineering style unlike that of a traditional FOH engineer. “I constantly have to adjust the EQ on the left and right signal path as you would do when you’re in a mastering suite, which makes sense because a lot of Avicci’s tracks have varying degrees of mastering,” adds Sargeant. “He also had 11 new songs in the set that haven’t yet been mastered, so I used a lot of those mastering techniques to make the levels correspond with his other tracks.”

Given Sargeant did not have a lot of time to become accustomed to  the L500, he said it was most helpful to have the dynamic EQ on the large screen and the standard parametric EQ on the Channel Control Tile. “That setup allowed me to do two things at one time that would normally be done separately on an analogue surface,” he says. “The interesting thing about the SSL is that there’s many different ways of working, so when you’re in the heat of the action you can keep it simple and straightforward. I was able to use the physical knobs and the touch screen controls for quick access to the EQ parameters.”

As Creamfields was Sargeant’s first experience using the SSL Live, he didn’t have time to do a full sound check, which is often the case with multi-act festivals. “Thankfully, I had an opportunity to A/B the L500 against another popular digital desk before Avicii’s performance and the results blew my mind,” he continues. “I thought to myself ‘I have just got to use the SSL. It’s the best sounding desk I’ve heard in years.’ It was like listening to a high-quality, 180-gram vinyl pressing being played on a beautiful Linn Sondek turntable, then amplified with amazing speakers. The sound was so analogue through the SSL, with creamy, thick low-mids and warmth. I think that part of the spectrum has largely been ignored in the digital desks, but through the SSL it was thick, warm and huge. I started in 1987, so I went through the analogue period. Then suddenly it turned around and we ended up with digital consoles that have not been particularly impressive. The SSL Live has picked up live audio after the market was sort of dormant for years. It’s an exciting prospect for live sound.”