Colour Sound’s Haydn “H” Cruickshank says, “We were delighted to win this tour which presented a perfect opportunity for us to expand our video department, invest in comprehensive and sophisticated motion control and expand the extensive moving light stock with the latest Robe technology, together with smoke machines, fans, cabling infrastructure and much more. As always it is a pleasure to work with Jvan and help realise his ambitious and demanding show designs”.

Jvan has developed a highly original aesthetic for the show which highlights 20 Years of Placebo at the forefront of the alt.rock movement, coinciding with the release of a new compilation album, “A Place for us to Dream” and the start of this touring and live performance campaign.

Jvan wanted a simple clean look for the stage – almost like a lightbox but with moving image. This large video presence video on stage is a break from past Placebo tours – on which Jvan has worked since 2005 – and his challenge was to make it inventive, interesting and unconventional.

He decided on a large screen at the back for impact when needed, also a surface area that can be minimised and changed completely with clever content application.

“I needed a video presence on the show but wanted to bring a different, iconic and provocative visuality to assist a real live curation referencing 20 years of incredible work and moments,” he said. 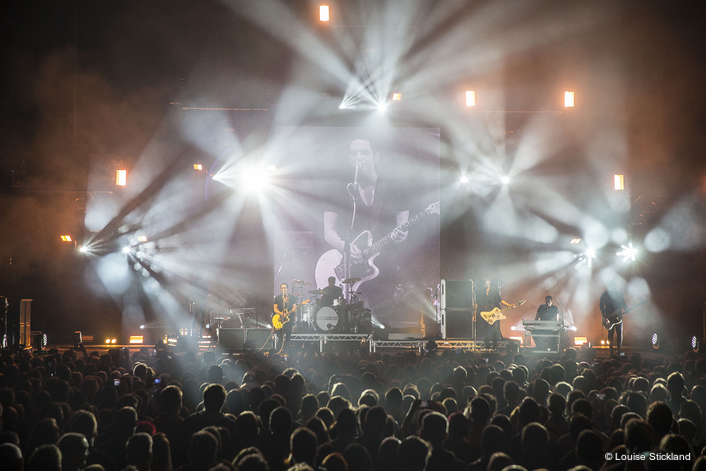 Over the years Jvan has always produced fresh and imaginative ideas and looks for his varied client base, and not selling his soul or the heart out of a design is one of his trademarks.

“It’s been fantastic working with Colour Sound. Their willingness to invest in so much new kit to facilitate the design and provide a top crew shows impressive commitment”.

The 18 metre wide by 6 metre high upstage screen is made up of Colour Sound’s BT20 product. Crew Chief James Hind and Frankie McDade – both top level Colour Sound crew – also designed special touring frames into which the LED screen is fitted to enable quick and expedient deployment and de-rigging / storing for transport.  The screen itself is hung on a run of JTE 52cm super truss.

In addition to this, there are five I-shaped trussing pods flown in the upstage / downstage orientation which have 2 x 1 metre frames of BT-7 LED screen on the audience facing ends.

The five pods move up and down into several different shapes and positions during the show, each on two Liftket half tonne vari-speed motors powered by Kinesys Elevation 1+ drive units.

Two 5 x 6 metre side screens, also BT-7, are flown on JTE super tower truss, finished with three 2 lite Moles to connect them to the show, rather than looking like an arena add-on!

The playback content has been crafted especially for the tour by Jvan, some of it comprising re-mashed music videos from Placebo’s vast body of work over the years, and some of it brand new graphic style material. 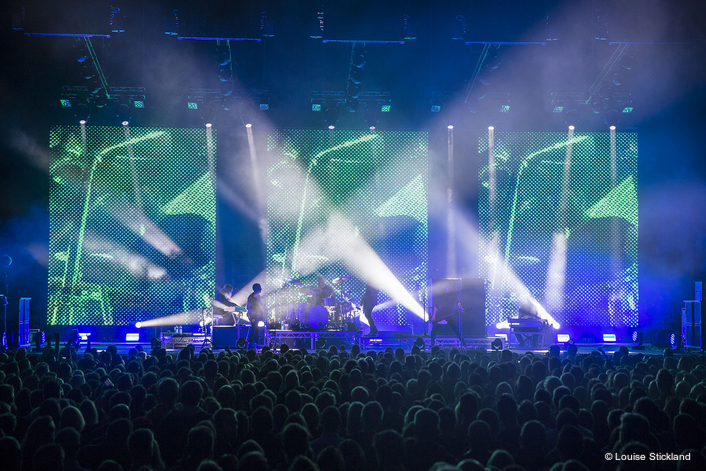 The appearance of all the content takes a more cinematic approach, “It’s about 20 years of a ground-breaking indie band who have always pushed creative boundaries musically and lyrically … so I wanted to create a live film playing behind them that helped provoke a new energy for the audience but something that is also relevant”.

The 10-camera package comprises five Panasonic AW-HE60Ss and five AW-HE2S static cameras which are dotted around the stage and clamped to various bits of backline kit. The robo-cams are operated on alternate shows by Frankie and Colour Sound crew member Chris Foot. At FOH fitted with a 76 mm long lens, is an operated Sony HX-100 broadcast camera.

All the camera feeds go into a Black Magic Design ATEM 2ME switcher, with the mix cut by camera director Fergus Noble. He’s been involved in various Placebo video aspects since 2007, so he and Jvan enjoy a great synergy. He knows the style and look of shots that Jvan is looking for.

The camera feeds then go into the Catalyst media server – together with the playback video – and are mapped to the various screen surfaces.

As the requirement – from both the band and Jvan – was for a non-mainstream ‘IMAG’ mix, a range of pre-selected treatments created by Jvan are also applied to the camera signals in the Catalyst … which is triggered by lighting director on the road / operator Hunter Frith, via his ChamSys MQ200 console.

Lighting and video are included in the same cues. 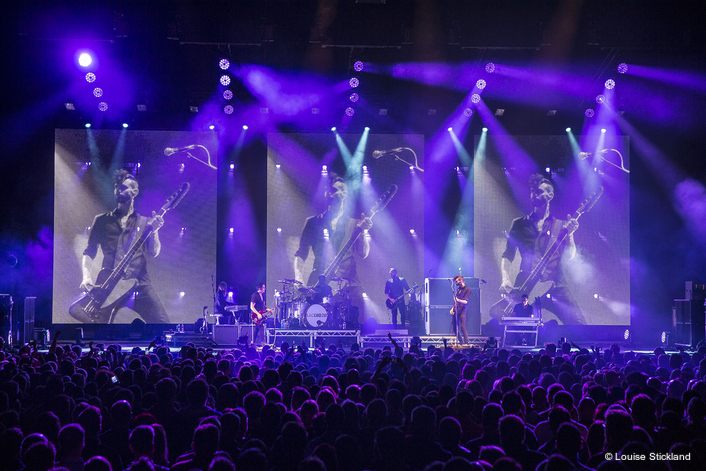 The end result is a stark, stripped back yet fluid collage of moving images evolved by Jvan and Fergus, plus edgy grading, colour and texturing that harmonises beautifully with the music, deconstructing the images, combining with the lighting and subverting the expected.

The movement of the pods changes the shape and identity of the performance space dramatically and dynamically, especially during the last third of the set, when they start taking on some extreme angles.

It’s essentially a visual system rather than an IMAG mix explained Jvan, providing a pivotal visual environment in which the band play that “leaves a lasting impression of Placebo at this seminal point in their career”.

Once the vibe of the video was established to a specific point, Jvan then started adding lighting to the bigger picture.

As with the video, it was all about being off-beat and daring, with lighting fixture placement crucial in maintaining the stylish minimalism of the oeuvre.

Each of the pods – in addition to the video screen at the audience end - contains four of Robe’s new Spiider LED WashBeam product, two Robe BMFL Spots and four Claypaky Stormy LED strobes.

The Spiiders are used as the main wash lights covering the band and stage, in conjunction with some LEDWash 600s on the front truss.

Colour Sound devised custom bracketry to centre the lights to on the pods and fix them solidly for the more acute inclines. 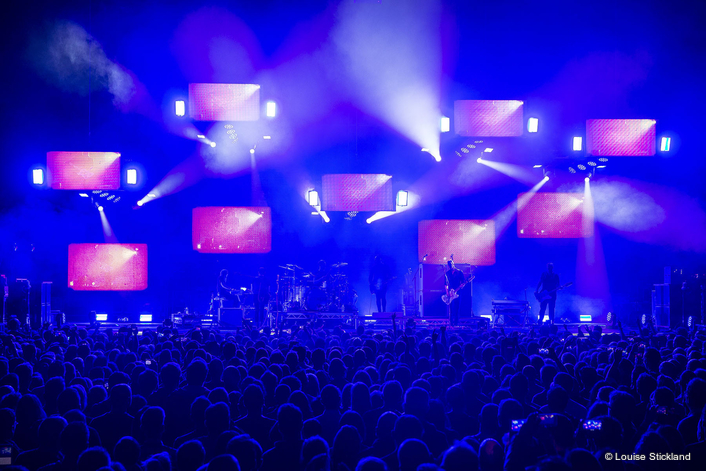 A new Kinesys Vector control system was part of the automation package, which has been programmed by James who also runs automation for the show.

The pods are flown on a 6 metre x 16 metre box mother-grid made up from Litec QL52 trussing, with the rest of the rig on Litec EXE-RISE hoists, part of another major purchase by Colour Sound earlier in the year.

The front truss is loaded with eight BMFL Spots, four Robe LEDWash 600s and eight 2-cell Moles, the latter facing into the audience – the show involves plenty of audience interaction.

Behind the semi-transparent BT-20 screen at the back is ‘the matrix ‘ – a set of three 17 metre long stacked QX30 trusses, each rigged with 12 x ProLights Diamond 7 Beam fixtures and six 2-cell Moles. When these come on they add huge depth to the space and an additional dimension – suddenly shooting through what initially appears to be a solid surface.

On the floor – in a line upstage – are eight BMFL Spots on the deck, 10 x Stormies  which are also used for colour washing effects … and eight 2-lite Moles. On the downstage edge of the floor are six more Diamond 7s a side, plus three more Spiiders a side for low level cross lighting and effects and also for beaming out into the audience pulling them into the stage action. The central flower effect of the Spiiders is used to texture the audience very effectively.

It’s a well thought-through rig with every fixture carefully selected, worked hard and required to multi-task … very much Jvan’s style as he applies intelligence and thought to the entire process.

Atmosphere is another essential visual element with as much attention to detail paid to smoke and haze as to video, lighting and automation by Jvan. It’s provided by six new Smoke Factory Tour Hazer IIs plus two Jem ZR44s and four powerful TMB ProFans to move it strategically into the right places. 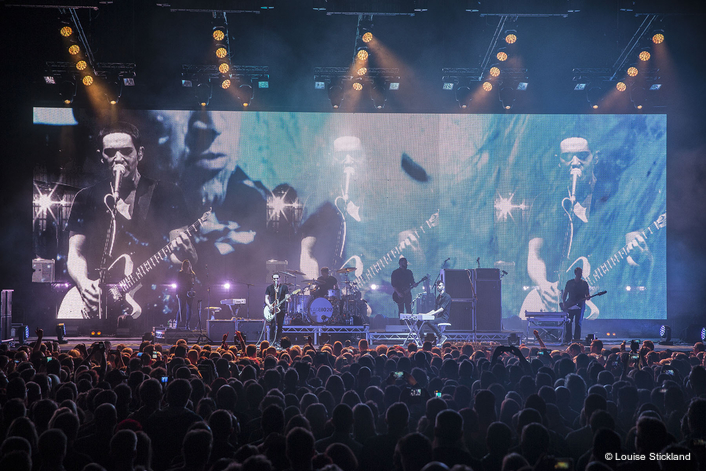 Other new / special items sourced for the tour include a dimmer dolly along with two 72 way SES power "D type" distros and Outboard motor controllers for the non - Kinesys motors.

Joining James, Frankie and Chris on the Colour Sound crew is Aamer Diaz. Keeping everything in check on the road by production manager is Allan Moffat and the tour rigger is Katy Flanders. Adlib is supplying the audio.