Colour Sound Has Desire for Hurts 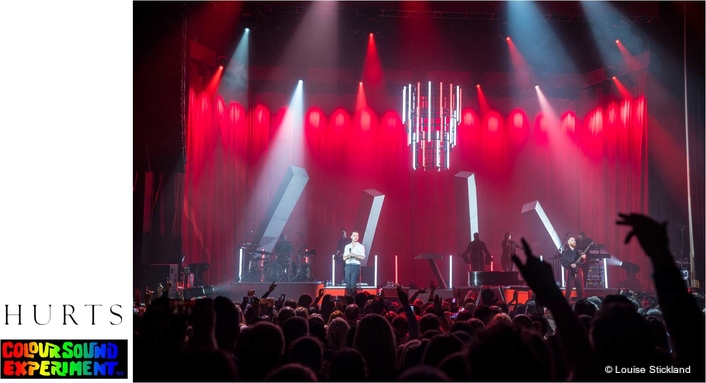 Colour Sound Experiment supplied lighting and crew to the most recent UK and European leg of synth pop duo Hurts “Desire” tour which included many adventures and the presentation of some superlative shows in more off-gig circuit reaches of Europe.

These included Moldova, Siberia, Belarus and Ukraine, and was a test to the tenacity, ingenuity, commitment and camaraderie of production manager Craig Sherwood and his team combined with the ardent enthusiasm of the band’s fan base. 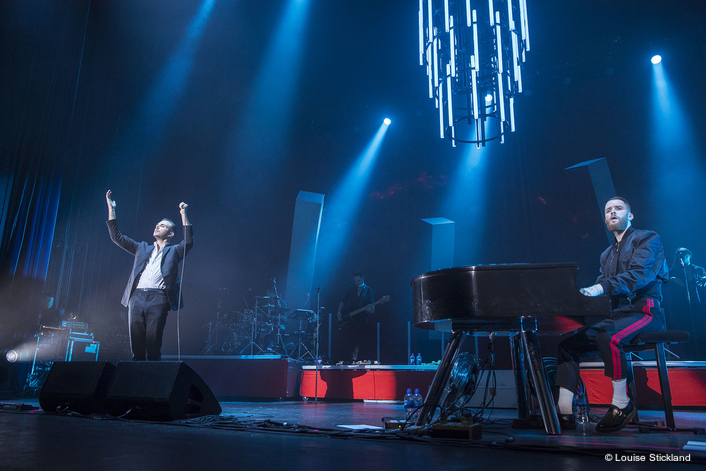 Award winning production designer Rob Sinclair created the scenic and lighting design and worked with Matt Arthur as lighting director / programmer and operator on the road. It’s the third Hurts’ album cycle for these two, who have worked together in a similar format for the last 10 years.

The band’s production and the relationship with Colour Sound as a lighting and rigging supplier also goes back a long way.

H (Haydn Cruickshank) commented, “We always love working with Rob! You never know quite what to expect, but when the design is revealed, it’s always inventive, different and looks amazing! It was also great to be back on the road again with Hurts … we have enjoyed seeing their career success grow and grow due to a lot of hard work and some excellent music, and it was great to be working with Craig (Sherwood) again”. 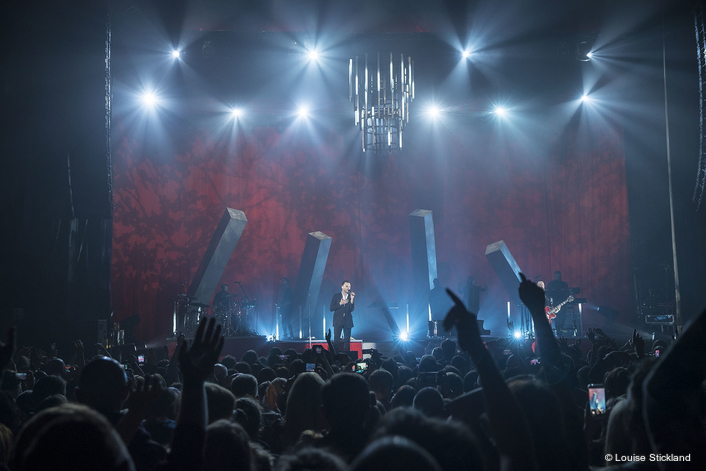 For this first two weeks of the tour in Siberia, they took a floor and specials lighting package which fitted into one truck together with the audio gear. When they reached Riga, another truck was added carrying the full top lighting package and additional sound. The full production then continued until the end of the tour, another five weeks around Europe concluding with two highly memorable UK shows in London and Manchester.

Matt was joined on the road by a Colour Sound crew of Sam Kenyon (chief), Jonnie Westell and Liam Rudd. Sam and Jonnie did the whole tour including the first two weeks and were joined by Liam in Helsinki as they ramped up to the full rig.

Rob created an uber-cool looking set and lighting scheme based around four ‘concrete’ pillars or stalagmites measuring between 12 and 16 ft. long and 20 inches in diameter, all offset at obtuse and jaunty angles and rotations! 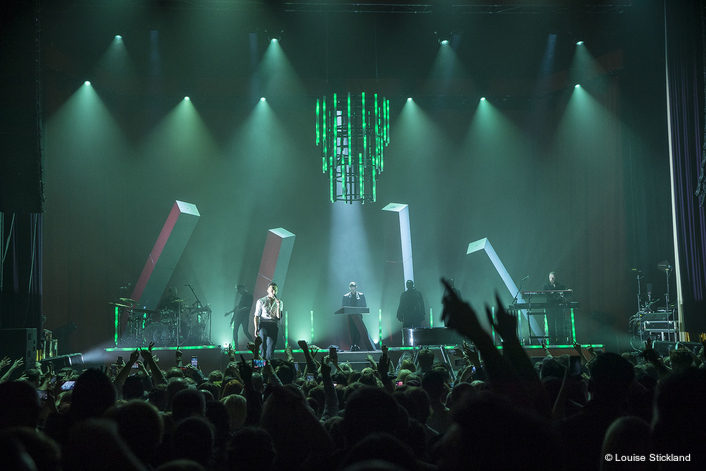 These lent themselves perfectly to being lit, and particularly well from fixtures on the floor and mid truss. The set and lighting rig was designed to be ultimately adaptable and during this first six weeks of the tour they have played anything from 12,000 seater arenas to 600 capacity clubs, which entailed utilizing several imaginative permutations of the rig to ensure that the band had at least some continuity for their performances!

The quirky industrial chic look set the scene and was augmented with a practical and compact lighting rig plus a couple of visual surprises which were revealed as the set unfolded, to bring a flourish of theatrical magic.

At the essence of the design was a quest for dimension, side light and the colour red. Rob also didn’t want any blinders or strobes ... so those effects had to be created with other luminaries, another little challenge for Matt as he worked out the best lighting looks and scenes during production rehearsals at Cato Music in Wimbledon, south London. 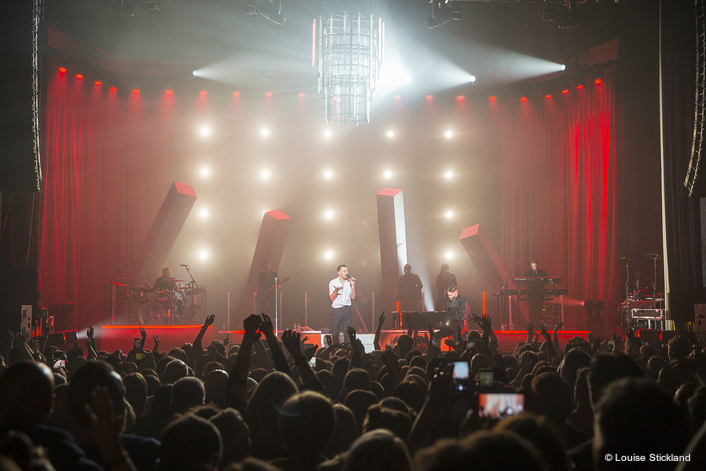 Having a structural set to light made the performance area into a real 3D space and a great starting point for Matt to light. The four pillars were constructed by Get Set Scenery from Wales out of polystyrene and included large bases that slotted beneath the band risers upstage. The riser skirts were dressed in the same ‘concrete red’ and grey tones as the stalagmites.

They brought an overall edgy – at times a bit sinister - architectural look to the stage, which neatly reminded everyone that a Hurts show has plenty of hidden depths!
One of the lighting specials was an impressive chandelier made up from 36 x Martin Sceptron LED battens attached to three concentric aluminium rings of 5, 4 and 3 ft. diameters respectively. The three rings are fixed together and concertina into one other for storage/ transport in a large flight case.

It was flown on a truss with two Colour Sound Kinesys motors so it glided in and out to different positions, controlled by Sam using Kinesys Vector software. When they had the headroom, it was flown into the roof and hidden completely for the start of the show, dropping in during the opening sequence.

As well as some excellent eye-candy for the up-tempo sections of the set – programmes as standard lightsources in 10 channel mode, utilizing the internal effects - the chandelier helped create a moody, intimate clubby ambience for the acoustic numbers when it was flown in low and right next to the band. 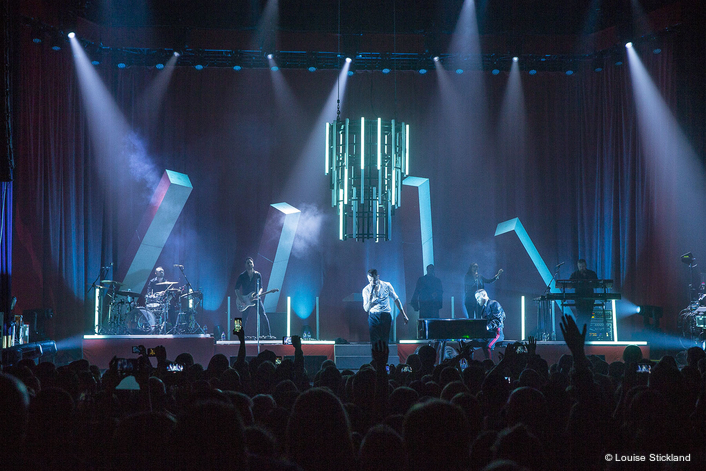 The second special effect was an upstage truss initially hidden behind the back paprika red drapes which were attached to a 12m Tab Track and opened / closed manually to reveal 20 x 1K fresnels rigged off 5 x 6m vertical pipes.

The first reveal was half way through the show, letting a blast of vibrant, powerful soft light through from behind with great impact.

The 5-piece band were positioned upstage of them on a series of risers.

The mid truss was rigged with 4 x Robe BMFL Spots and 4 x Chauvet Rogue R2 washes. The BMFLs were key backlight on Hurts and also ideal for lighting the pillars as were the washes which also did a lot of work on these striking scenic elements.

The mid truss was also used to suspend the Sceptron chandelier in the centre when there wasn’t room for its own dedicated truss.
The U-shaped rear truss was a 40ft/ 12 metre straight run with a 3m extension each side at a 45º angle. Seven BMFL Spots were rigged on outriggers off the top rail and 21 x R2 washes on the bottom chord all the way around the U, four on each ‘side’ portion of truss and 13 spread out across the 40ft span.
All the trusses were bordered in the same paprika red velvet fabric as the back curtain to complete the RED theme. 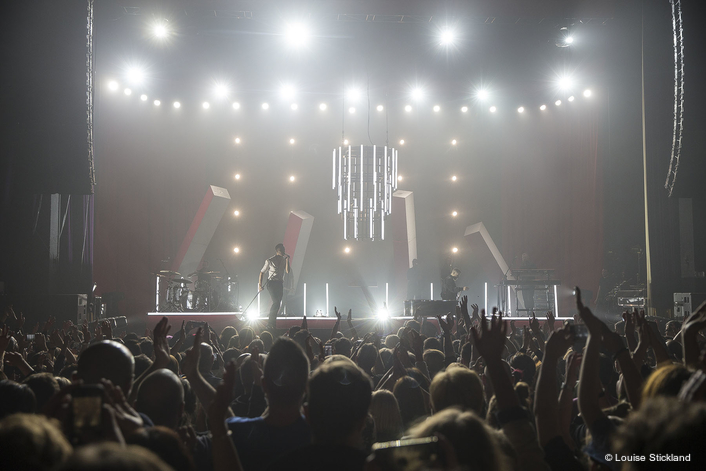 On the floor were another 12 x BMFLs. Two each side downstage to cover the front line and  one per side upstage to cross light onto the band and the pillars, with six evenly spaced between the pillars upstage for potent floor-based backlight through the band. These could also be used for additional pillar illumination … and occasionally for up-lighting the drape, although this was mainly taken care of very nicely by the R2s around the top of the U-shape truss.

Matt likes the BMFLs for their brightness, the crispness of the light, the speed of movement (especially for movement during black resets) and the excellent gobo set. He’d not used R2 washes before, but found them bright, reliable and well colour matched.

On the back of each band riser were four evenly spaced 1m Sceptrons rigged vertically – attached to special brackets integral to the risers, with a 32cm  and two x 1m Sceptrons  rigged horizontally along the front edge of each riser.
This type of finishing detail is characteristic of many Rob Sinclair designs and Rob’s dynamic and multi-layered approach to presenting a visual picture rather than just ‘lighting a band’!

Rob and Matt both comment that H at Colour Sound was “instrumental and extremely helpful” in ensuring they received the rig they wanted, and Matt adds, “the gear came out of the warehouse meticulously prepped and Sam and the crew have been fantastic!”

Sam and Jonnie are mates as well as colleagues which Matt reckons has been a real bonus during this tour especially the more challenging opening two weeks of gigs where everyone really did have to think laterally every day, and work hard and inventively to get shows on in some extraordinary circumstances … including one 6.30 p.m. get-in at Lviv, Ukraine.

“The venue was a dilapidated velodrome built in the 1980s that hadn’t had a penny spent on it since!” Explained Matt, “it featured by far the longest load-in push of the tour, and the dodgiest ramps I have ever seen! Of course we scaled it back, but we were in and up-and-running in three and a half hours” ... for a show that night!!!

He added that the show was “amazing, the fans went wild and the band had a great time!” a reaction that made all the effort and stress worthwhile many times over.
Matt ran all the lighting from a Jands Vista console, creating a lively and colourful mix of looks and scenes, plenty of contests and drama that kept pumping to the end of an invigorating and enjoyable live show.
The tour re-starts in Vladivostok at the end of January 2018.