A stylish and harmonious combination of intelligence and impact was the lighting vibe for the latest UK tour by rising stars Swedish folk rock duo First Aid Kit, of which the final section featured their largest toured production to date. Matt Waterfield is their LD and the lighting equipment was supplied by west London based Colour Sound Experiment.

Matt has worked with the band since 2013, and this itinerary of UK theatres was the latest section in their “Stay Gold” album campaign which started in May 2014.

As with most tours, the design has developed over the course of time, and earlier on Colour Sound had supplied a floor package, so when it came to upping the production they again offered an excellent deal that ensured Matt had the tools he needed to make the show rock! 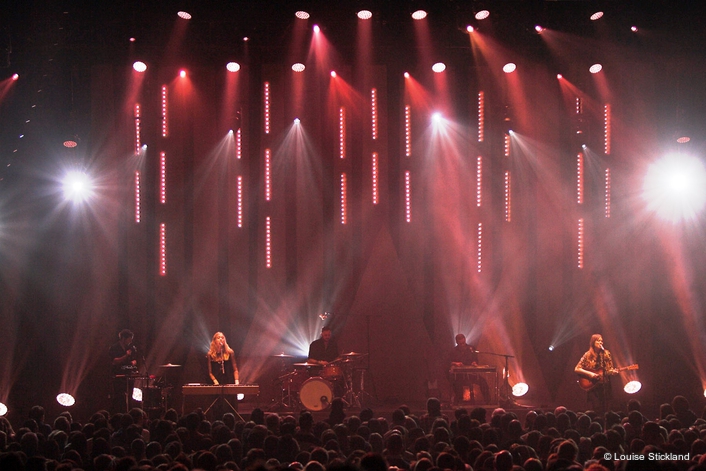 The stage design started with a large semi-transparent gold Joel Flex backdrop upstage, supplied via Hangman. For this part of the tour, a set of black fabric columns were hung in front of this to break up the solid gold and add depth. 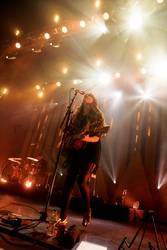 Downstage of the cloths were five scenic triangles – of three different sizes - made from aluminium frames covered in stretched pieces of gold Joel Flex and fitted with internal festoon lights … for some sparkly effects. The set pieces were designed to be scalable and expanded or shrunk to suit the available stage space.

Overhead were three trusses – front, mid and rear – with the drapes truss far upstage which was also used to rig 26 vertical Chauvet LED battens. These remained hidden and then burst into life at strategic moments blasting through the drape creating a bit of a surprise. They were pixel mapped and used for tumbling and liquid effects.

There were also two 3 metre long ‘wing’ trusses flown either side at the front to provide additional side lighting positions in the larger venues.

The Pointes were spread out across all the three trusses, on drop bars for some variation at the back and also on the wing trusses, and used to fill the space with striking beam looks which included a lot of subtleties and visual texturing. Matt further maximised their multi-functionality using them as beams, spots and washes at different times – effectively he says ‘It’s like having double the fixtures”. 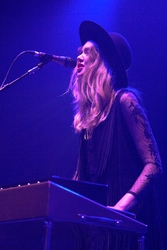 The floor package earlier in the tour had included six Pointes, which proved a good testing ground for exactly how many different looks he could get out of them.

Four MMX Spots were positioned on the back truss, six on the mid and one on each wing truss. The LEDWashes were also on the back, mid and side trusses, and used for all the general stage washing on the girls and the band. Matt likes them for their small size, light weight and excellent selection of colours including pastels and secondaries.

The B-Eyes on the floor were new for this section of the tour and they made a big difference, adding depth and highly visible effects either on their own or combined with the Pointes. ‘You can get such a great range of looks out of the B-Eyes” he comments, “From single cell beams to complex shapes with duo colours”.

The most important thing, he explains, was to keep the Girls – Johanna and Klara Söderberg – well lit and right at the front of the action. This lighting oeuvre supported their performance and also brought a slightly classic retro 1970’s fashioning to the stage with the set pieces … “But just a bit cheekier,” adds Matt!

He has really enjoyed the tour and working with the band generally. “The vibe is positive, they are doing really well and everyone involved is extremely pleasant,” he adds.

Working alongside him for Colour Sound were a top crew team of Frankie McDade and Chris Brown, who were “Amazing” states Matt. 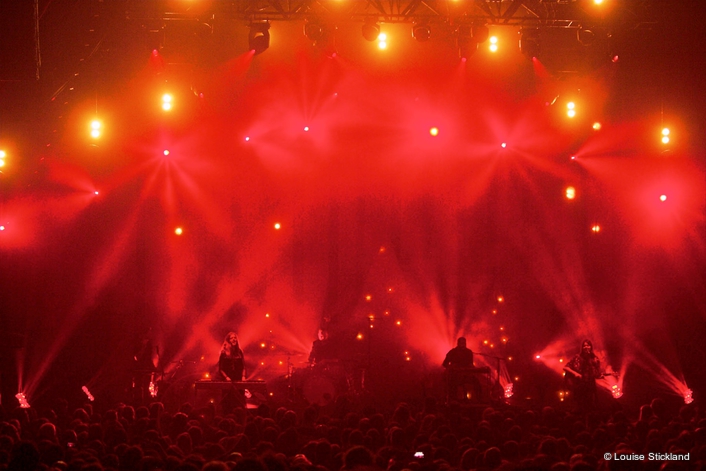 Colour Sound’s Haydn Cruickshank commented, “It was great to work with Matt and Production Manager Gareth Russell again, and good to see another young band with a unique and different sound and a great future. Matt created a really sassy and very practical design that would work in all venues, and we all look forward to seeing their success continue”.