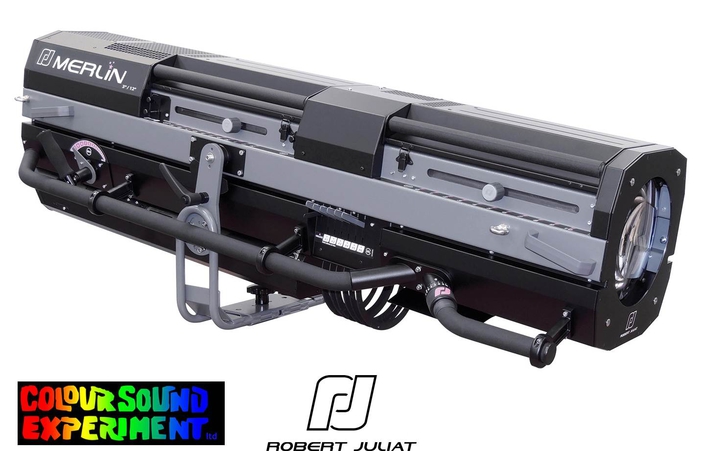 From touring productions to festivals and corporate events, Colour Sound Experiment has come a long way from the company’s early years as a supplier of early moving lights to dance parties and raves.  As one of the first companies to invest in intelligent light fixtures in the UK, Colour Sound continues to operate a firm policy of investing in the very latest products on the market to keep the warehouse stocklist bang up to date.

It comes as little surprise then that the company has chosen to invest in a number of Robert Juliat Merlin 2.5K HMI Followspots.  Project Coordinator, Alex Ryan explains why: “Much of Colour Sound Experiment’s market now is servicing the larger concerts and touring bands, so it is great to have a properly designed followspot that caters specifically for the rock and roll market.

“We’ve had Robert Juliat Super Korrigans in our stock since they were first introduced, but Merlin is the first proper 2.5K followspot that has been designed specifically for the demands of touring,’ he continues.

“One of the key features that attracted us to the Merlin when we initially discussed this purchase with Lee House from Robert Juliat’s exclusive UK distributor, Ambersphere Solutions, was the amount of ‘tour-ability’ that has been designed into it. Robert Juliat quality is always a given, but the Merlin goes a step or two further.  Performance-wise it has a brilliantly even, bright throw; it more than holds its own against videowall and LED technology.  But from the integral ballast to the smooth design without any external catches, and the rapid post-show cool-down system, it is clearly a spot that has been designed with the touring sector as its primary market.”

Colour Sound sent the Merlin spots straight out to work on the recent WWE Wrestlemania Revenge Tour where the arena sized venues demanded the very best in followspot performance.   Crew Chief, Sam Campbell was impressed, “In every aspect of touring, rigging and setting up the Merlins, we were very happy with them. They are easy to set up and use; lightweight, and with an integral ballast that makes handling so much easier as there is one less thing to remember and transport to the distant, tricky rigging positions that followspots often occupy. In arenas that can be a long and awkward journey.

“The Merlins are reliable, and have a beautiful light with an extremely flat beam. On this tour they are being used as the sole keylights for entrances, exits and presentations which is pretty impressive. And we love the fact that they require no lamp adjustment.  The followspot operators really enjoy using them and loved the USB port that allows them to charge their phones! In fact, on a few occasions in venues where we’ve had to use a combination of house spots and Merlins, we found the spot ops fought to be on the new Merlins!”