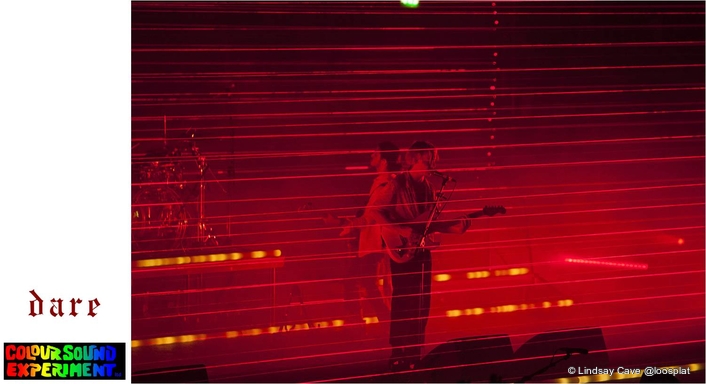 The Hunna are one of the UK bands hotly tipped for great things in 2018 – a young stylish looking foot-tapping mix of indie rock, compelling lyrics and great tunes – with their forthcoming album ‘Dare’ due for release at the end of May. Lighting designer Tom Campbell of design practice MIRRAD created a cool and dynamic looking visual show for their recent UK tour, for which London based Colour Sound Experiment supplied lighting, rigging and lasers.

Tom landed the gig at the end of 2017 – he’d already met the band when they were opening for another of his bands, The Coasts. They liked his work, and when the time came for The Hunna to step up a level and get a designer on-board, Tom received the call.

He worked very closely with band members Ryan Potter and Dan Dorney, both guitarists who take a keen interest in their stage look and presentation which, Tom observes, makes his job “a lot more worthwhile”.

To get the design process started, they sent him details on every song they play including BPM counts, mood boards and applicable thoughts / vibes, which enabled Tom to be very creative and head in the right direction from the off. 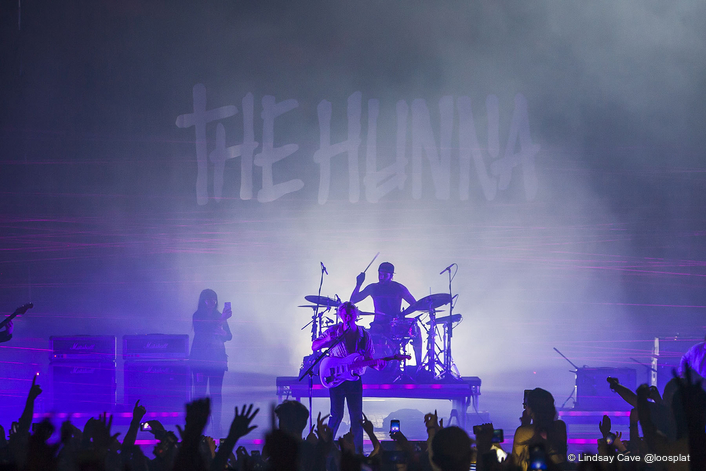 He was keen to use lasers in a fresh and invigorating way and specified RTI NEO SIX fixtures, a laser light beam array with 6 single whitelight / RGB diodes, zoom and strobe on each individual diode and pan / tilt functionality.

In this case, as they were in such close proximity to the band, to avoid any accidental audience scanning, the tilt parameter was disabled.

To make this happen, Colour Sound had to compile and complete copious amounts of H & S paperwork, and all the artists had to be thoroughly briefed on the safe zones and where to stand, but the striking end-results definitely justified all the effort!

The NEO SIX units were staggered in height by 2 inches, so with stage left and right units combined, the beams criss-crossed one diode apart, making 36 beams per pair of trusses with narrower gaps. With a total of 108 laser beams – and LOADS of atmosphere from MDG low foggers and hazers - this worked highly effectively, bringing a new take on creative lasering. 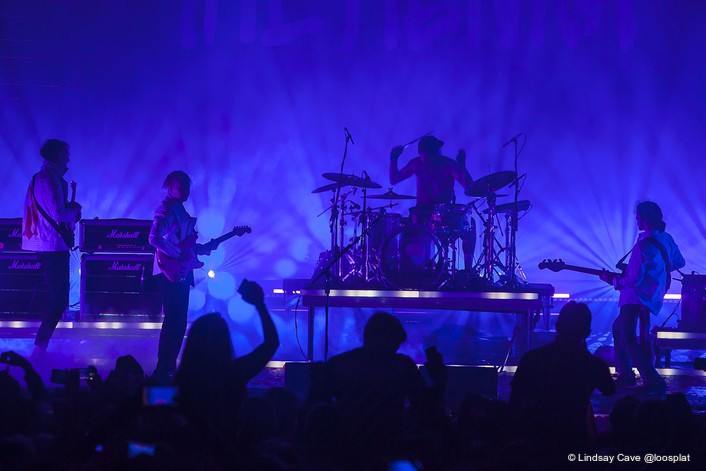 The band were fully aware of how they could / couldn’t move during the laser numbers as Tom aimed to dramatically change the shape of the stage and create “abstract worlds” in which they could play” and penetrate the ‘cage’ with hands or guitars.

He had originally used the NEO SIXs on Bullet for My Valentine at the end of 2016 but in a more standard way. He was impressed with the performance and awaited an opportunity to use them in a more imaginative context.

Custom wooden cladding panels were created by Colour Sound and fitted to the back of the HUD truss as an additional safety feature to stop the laser beams spilling into the stage wings.

The main lighting fixtures were 37 of Robe’s new MegaPointes – Colour Sound was one of the first companies in the UK to invest in these - and Tom was hugely impressed!
He’d first seen them at PLASA 2017 and when he was discussing beamy looks with the band, another aesthetic on which they were very keen, he knew the MegaPointe would be the right fixture.

Nineteen MegaPointes were hung on 12 ft. drop-bars above the stage to give the illusion of floating in space, with another 16 on the deck. Of these, eight were upstage and four a side stage left and right for low level cross lighting. With no front truss, these were vital to help illuminate the band and the mid stage area.
Six Robe LEDWash 300s were used as footlights along the front of stage. Tom comments on the “amazing tungsten emulation” from these which was ideal for replacing traditional floor PAR cans. 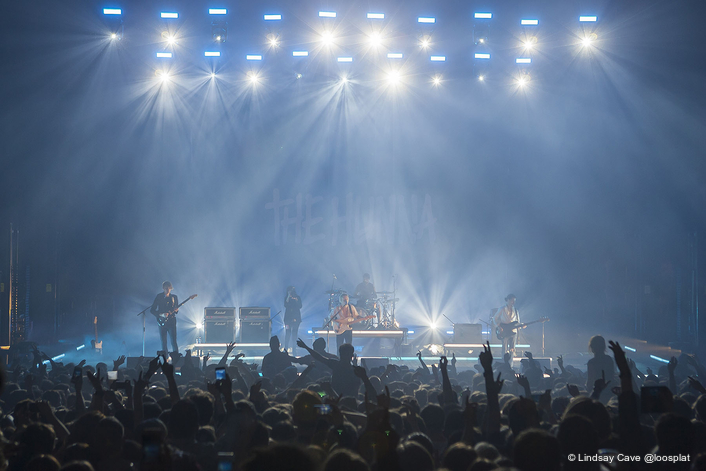 In fact, this was the first tour he has completed with no tungsten sources at all apart from 10 Squirrel-cage lightbulbs which lowered in on a pair of Wahlberg DMX winches triggered via the lighting console during the song “Sycamore Tree”. These were on the back truss and came in behind the band.

In addition to that he had 29 x Philips Nitro 510c LED strobes which were used both as strobes and also for the roles of CTO blinders and washes. Nineteen were on the same drop bars as the MegaPointes, rigged just above, with the remaining 10 on the floor. Tom notes that they are “incredibly” versatile due to this multi-functionality.

Seventeen GLP Impression X4 Bar 20s were positioned nine upstage, butted up together in a 9 metre long run, and four along each side to box off and define the sides of the stage, especially during the laser numbers, where the two lightsources worked complimentarily. 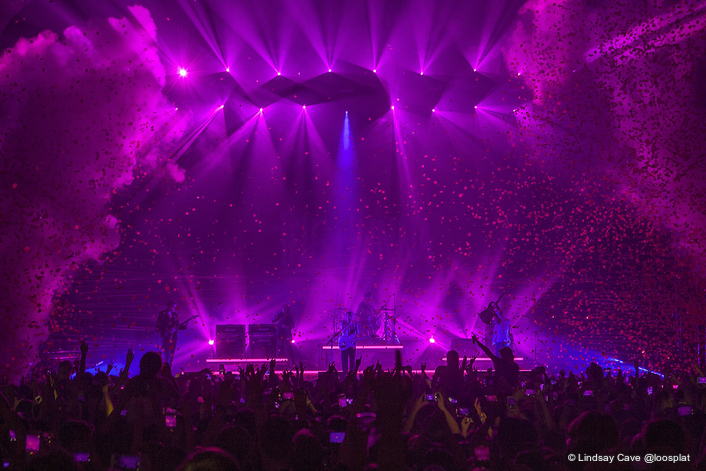 Twenty-nine metres of Martin Sceptron LED fixtures, complete with smoked diffuser tubes, were positioned on the downstage edge of the stage, mid-stage and on the risers, where they added texture to the set and highlighted specific areas. They were also congruous with the linearity of the laser looks.

Completing the lighting picture were 10 x Chromlech Elidy panels, a 5x5 warm-white LED matrix again chosen for excellent tungsten-style characteristics. Six each were rigged on the two mid-stage LED towers to give a wall of tungsten effect.
The console was an Avolites Sapphire Touch, with another running in tracking backup and two TitanNet processors. They were controlling a total of 16.5 DMX universes.

It was also the first time Tom has toured using Colour Sound as a supplier … which was an incredibly positive experience. Alex Ryan was the Colour Sound project manager, and he ensured that it went “extremely smoothly in all respects” stated Tom. 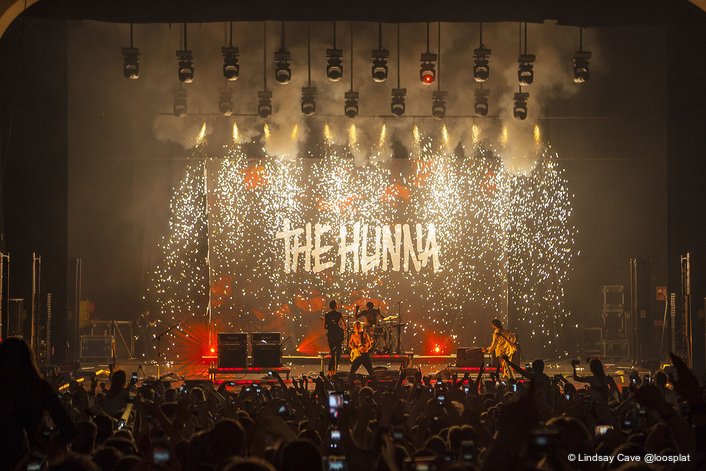 Alex Ryan commented, “It was a great pleasure working with Tom. We were really impressed with his work, the attention to detail and the interesting visual approach which produced a stunning and unique looking show. We are all looking forward to future designs”.