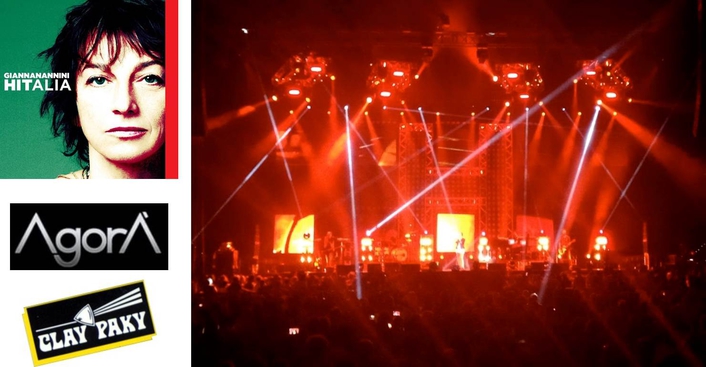 Gianna Nannini's most recent, long-awaited HITALIA.ROCKS tour brought the star live to major sports arenas in Italy. This tour followed and celebrated the release of Gianna's latest album, HITALIA. The entire album is devoted to the most beautiful Italian popular music songs of the twentieth century, performed for the first time by Gianna Nannini with her unique, unmistakable voice.

The lighting designer Carlo Pastore and Gianna met professionally for the first time in 2011, in  a show where Patrick Woodroffe was in charge of setting up and directing the lighting design. That tour was entrusted to the care of Eneas Mackintosh, a big name in live events and founder of Lime Light.
At the time Carlo Pastore was a programmer and Eneas's lighting assistant. During the second part of the tour, he was put in control of lighting desk operations and that was when he met Gianna Nannini.

“We met again this year - for the first time since 2011 - for the HITALIA.ROCKS Tour, thanks to Live Nation Concerts, an agency that produces shows for artists from all over the world. We came up with several ideas and designs and presented our concepts using three-dimensional WYSIWYG views.

One of our ideas hit the nail on the head. There is a simple, effective symbol with great visual impact on the stage backdrop: a large "H", which is the first letter of the name of the album and appears in its graphic design. This H is not only found in the stage scenery, but also on the tour gadgets, T-shirts and all the merchandising.

The idea came when looking for a symbol that would evoke a clear rock image and be able to strongly characterize the scene, where Gianna moves with her usual energy. We also wanted something reminiscent of the simplicity of Italian rock music in the 1960s and 1970s, but with a modern twist.

Besides working in my usual role as lighting designer, it was a very special occasion for me. My ideas about the show and the solutions I proposed and worked out on a multitude of drawings were appreciated and the artist agreed to them. 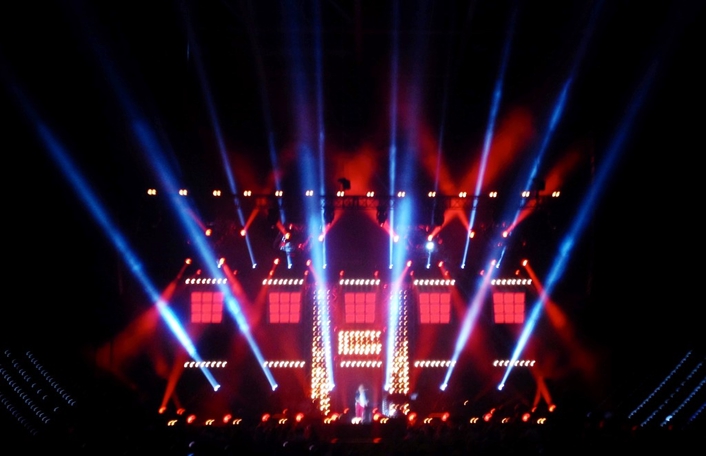 The clean look of the scene convinced me to integrate the systems needed, including the light, video and audio systems, structures and lights themselves, into the stage structure. I asked the producers for several Clay Paky lights, including 28 Alpha Profile 1500s, Clay Paky's powerful, silent beam shapers, able to generate countless shapes in multiple dimensions. Their light output is most impressive. I used a battery of ten for backlighting on the ground, another ten on the back truss and on the ground again for backlighting, and four on each side for side lighting.

Fourteen powerful nonintrusive Sharpys are everywhere on the stage and produce beams that are so focused and aligned that they create shafts of light in the sky and spectacular mid-air visual effects together with the gobos.

While the design of the overall project proceeded, I took part in choosing the order of the songs - together with musical director Davide Tagliapietra and Gianna Nannini - according to the degree of artistic inspiration the pieces could offer the concert director.

During the first part of the show, the big "H" is hidden by a grey curtain, a classic sharkstooth scrim. LED screens were cut to size and stuck inside the letter H under the grey scrim. This gives the stage a crisp look, designed to evoke the simplicity of the television image of the old Sanremo Music Festivals. The lighting and the black and white colour choices, which the selected songs inspire, prevail. 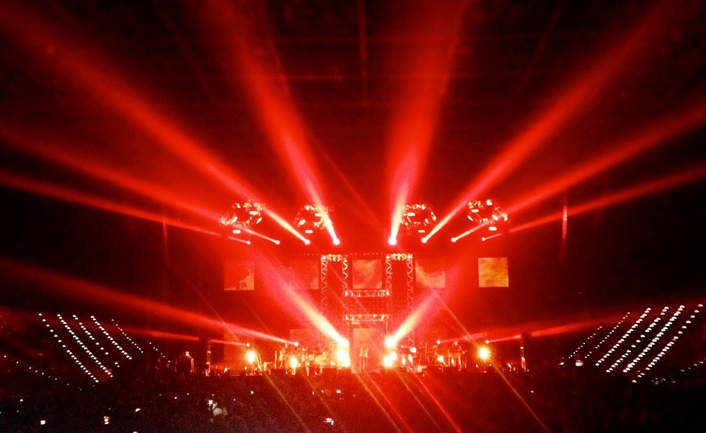 Later on, the Kabuki scrim (a drop curtain with electromagnetic release controlled from the desk) drops from the backdrop and reveals both the big letter H and the video arrays. At that point, the lighting turns into an explosion of colour and visual effects thanks to the Sharpys and the videos based on the Director's artistic choices.

The show, and the synchronized management of all the effects in particular, are handled by a Grand MA 2. With this choice, you can always count on continuous impeccable assistance in Italy thanks to Molpass, Marco Castellazzi and Angelo Di Nella.

The tour service company is Agorà.