Masters of Rock AC/DC’s Rock or Bust Tour thundered through Europe and the USA bringing night after night of head-banging delight to hundreds of thousands of fans. The grungy, buffalo horned, ‘Mad Max’ style arena spectacular is the inspired work of Ray Winkler of Stufish Design and Patrick Woodroffe of Woodroffe Bassett Design Ltd  sees lighting and set seamlessly welded together in an imposing corrugated steel clad domed stage.

Peppering the corrugated iron façade is a large number of Clay Paky Sharpy Washes, positioned inside transparent protective domes. These fixtures are barely visible until they strike up to bring texture, colour and dimension to the set and to bathe the audience in sharp, randomly angled, acid coloured light. 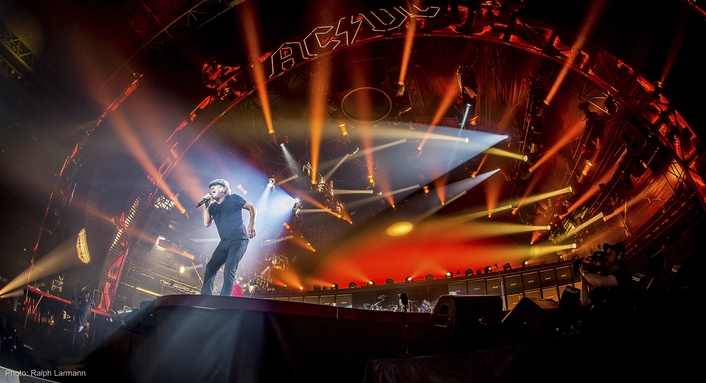 “AC/DC’s identity is distinct, they’re a straight forward rock and roll band,” states Woodroffe. “We wanted to reflect that in a way that’s engaging, yet reminiscent of the old days. This is a big arena show and it has to be scalable. It has to have spectacle and it has to give 60,000 people a night something interesting to look at for 2.5 hours.”

And indeed it does. Fans across Europe and the USA have been delighted to see that the customary exploding cannons, massive Hell’s Bell, distinctive wall of Marshall Amps and giant inflatable Rosie are still bathed in chunky dynamic beams of boldly coloured light.

A number of Sharpy Washes are also used on top of the signature for AC/DC upstage wall of Marshall Amps providing an array of stunning aerial effects.

Cosmo Wilson is AC/DC’s Lighting Director: “Sometimes, I have nothing else on but the Sharpy Washes to create a great background for several intros of songs. I love to programme them to sweep down to start songs – that’s a great look as well! They really are great for ‘eye candy’.” 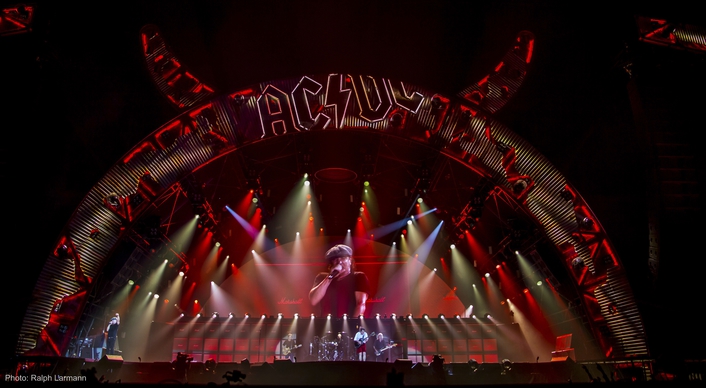 Equipment is supplied by Upstaging in the USA, and by Neg Earth for Europe, and fixtures have been chosen for their power and versatility as Woodroffe points out: “We were looking for powerful, bright lights with tight beams and some hard edge source points. We chose a variety of fixtures including the Clay Paky Sharpys and Sharpy Washes.”

The current tour runs until December 15th when the band finish their Australasian leg at Western Springs Stadium in Auckland. However there are plans to extend the tour into 2016.