BlackTrax for Beauty & the Beast 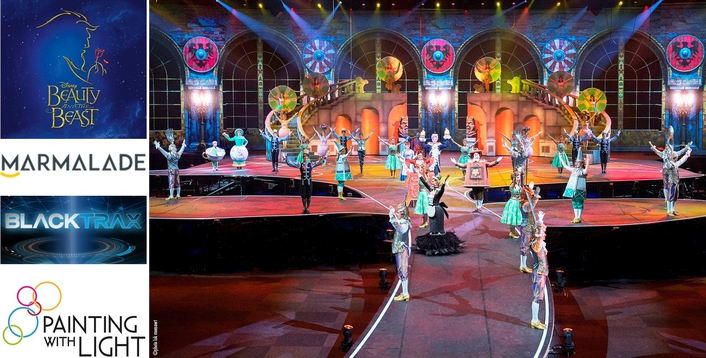 International creative design practice Painting with Light was commissioned to design lighting and a video system, plus produce video content for the recent staging of Disney’s famous ‘Beauty & the Beast’ musical by Marmalade in Hall 8 at Ghent Expo in Belgium.

The Belgium based company’s Luc Peumans also seized the opportunity to use their new BlackTrax real-time motion tracking system for the first time on a major production … to ensure that all the principal cast members were perfectly illuminated as they moved around the performance space.

When Luc came on-board, the set designed by Stefaan Haudenhuyse - under licence to Disney with the producers having to meet certain criteria – was already initiated. Spectacular and dynamic, it was based around a 50 metre long performance area in the shape of a rose in the centre of the hall with audience seated 180 degrees in the round. Upstage of the ‘stage’ end was a large LED screen backdrop which split into four sections and tracked into different configurations.

The show, production managed by Bart de Coensel, also featured  multiple flying props and scenery pieces which came in and out throughout, including large objects like show portals to books from the library and trees from the forest scenes, church windows and a host of others.

Luc – working with associate lighting designer Carlo Zaenen - created a series of ideas about lighting the show, while Jos Claesen produced the video content which had to be approved by the executive producers at Disney.

A mother grid was installed in Hall 8 and a series of lighting trusses flown from this above the stage and auditorium, ensuring optimum lighting positions all over the space including down the sides of the room.

These fixtures were used for many different purposes, from specials and key lighting to drama and effects to base washes and highlighting the stage and eye-catching set in this colourful and vibrant show.

The URC Zoom 2010s were divided between overhead and floor / stage positions and were instrumental in lighting the myriad of moving scenery objects and props as they flew in and out.

Luc chose all three types of fixtures because of their ‘multi-purpose’ performance and ability to cover all bases. Time was tight – 15 days from the WYSIWYG Studio to the first show with a massive amount of multi-layer cues in the console - so it was also expedient to concentrate on three main types of lights for rapid and efficient programming. 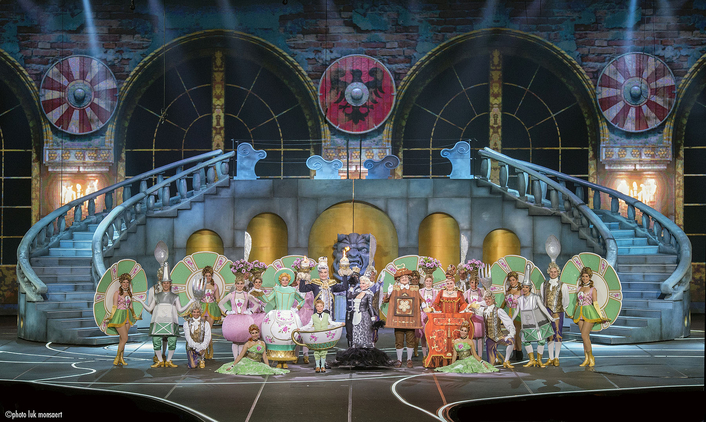 In 2016, Painting with Light invested in CAST’s powerful award winning BlackTrax system and became Belgium’s only certified ‘BlackTrax Expert’. This production was the first full scale show on which it was used, proving highly effective for controlling lights that tracked main cast members as they moved around the set.

The system was linked to a number of Viper Profiles and Sharpy Washes plus other lights at the front, on the back trusses and all along the side trusses.

For this show and venue where multiple follow spots would have been required that would have been difficult to rig, this proved an ideal solution saving time and budget, although time also had to be allocated in other areas. “Using BlackTrax, it was incredibly easy to bring the focus to exactly where it was needed … and very quickly,” stated Luc.

To make it all happen, Luc’s crew collaborated closely with the Wigs & Costumes department. Every actor being tracked by the system needed to wear an extra beltpack and have three 5.5mm balls integrated into their clothes which were also visible to the BlackTrax cameras, a delicate and intricate task involving 24 costumes which were designed by Cocky van Huijkeelom.

The 12 x BlackTrax cameras were rigged on the two long side trusses, six per side, where they had a complete view of the performance area.

Their feeds were routed to the BlackTrax server which contained a 3D model of the stage, running a custom version of WYSIWYG which talked to the selected lights through a Luminex network. Different fixture parameters can be selected for control and different zones can be established referring to different lights or groups of lights.

For this scenario it was a perfect solution, and for Painting with Light, this is just the start for a system which has “massive potential” across their varied and diverse projects. 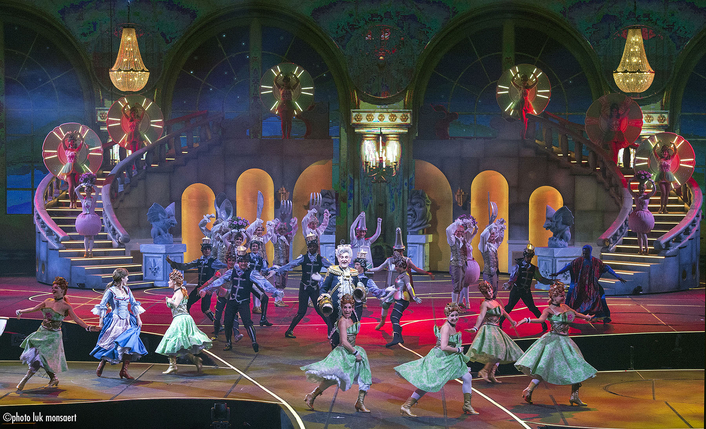 Another quad-output Pandora’s Box fed video to the main screen upstage – which split into the four sections – plus two static ‘wing’ LED screens flanking the stage, also triggered from the same grandMA2 running the lights. The hardworking console was supplied with a fully redundant backup, and the final showfile even triggered some of the automation cues – controlling DMX winches from WIcreations who were co-ordinating the production’s automation – flying some of the props in and out.

The large staircase and set portals also had LED practicals embedded which were run from the console.

In addition to these, Painting with Light devised and supplied several LED specials, including the 12 pairs of blinking red LED ‘wolf’s eyes’ for the forest scene … which sent shivers up a few spines!

LED candle flames worn by actors were wirelessly controlled and integrated into the lighting control system for the lavish, mouth-watering ‘Be Our Guest’ scene, and the illuminated plates on the backs of chorus members in that scene were also manufactured as a bespoke effect for the show by Painting with Light.

They enjoyed superlative support from BlackTrax in Canada in the form of engineer William McDaniel who was on site for the setup and technical periods, and some great overall teamwork and synergy ensured  the production of a truly world class show. 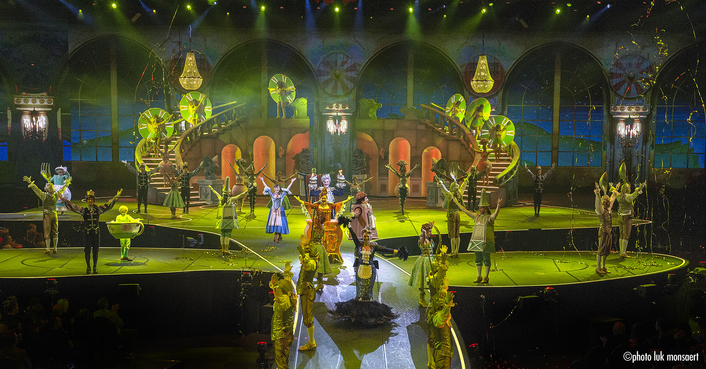 “It was a great honour to work on a Disney classic like this, and a big challenge to guarantee it had all the requisite sparkle and magic that brings the storytelling alive in that uniquely Disneyesque way. It is exacting to light a set with such a large proportion of the performance space in-the-round and pitch the atmosphere just right … and this task energised some excellent camaraderie and harmony between all the disciplines – lighting, video, audio, automation, the directors and producers! It was an amazing achievement of which we can all be proud,” wraps up Luc with a big smile.

Beauty and the Beast
Marmalade
BlackTrax
Painting with Light