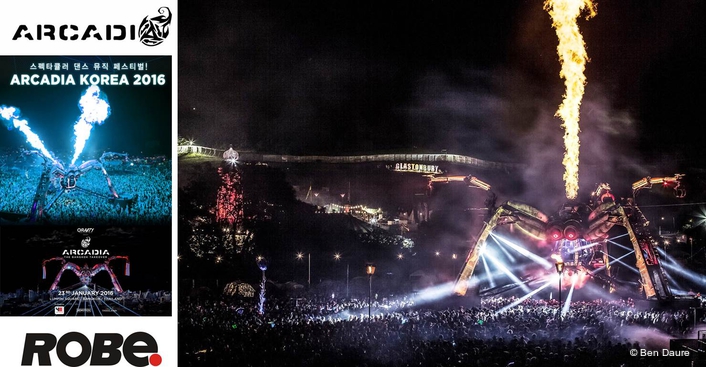 The Spider started its journey at the Glastonbury Festival

Not everyone gets to have their lights gracing a 55 ft. tall, 60 ft. wide, 50 tonne spider made from re-imagined industrial waste and Robe is hugely proud that Arcadia Spectacular chose to invest in its moving lights to ensure this masterpiece of imagination, engineering, resourcefulness and fully immersive performance will have its own lightshow and the highest production values.

The Spider, which started its journey at the Glastonbury Festival circa 2010 when its first incarnation was crafted with love, enthusiasm and some glorious craziness by Pip Rush and Bert Cole, is now gaining widespread international acclaim. As the Arcadia performance concept leads to more and more high profile bookings around the globe, the time was right for them to be self-sufficient in terms of production hardware.

Arcadia Technical Production Manager Tim Smith takes up the story, “We had played a few festivals and been offered substitute fixtures to those on our rider, and with everything ramping up several levels this year, we decided that the best way forward for continuity and to achieve the standard to which we all aspire … was to carry our own lights.

“This allows us to focus on the creativity of the shows and effects, rather than the monotonous task of fixture exchanging and re-programming”.

Sixteen of Robe’s BMFL WashBeams are right at the heart of the lighting rig.

Eight are a special custom version of the luminaire which is a collaboration between Robe and Light Initiative, with a bespoke LED ring around the front of the BMFL.

These are used for the three sets of Spider’s eyes (with two spares!) The eyes are set in reconditioned reverse thrust units modelled out of scrapped Rolls Royce jet engines. The bespoke LED is fed with video content stored on Arcadia’s AI media servers and combined with the vast array of effects from the BMFLs, bring a whole new dimension to the eyes.

Six of the other eight BMFL WashBeams are active, with one rigged on each PA tower around the performance space. “They are absolutely amazing lights, sharp, bright and the internal framing allows us to pinpoint areas on the spider from over 40 metres away,” comments Tim. 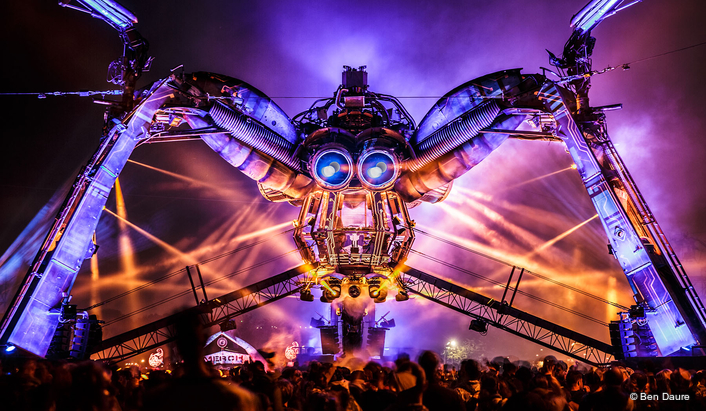 Twenty Robe Pointes join the show, with four each mounted inside the three legs of the structure (previously Customs & Excise scanning machines) and six more Pointes rigged beneath the DJ booth for lighting the core rave / dancefloor area.

Then there are nine LEDWash 600s which multi-task but one of the main functions is for six of them to follow spot the aerialists in The Landing Show and to provide vital rigging and safety lighting during the complex and stunning Metamorphosis show.

For the Landing Show they have been modified with the pan / tilt motors deactivated, the colour and intensity parameters are controlled from the lighting desk and they are pointed by human operators because highlighting aerialists is such a precise and specialised task. They needed a small, neat fixture with a nice yoke, and this is an elegant lateral solution.

Tim, an experienced technical production manager and lighting programmer / operator himself commented, “Robe lights have always been reliable, well designed and excellent quality as well as offering many creative options. I have had nothing but good experiences, so it was an obvious choice. It was a pleasure dealing with Ian Brown from Robe UK and Simon Gooding from Anolis for both this and all the structural LED elements”. 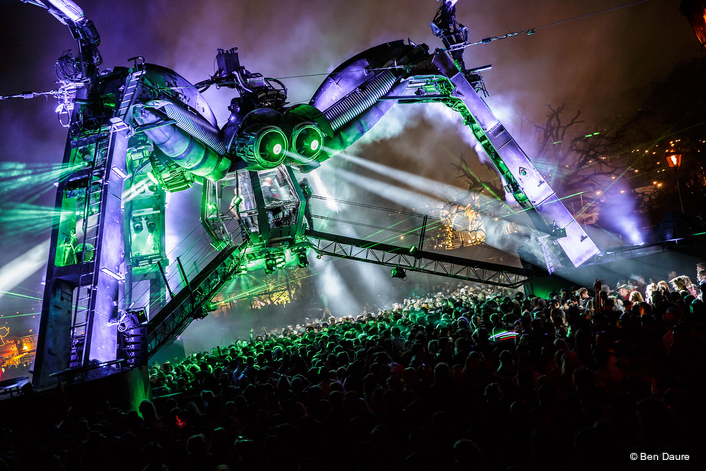 The supply also included a substantial amount of architectural LED fixtures from Robe’s sister company Anolis. Like Robe, the brand is manufactured in Europe and has a great reputation for quality and robustness.

The Anolis elements were mainly completely customised lightsources to illuminate various parts of the Spider. Three different fixtures alone are involved in lighting the legs with 24, 36 and 48 lengths of ArcLine double Outdoor Optic – all fitted perfectly into different leg cavities for a sleek, streamlined look.

The Anolis LED units are effectively ‘dumb’ fixtures on the structure powered from a whole bank of rack mounted Anolis 384 power supplies built into touring racks which are safely stashed away in the backstage area.

Anolis ArcPad 48s and ArcLine Mini Outdoors are used to highlight the crane arms at the top of the spider. The fixtures are mounted on the edges facing back into the arms – and again are perfectly ensconced.

More ArcLine Mini Outdoors are rigged in the DJ booth giving a spotlight effect which is both practical as work-light and subtle as effect light, blending in seamlessly with the other architectural elements.

One of the objectives was to ensure the structure looks great - lit smoothly and evenly - for the countless images and videos that are posted throughout cyberspace so it looks every bit the fantastic spectacle and fully immersive experience that every Arcadia Spectacular really is.