Light Initiative creates the beautiful and the bizarre at Glastonbury 2015 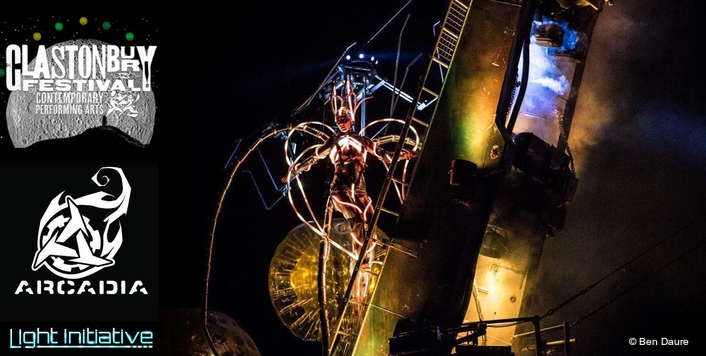 The costumes transformed Arcadia's dancers into fantastic alien/jellyfish hybrids, or "Jellyfish Light Queens", who appeared from the zorbs as if hatching from an alien egg. 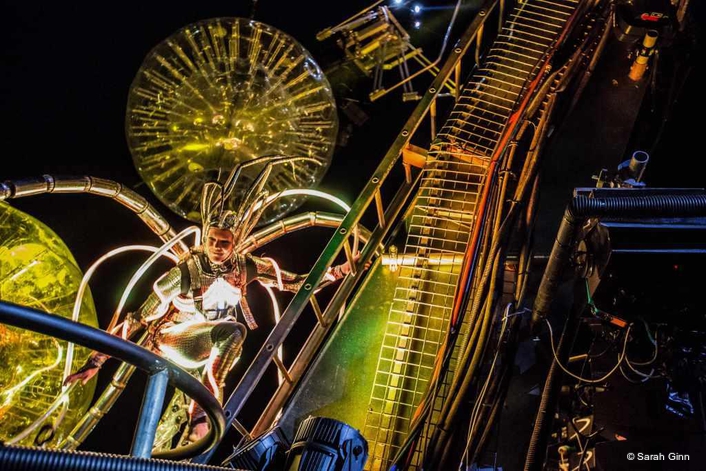 "The moment we saw Jo Peacock's sketch of a performer being released from a zorb we knew the LED solution must be above and beyond anything ever delivered before, and pushing the boundaries of what can be achieved is what really excites us," says Light Initiative's MD Bryn Williams.

LI's immediate task was to develop a fully diffused ultra-high definition LED product in both semi-rigid and flexible versions that would stand out in an incredible performance environment.

"With an Arcadia show, there is always so much going on that for an effect to be noticed it has to pack a huge punch," says Arcadia performer and costume creation project manager Claire O'Neill. "The Jellyfish Light Queens certainly surpassed that expectation and have become one of the show's big new reveals. The roar of the crowd when the creatures bungeed from the eggs and the lights burst to life was incredible."

The costumes also had to meet a rigorous creative brief, with a durability, flexibility, weight and safety proviso.

"As the costumes were worn by aerialist performers, a full range of movement was essential," continues O'Neill. "The wiring was so well stitched into the costumes that we didn't notice it at all. It also withstood being squeezed through a small trapdoor and zorb hole, sat on, shaken about, bungeed and span at high speed, all in proximity to pyrotechnics and flames."

Arcadia's lighting team was able to fully bring the costumes and zorbs to life with Light Initiative's unique control system. 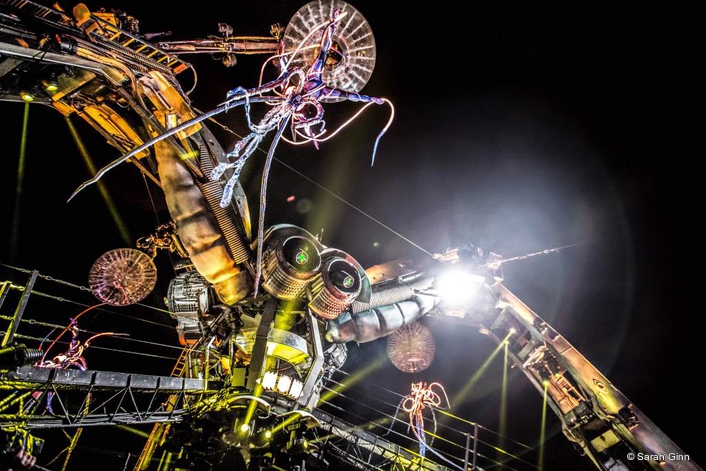 The Electron-V system, an embedded micro media server with integrated LED drivers, was chosen following its faultless performance on the UK's Eurovision entry in Vienna.

The tiny wearable system is designed to operate in radio-degraded environments and has a playback capacity of hundreds of cues for over a hundred hours of content. This, coupled with LI's latest dynamic battery management software, proved a winning solution for Arcadia. 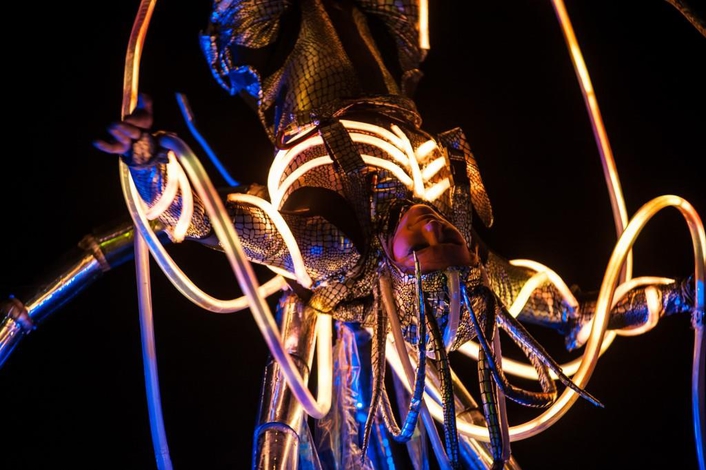 Tom Wall of blinkinLAB created the beat-perfect pixel-mapped content that the Electron-V system pulsed through the LED in time with the show.

"We wanted to visualise Metamorphosis' underlying musical score and sound track by creating various animations," explains Wall. "LI's timecode system was very robust so we could be as precise as we wanted to be, creating animation that highlighted individual beats, melodies and sounds from the 30 minute score.

"LI took care of all the technical aspects of mapping the eggs and costumes, providing us with a template that we used to create the content. We were then able to visit LI's office once the costumes were complete and test out some initial ideas."

Light Initiative was also on hand during the festival to deliver full technical support.

"As all the different disciplines came together on site, we found a lot of technical and scheduling challenges cropped up," continues Wall. "However the LI team worked tirelessly to ensure that the show was up and running in time." 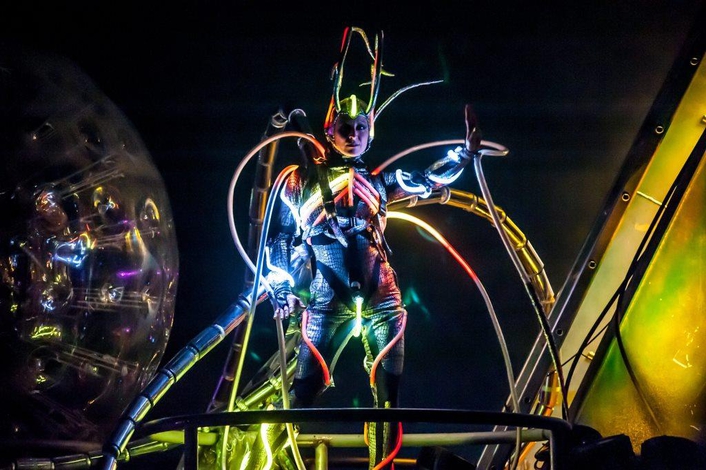 O'Neill adds: "The environment is very demanding as the show seeks to push the boundaries of what has been done before. In addition, the mix of performers and show crew with technology, heavy machinery and pyrotechnics above the heads of thousands of people takes intense planning, concentration and professionalism. Light Initiative was incredible throughout and we're looking forward to working with the team to push the boundaries further for Arcadia Bristol and beyond!" 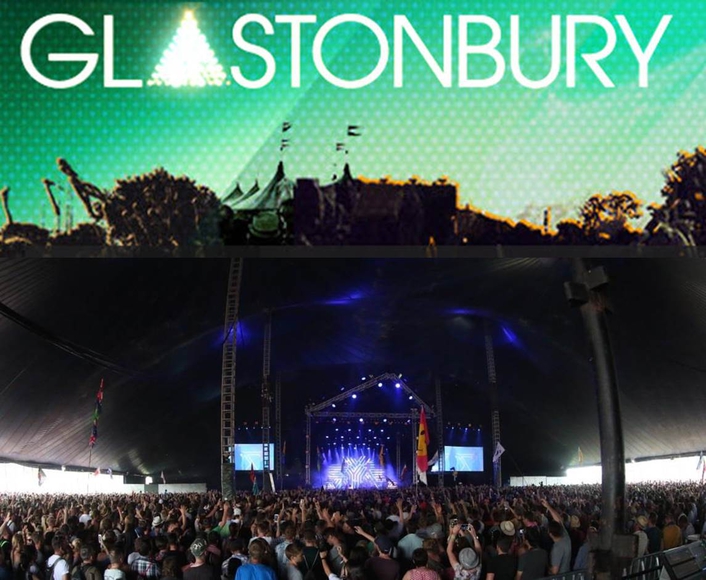 On the other side of the festival, band of the moment Years and Years took to the John Peel stage with their beautifully intricate Light Initiative screen in tow. Built from LED branches, the ingenious structure is an extrapolated version of the band's album artwork for their debut 'Communion'.

"Light Initiative took every requirement of my brief to deliver a unique tourable end product," says Years and Years' lighting designer Squib Swain, who approached LI with his concept at the beginning of the album campaign tour. "As well as looking amazing, Light Initiative made the screen ground supported and free standing with short festival turnarounds like Glastonbury in mind." 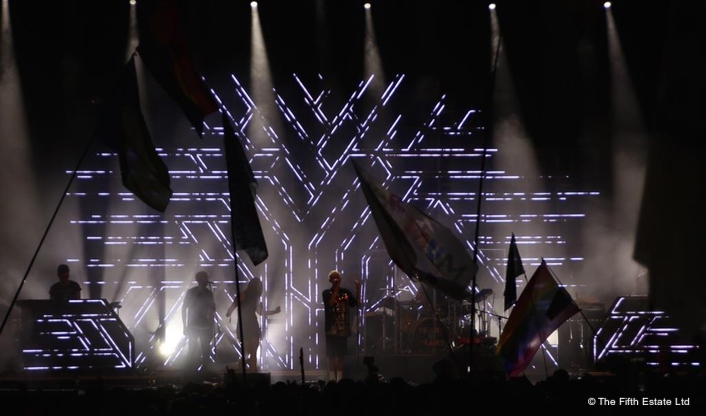 An Avolites Ai Infinity EX8 server powered vibrant content, devised by Adam Young, through the structure. "As LI provided me with a perfect visual representation of the structure in After Effects, designing the content was made far easier. The LED refresh rate of the screen was also fantastic, with the colours I chose in the designing stage perfectly represented in real life."

Squib agrees: "LI turned my vision into a reality and we had an amazing reaction to it from the Glastonbury crowd."

Also playing the John Peel stage was Enter Shikari. The genre bending four-piece brought their new album to the festival, along with their bespoke Light Initiative set piece. 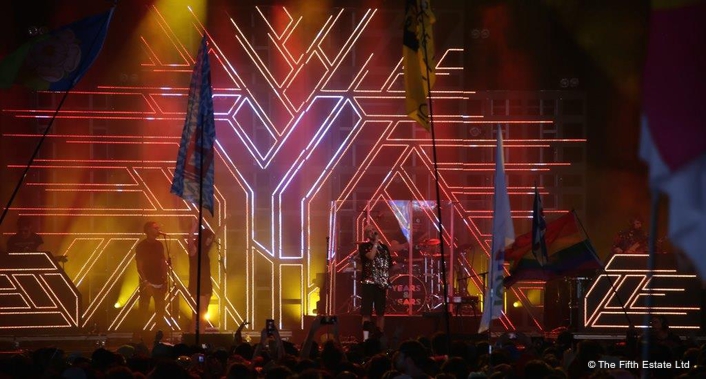 The stunning structure reflects the 'Mindsweep' album concept. For the build, LI decided upon its pioneering controllable LED system 'Intelliflex'.

"Intelliflex has been performing perfectly on this festival run, despite the demanding outdoor conditions and being constantly transported around. It's a fantastically robust system," says the band's lighting designer Steven Bewley, who commissioned the set piece from LI. 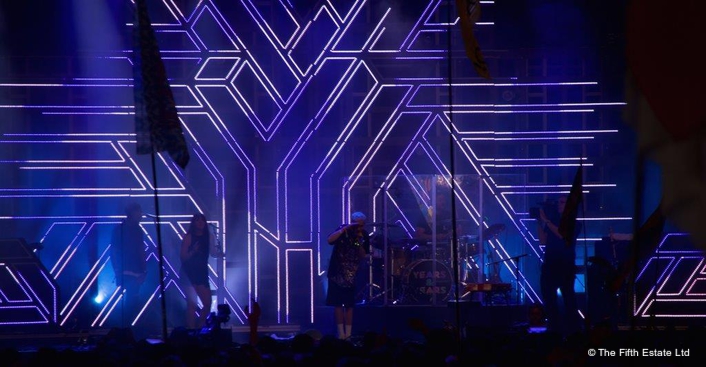 "It's been fantastic to see my concept realised so well," continues Bewley. "Not only did Light Initiative's creation help make a very memorable Glastonbury performance, but an entire tour too."