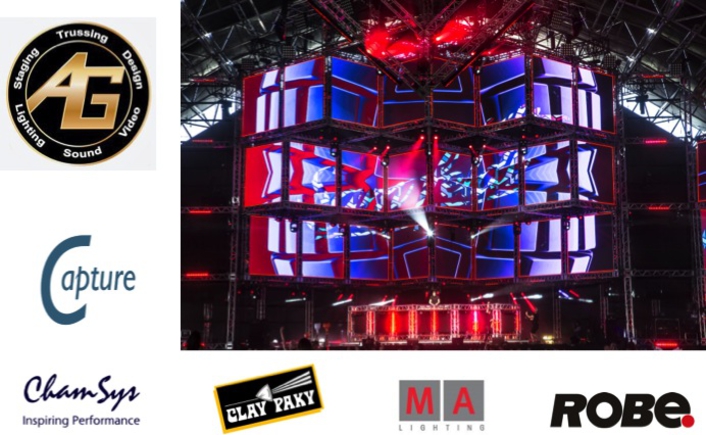 For two weekends in April, The Coachella Valley Music and Arts Festival takes over the Empire Polo Club grounds with music, food and art displays. As in years past, AG Production Services provided the Mega Structures Mini enclosure, rigging, staging, video and lighting for the Sahara tent.

The design of this year Sahara Tent was lead by Koen De Puysseleir and Andrew Gumper. Together, the team worked to transform the Mega Structure enclosure into an intimate, yet visually appealing setting with 3D shapes that bring the audience close to the performers. 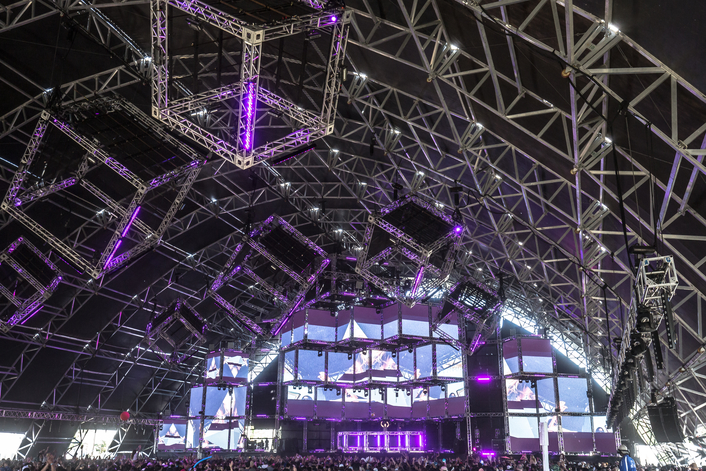 “The goal of our design was to make the Sahara tent feel more like a high-end night club versus a large temporary structure with a stage.” Says De Puysseleir. “With the wide range of music genres that performed in the Sahara Tent, we wanted a versatile, yet visually stimulating experience that would bring the audience closer than ever before.” Continues De Puysseleir.

To help achieve the intimate yet impressive design, De Puysseleir, and Gumper filled the stage with 3D cubes and squares built with truss, video panels between and the edges filled with lighting fixtures.  This provided volume and depth to the stage as well as giving three-dimensional shape with set pieces. 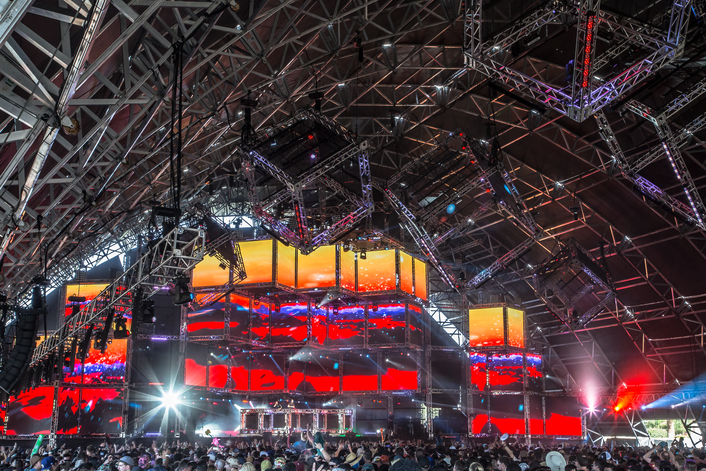 The Sahara Tent had a wide range of performances, from DJ’s to bands. The center section of the 3D cube wall upstage of the performers had garage door type system built into it.  When a DJ performed, the 30’ wide section of 3D wall was lowered giving the full effect of the cube wall.  When a band performed, the section raised up, providing not just additional staging for a band to perform, but also space backstage to setup and roll the band gear quickly onto stage.

“We are taking full advantage of the Mega Structure enclosure this year.” Says Gumper.  The Mini enclosure for the tent measures 188’ wide by 300’ long and 72’ from floor to ceiling at the center point. The entire structure is capable of supporting a staggering 240 tons of weight. “Just over the stage, we are suspending up to 60 tons of gear. In total, the entire package being suspended from the Mega Structure is close to 100 tons.

Over the audience, the design included 9 pods of truss that included lighting and 37mm AG video panels that moved during performances, which added to the 3D environment.

The team faced a number of challenges with the 3D design of the space. “The weight alone!” Explains De Puysseleir. “Under any other structure, this design wouldn’t be possible. The Mega Structures unique design and capabilities offer the freedom of going big with very little stress about if it can support such a heavy system.” Continues De Puysseleir. 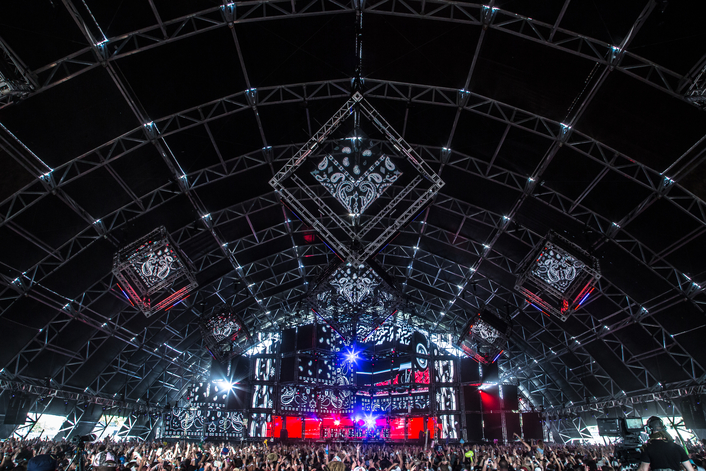 With any festival rig, there is always the challenge of providing a flexible lighting control system that the performers lighting designers can operate while still providing unique looks. De Puysseleir overcame this by using Capture Sweden’s latest 3D visualizing software, Argo.  Combined with a customer MIDI controller and playback all ran through a Chamsys MagicQ MQ200 controller. An MA Lighting grandMA 2 system was available as well for lighting designers. The entire lighting package used a staggering 57 universes for control.